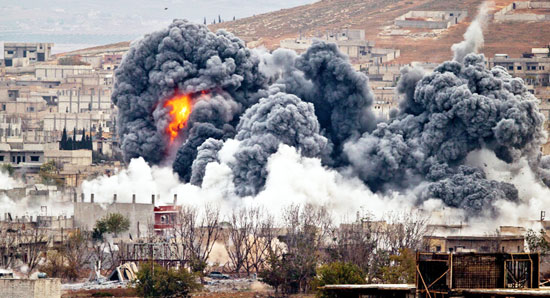 US intelligence officials have admitted to CNN that the US launched the attack against Syria without being able to confirm that a sarin chemical attack had taken place.

On April 14 (2018), the United States led a coordinated attack – along with French and British forces – on the sovereign country of Syria. The attack consisted of hundreds of missiles which were recorded hitting civilian targets and also reportedly struck a cancer research facility. And we are learning that all of it was based on an alleged use of sarin gas for which they had no evidence.

According to a report from CNN on April 18 (2018), US intelligence agencies have admitted that they were not certain the Assad regime had used the nerve agent sarin against civilians – but launched the massive attack anyway.
Officials merely claimed that they were confident Assad did use chemical weapons and that was enough for the attack.

According to CNN, the lack of complete information played a role in deciding not to strike a larger set of targets including airfields, aircraft and helicopters, one defense official said. Others factors, like Russian positioning, also played a role in the decisions.

After the strikes, the French and British governments also released the supposed evidence they had, to justify the act of war carried out by allied nations in Syria. The reports admitted to not having any actual intelligence and the “evidence” was based on “open source” information widely available on the internet.
These open source accounts were little more than videos and testimonies from groups such as the White Helmets – who have been known to create fake videos, support terrorists, and much more.

Recently it was also reported that Secretary of Defense James Mattis attempted to take the constitutional approach to war by seeking Congressional approval before the strike, but he was overruled because that would take too much time, not allow for an actual investigation, and allow for time to the US to be proven wrong about their claims.

As the NY Times reported, Mattis urged President Trump to get congressional approval before the United States launched airstrikes against Syria, but was overruled by Trump, who wanted a rapid and dramatic response, military and administration officials said.

Instead of investigating the alleged attack or following the Constitution, the US government engaged in an act of war against a sovereign country – and they did so based entirely on a hunch.
As CNN notes, the reality was that prior to the US strike, full confirmation could not be made of whether Syria had used sarin in its attack.
“It’s a hard, long process, especially in an attack like this without physical access to victims, site. Therefore we had to work with closest allies quickly to ensure we had confidence in the intelligence picture, enabling policymakers to choose best course of action”, an intelligence official told CNN.

The Trump administration determined a “standard of evidence had been met”, the official said.
What’s more, western journalists, who are actually on the ground investigating the attack, have reported that no such chemical strike happened and the widely circulated video was something entirely different.

As The Free Thought Project reported, critically acclaimed war reporter Robert Fisk published a stunning account of the alleged chemical attack in the Damascus suburb of Douma on April 7, which included testimony from a doctor who works at the hospital featured in the widely circulated video purported to be the aftermath of a Syrian government chemical strike.

In an exclusive first-hand report for the Independent, Fisk, who has twice won the British Press Awards’ Journalist of the Year prize and is a seven-time winner of the British Press Awards’ Foreign Correspondent of the Year, reported:
“This is the story of a town called Douma, a ravaged, stinking place of smashed apartment blocks – and of an underground clinic whose images of suffering allowed three of the Western world’s most powerful nations to bomb Syria. There’s even a friendly doctor in a green coat who, when I track him down in the very same clinic, cheerfully tells me that the ‘gas’ videotape which horrified the world – despite all the doubters – is perfectly genuine.

War stories, however, have a habit of growing darker. For the same 58-year old senior Syrian doctor then adds something profoundly uncomfortable: the patients, he says, were overcome not by gas, but by oxygen starvation in the rubbish-filled tunnels and basements in which they lived, on a night of wind and heavy shelling that stirred up a dust storm.”

Additionally, a report from Douma, Syria, by One America’s Pearson Sharp, confirmed Fisk’s reporting, noting that residents there deny an attack happened and instead claim it was staged by rebel forces in an effort to precipitate a response from western forces.

US Reporter in Douma: Nobody Heard or Saw Anything Like a ‘Chemical Attack’

An American journalist who gained access to the war-torn town of Douma, where the US, France and the UK charged that Syrian President Bashar al-Assad used chemical weapons against civilians, says he found “no evidence” of a chemical weapons attack.

“We were brought in with a government escort and shown the areas where the chemical attack allegedly happened. We were able to speak with residents in the area. We were even able to visit the hospital where the White Helmets showed the videos of people being hosed down”, reporter Pearson Sharp of OAN revealed in a report from the ground in Syria on April 16 (2018).

“When I went into the town, we didn’t know what to expect, but we were brought to one of the neighborhoods close to where the attack happened. I spoke with a number of residents, probably about 10 residents in that neighborhood. This was about a block and a half from where the attack supposedly happened… Um, not one of the people I had spoken to in that neighborhood said that they had seen anything or heard anything about a chemical attack on that day (Saturday, April 7, 2018)” Sharp said.

The reporter said he later spoke with another 30 to 40 residents of the town. “I went up to random people. I know there’s a lot of concern from people that the residents being interviewed are plants – they’re Russian operatives or they’re staged interviews or things like that. We just randomly went up to different people – nobody came up to us – and interviewed probably 30 to 40 people. Consistently, not one person in the town said they heard anything about an attack”, Sharp said.

“When I asked them what they thought the chemical attack was, they told me – all of them – it was staged by the rebels who were occupying the town at that time. They said it was a fabrication or a hoax. When I asked why, they told me it was because the rebels were desperate and needed a ploy to help the get the Syrian Army off their back so they could escape”, he continued.
“Residents told me the terrorists staged this to get Western powers to attack the Syrian Army, so they could escape.”

Following the alleged incident in Douma, Trump, UK Prime Minister Theresa May and French President Emmanuel Macron authorized a military operation to fire missiles at a chemical research facility near Damascus, a weapons storage site and a command base on April 14. Damascus and Moscow maintain that there was no chemical attack by the Syrian state in Douma.

Double standards: US, UK, France stand by Saudis in Yemen but pose as moral crusaders in Syria