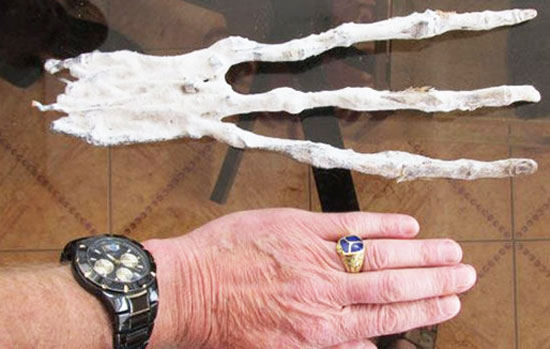 An unexpected discovery that was made this spring has been unearthed in Peru with scientists claiming to have found a mummified 3-fingered alien buried in Nazca.

A video of the body went viral on YouTube after filmmakers at Gaia joined researchers and independent scientists unearthing a 56cm tall extraterrestrial with an elongated skull.

In the video, Professor Konstantin Korotkov of Saint Petersburg University in Russia described the body as belonging to “another creature, another humanoid.”
“We’re going to let you know if it’s human, if it’s non-human,” Gaia have confirmed.

Universities and independent scientists are still verifying the unusual findings and as yet have not confirmed or denied whether the body is proof of alien life.

Is this a primitive human with deformities or the the first verified evidence of extraterrestrials visiting Earth?