The British delegation to the OPCW has admitted that international chemical weapons inspectors did not confirm the origin of the nerve agent used in the Salisbury ex-spy poisoning. 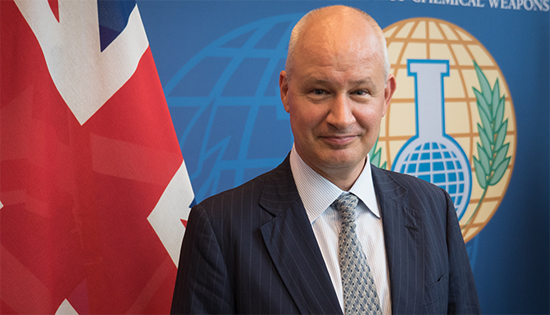 The UK’s representative to the Organization for the Prohibition of Chemical Weapons (OPCW), Peter Wilson, said identifying the nerve agent is an “essential part of the investigation” and that the OPCW has identified neither its origin nor the laboratory where it was produced.
“But of course, while the identification of the nerve agent used is an essential piece of technical evidence in our investigation, neither DSTL’s analysis, nor the OPCW’s report identifies the country or laboratory of origin of the agent used in this attack”, he said.

The British government claims a Soviet-era nerve agent that has become known as Novichok was used against Sergei Skripal and his daughter Yulia and accused Russia of producing and deploying it.
However, the claims of Russian involvement have not been backed up by either Britain’s own scientists at the Porton Down laboratories or the OPCW, both of which say it’s not their job to apportion blame or identify the origin, but only the type of substance involved.

Wilson was speaking at a meeting of the OPCW in Hague, which was called by Britain. The UK delegation reportedly said it would soon give some long-awaited answers posed by Moscow concerning the Skripal case.

The Russian embassy in London submitted a list of 14 questions on March 31. These asked why Moscow had been denied consular access to the Skripals, both Russian citizens. Moscow also asked the British Foreign Office why it had not been informed which antidote had been used to treat the Skripals, and how such a medicine had been made available to local doctors. It also inquired how the UK arrived at the conclusion that the agent used in the attack could only be of “Russian origin”.

In a recent statement to the OPCW, the UK says its accusations against Russia were based partly on “credible open-source reporting and intelligence”. So far, none of that material has been made public. The police investigation into the events in Salisbury is also still ongoing, but the government did not wait for Scotland Yard’s conclusions before insisting that it was “highly likely” that Russia was to blame for targeting the Skripals.

Russia has repeatedly denied the allegations and accused the UK of excluding it from the investigation, as well as destroying evidence. Russian Foreign Minister Sergei Lavrov said: “‘Highly likely’ is a new invention of British diplomacy to describe why they punish people – because these people are ‘highly likely’ guilty. Like in Alice in Wonderland by Lewis Carroll when he described a trial… and the King said: ‘Let’s ask the jury’ and the Queen shouted: ‘No jury! Sentence first! Verdict afterwards!’ That’s the logic of ‘highly likely’.”