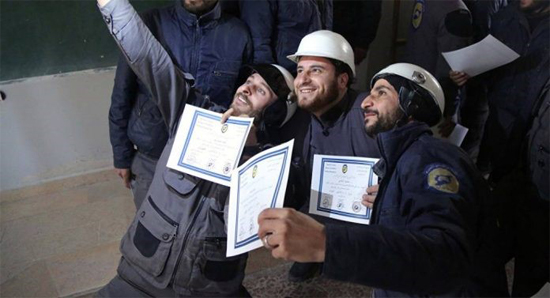 Recently, the White Helmets, a Western-backed NGO known for its ties with terrorist groups, released a video showing alleged victims of the false-flag chemical attack in Douma. The US and its allies used the video as a pre-text to conduct a missile strike on Syria.

The Russia 24 TV channel released an exclusive interview on April 18 (2018) with a boy who participated in filming a fake video, as evidence of the false-flag chemical attack in Douma by the White Helmets. In the interview, Hassan Diab says that he and his mother heard loud voices on the street, urging everyone to rush to the hospitals. When Hassan entered the hospital, unknown people grabbed him, poured water on him and then put him with other patients.

“We were in the basement. Mom told me that today we don’t have anything to eat and that we will eat tomorrow. We heard a cry outside, calling ‘go to the hospital’. We ran to the hospital and as soon as I entered, they grabbed me and started pouring water on me”, Hassan Diab said.

His father continued the story. He was at his work when he heard that his son was in hospital. He rushed to the hospital and found his family there in good health. He added that he was on the street, smoking and didn’t feel any chemical weapon. According to him, it turned out militants gave all the participants food – dates, cookies and rice – and then released them.

“There were no chemical weapons. I smoked outside and felt nothing. I entered the hospital and saw my family. Militants gave them dates, cookies and rice for participating in this film and released everyone to their homes”, Hassan’s father said.

The TV channel also broadcast an interview with a doctor who was in the hospital when the White Helmets filmed their fake video. He said that no patients with signs of chemical weapons-related injuries arrived that day, but there were many people with respiratory problems due to smoke and dust from the recent bombing. All doctors were busy taking care of them and didn’t have time to react to the White Helmets’ film crew.

The White Helmets is a Syrian NGO, financed by several Western countries, which is associated with staging and filming false-flag chemical attacks. They have been seen several times working with terrorist groups in Syria.

On April 9 the group published another video suggesting that doctors in one of the Douma hospitals were treating patients that had suffered from the chemical attack and accused Damascus of the ordeal. However, the information that later surfaced, as well as witness testimonies, demonstrated that it was staged, performed by the White Helmets.

Immediately after the alleged attack, Moscow dispatched its chemical corps to determine whether there was an actual attack and if there were victims in need of treatment. The Russian crew didn’t find any traces of chemical weapons or any victims in the nearby hospital. Moscow and Damascus invited the Organisation for the Prohibition of Chemical Weapons to come to Douma and investigate the incident.