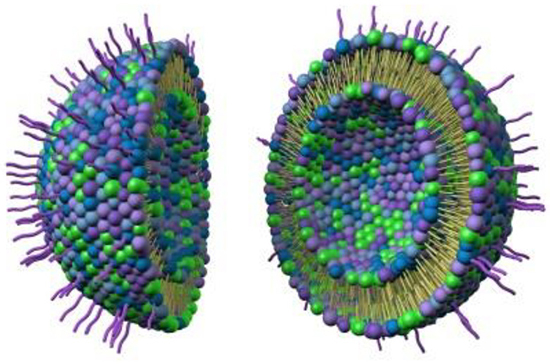 In 2005, James Adair, professor of materials science and engineering, biomedical engineering, and pharmacology and partner Mark Kester, director of NanoStar Institute at the University of Virginia and former professor of pharmacology at Pennsylvania State College of Medicine in Hershey, founded the biopharmaceutical company Keystone Nano with the goal of gaining the U.S. Food and Drug Administration’s (FDA) approval for nanoscale biomedical products.

After years of research and testing, the FDA finally gave the green light to begin phase one human clinical trials to assess the use of ceramide nanoliposome as a possible cancer treatment. With the trials, Keystone Nano hopes to find safe dosing levels and examine the compound’s efficacy as an alternative cancer-fighting therapy.

Providing a greater window of treatment and no side-effects

Ceramide has previously been shown to possess strong anti-cancer properties. Its delicate structure, however, has stopped other researchers from using it in clinical tests to treat cancer. The Penn researchers used nanotechnology to coat ceramide in a fatty lipid layer to improve its stability in the body. This new and improved compound targets tumor cells, penetrates the cellular lining, and deposes its chemotherapeutic cargo in the cancer cell.

“Ceramide is a bioactive lipid that selectively kills cancer cells. At equal dosing, normal cells go to sleep, cancer cells die,” explained Kester. “The problem is it precipitates. It falls out of solution. The only way to deliver it is to turn it into a nanoformulation, which is our intellectual property. Think of it as a very small FedEx truck that delivers on time, all the time but only to the cancer cells.”

Thanks to the extra protective layer, or coating, weaved around the compound, ceramide has been found to have a much greater window of effectiveness compared to current chemotherapy treatments. A window of treatment is the gap between the dosage at which a drug becomes effective and when it becomes harmful to the patient. Therefore, drugs with a larger window or gap will have fewer risks.

Though clinical trials in humans will provide more information and proof of its beneficial effects, dozens of preclinical animal tests have shown that ceramide nanoliposomes are harmless to healthy cells and remain in the body attacking cancer cells for more than a day.

As noted by Adair, their revolutionary targeted delivery system may offer positive benefits over current chemotherapy. The issues with current treatments are the sick-making side-effects and the narrow therapeutic window in which doses of chemotherapeutic drugs that don’t reach the tumor causes harm to the immune system, healthy cells, and the body.

“There’s a whole litany of side effects that cancer patients put up with. About three percent of all patients die from the side effects of the chemotherapy,” said Adair. “We’re very encouraged by ceramide nanoliposomes because the study findings suggest that they could kill cancer while doing little or no harm to the patient.”

Another bonus, the team’s nano formulation preserves the body’s ability to rebuild rapidly, meaning patients will most likely not experience digestive problems or hair loss from the treatment. Nor will their immune systems be compromised.

In phase one of the human clinical trials, the Pennsylvania State nanomedical researchers will focus on improving efficiency and finding the ideal dosage. During phase two, the research will focus on liver cancer – which currently has no cure and kills about 25,000 people in the United States each year.

Next to the fatty nano-jackets, the team is also investigating the effectiveness of calcium and phosphate capsules as another nontoxic, biodegradable way to deliver a chemotherapeutic agent.

Seven Reasons Why the Internet of Things Should Scare You