Chemtrails Represent the ‘No. 1 Health Issue of Our Time’ (2)


‘These Are Horrendous, Historic, Epic Crimes against Humanity’


Russ Tanner is the creator of GlobalSkywatch.com, a leading website on geoengineering, and the Facebook group Chemtrails Global Skywatch. He answers questions by Brian Rossiter in the following special interview, conducted by phone. 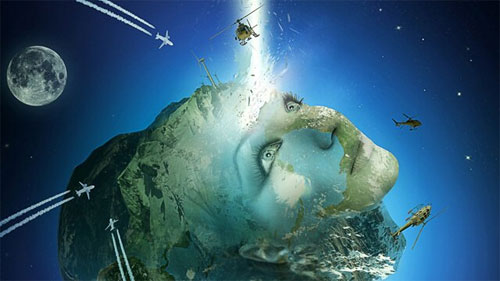 
Brian Rossiter:
I’ve seen some also claim that toxic mold is being sprayed in chemtrails. Do you know whether this might be true?

Russ Tanner: Well, we have seen some people who have done tests that do show after heavy spraying events that substances, powders or fine substances that are left on vehicles, for example, that have been sent to labs are showing very high mold counts. Even more exotically, there have been found red blood cells.
They appeared to be human red blood cells that have been found in these powders and the rain residues that are left after heavy spray events. Yes, there does seem to be, based on this testing, something distributing mold spores in a highly unnatural quantity.

It’s also interesting to me that since the spraying began, we have not only seen mold incidences in people’s houses absolutely skyrocket but we have seen animal die-off and immune suppression, which have been, so far, at least in part, attributed to mold and fungus outbreaks in their bodies. This is an interesting correlation that we really need to look at.

B.R.:
Some suggest that chemtrails are akin to vaccines from the sky. Do you agree with this and, if so, would you argue that geoengineering is the top health issue of our time?

R.T.: Geoengineering is absolutely the top health issue of our time. It absolutely is a vaccination from the sky, in my opinion, and here’s why: Because I can smell and taste chemtrails, as hundreds of people who have contacted me can.

When the air becomes saturated after a spray event, which is daily, by the way, I have symptoms in my body of extreme inflammation, pain, headaches, fatigue, and all of the things that I’ve mentioned earlier and more begin occurring within seconds, 15 to 30 seconds, after I detect these things in the air, I began to have inflammation and all the other symptoms.

What this tells me is that these particulates, which we already know are extremely small, pass right through the lungs into the bloodstream. That makes them a vaccination from the sky, and that is, in my opinion, why they are the No. 1 health issue of our time.

We have to ask ourselves about those people who are head of this project and have the moral depravity to be spreading poison in these populated areas all over the world. We have to ask ourselves what else they may decide to spray in the future that can go right through our lungs and directly into our bloodstream without our consent.

B.R.:
Some say chemtrails aren’t real because the people behind them would be poisoning themselves. What is your argument against statements such as these?

R.T.: There are air-filtration units that usually costs tens of thousands of dollars that remove extremely small particulates from the air or destroy biological organisms in the air. These air-filtration devices are usually intended for industry or laboratory use, and their costs are out of the reach of the general public.

However, to high-level politicians and high-level industrialists who are likely in charge of this program, these technologies are not out of reach. I don’t think at all that it’s unreasonable to believe that these people have employed protection technologies in their living spaces to protect themselves while they depopulate the rest of the world.

The people who have talked about depopulation historically like Fredrick Henry Osborn has said himself that these programs will most likely need to be conduced under another name than eugenics.
In other words, they will lie to the public, they will hide it from the public and, undoubtedly, they will be protecting themselves while they do it.

B.R.:
What can people do to protect themselves, loved ones, pets, as well as food and water supplies outside?

R.T.: This is a very difficult problem because nobody can protect themselves completely. The reason it’s hard to protect yourself is because the particulates are so small that they get everywhere and pass right through HEPA filtration. They cannot be captured by HEPA filters.

The best precautions we can take are to continuously be chelating these metals out of our bodies and to be promoting a strong immune system and to be doing everything that they can to keep our lymphatic system flowing and really to employ all of the health modalities that you would think that you would want to do in life anyway.

The other thing that I find extremely helpful for me, in fact, nothing helps me more than what I call a wet mask. I came up with this idea when I discovered that taking a shower actually helps clean the air.
I spoke to many people who found that their symptoms went away, at least somewhat, when they were taking a shower. My ability to smell and taste them also showed me that, when there was water present, it did help clean the air.

I use wet washcloths with a few drops of peppermint or eucalyptus oil, put it over my mouth and nose after wringing them quite dry, hold them over my mouth and nose with a $3 painter’s mask from Home Depot, and I can immediately taste and sense and smell that the air is much cleaner after it passes through a wet wash cloth. 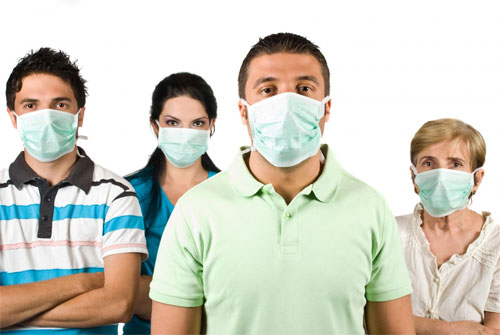 I call this a wet mask, and it’s, I think, one of the best ways people can help themselves. I know it’s inconvenient, but nothing — no single thing — has helped me as much as using a wet mask. Which is also further evidence that these particulates are coming into us from the air.

B.R.:
A lot of people who are enjoying a raw food diet are more sensitive to environmental toxins, and you describe yourself as being chemically sensitive. Can you describe any other measures you take to help minimize the effects of chemtrails?

R.T.: Well, I will tell you the irony for me is that I classically have not been chemically sensitive. Diesel fuel, gasoline, oil solvents — nothing ever bothered me like these metals do. The issue that I’ve had in the past was, ironically, a metal. It was mercury. I did have mercury poisoning from my mouth fillings, which I had removed, and recovered from all my symptoms.

I’ve had a complete recovery. I think that even nonenvironmentally sensitive people are subject because of the very nature that these are small metals that have a different modality of action in the body and can be thought of as being much more toxic than your traditional environmental toxins. I think it is hard to completely protect yourself. I don’t know of any way to do this.

The ultimate solution is that we need to make the public aware that this is happening. Even if you don’t smell it or taste it, there are people around you who do, and they will tell you and will see how people’s health and their mood changes when these metals are thick in the air.

Protecting yourself is very difficult, but by using the things I mentioned such as the wet mask’ chelation, like malic acid is very effective in removing aluminum; increasing your glutathione levels using things like N-acetyl cysteine, a-lipoic acid, Schisandra, which is an herb, and Haritaki, which is an Indian medicinal plants.

These increase glutathione, which is very helpful for moving the toxic metals out of the body. These are the best things we can do aside from getting the exposure to stop. This is going to take raising tremendous awareness in the public eye and waking people up to the fact that this is really happening.

B.R.:
I wasn’t born at the time, but it seems as if the Vietnam peace rallies were the last time an issue galvanized the United States to such a degree over such a long period of time that public opinion helped end the war. In this digital age of awareness but action behind computer screens and cell phone screens but not in the streets, what will it take for people’s voices to be heard and to end geoengineering?

R.T.: I believe we have to start locally. As hard as it is for people to believe and comprehend, there is a tremendous amount of corruption in the federal government. So many senators and governors are complicit with these types of programs.

We have to start with our local governments, make them aware and make our friends and neighbors aware because it’s going to take millions of people, and it’s going to take tremendous political pressure, and it’s going to, ultimately, take changing laws to make the distribution of these types of materials felonies or treasonous, making them openly illegal, to encourage whistle blowers by giving a temporary window of amnesty to pilots so that we can have more whistle blowers come out who can directly attest to this activity.

I believe once a small group of people start coming forth on a regular basis that this will be the crack in the dam that we need to begin the flow of whistle blowers. We need that flow of whistle blowers, and we know that they must exist because there has to be thousands of people involved in the logistics of this operation. I believe that’s what it’s going to take in order to put an end to this.

B.R.:
What resources do you recommend to people to further explore geoengineering?

R.T.: I would recommend that people visit a couple of the best websites on this subject. A leading one is GlobalSkywatch.com. Another tremendous website is GeoengineeringWatch.org. You can also visit our Facebook group, which has over 80,000 members at this time, and it’s growing at a rate of about 1,500 members per week and that’s called Chemtrails Global Skywatch.

Those are the places where I would recommend starting, and those places have links to other resources as well. People can always contact me if they have specific questions and they want to know more about the research that I’ve done personally.

B.R.:
Are there any other points connected to geoengineering you would like to highlight?

R.T.: I would like to say that anytime you want to solve a problem, you have to go to the root of the problem. Otherwise, you’re just putting out fires.
The root of this problem is corruption and complicity in high positions in governments all around the world. We need to unite and bring our representatives in government into a place of accountability for what they are doing.

This is not going to be easy because these people in these high positions are following the orders they are being giving from above, and they know the personal consequences for not following those orders will be very harsh, so they are not inclined to come out and be honest with the public.
We must make the consequences for lying to the public or committing these crimes against the public. Make no mistake, these are horrendous, historic, epic crimes against humanity.

The consequences of performing or being involved with these types of crimes against humanity must become greater than the consequences that these people are feeling from their superiors. Once the public can unite and create an atmosphere where government fears the people, we stand a chance.
The government does need to fear the people, and when it does, then they will began doing the right thing.