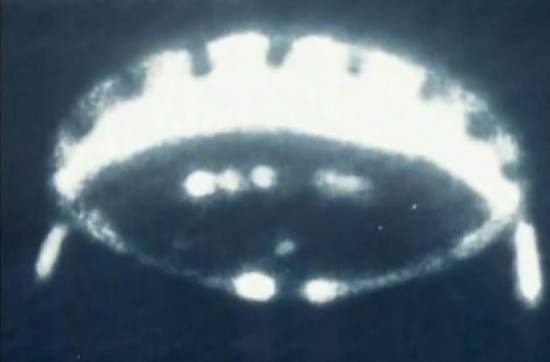 The picture above comes from, according to the lecture below, Apollo 12. Of a craft that was several hundred feet in diameter.

“They published it, and they issued it in the summer of 1964, while I was there working in the war room. They titled it ‘An Assessment: An Evaluation of a Possible Military Threat to Allied Forces in Europe’.
I was working in the war room one early morning. I’m sitting there nodding off, and this American Air Force full Colonel looked at me and he says: ‘Wake up’. He went over to the vault… we kept classified documents in there. The Colonel went over to the vault and pulled out this document and threw it on my desk and he says: ‘Read that, that’ll wake you up’.

Ladies and gentlemen, my life changed. I opened the first page and I couldn’t put it down… I was shocked, I was stunned by the implications of what I read in that study. The study briefly, and I have to briefly lay this out, the study simply concluded this: that the planet Earth and the human race had been under some kind of survey or observation going on for hundreds, if not thousands of years. They concluded in 1964 that there were at least four different groups coming here, observing us, surveilling us, analyzing us, closely watching us – what we were up to, what we were doing. They concluded that there did not appear to be a military threat involved because the repeated demonstrations of incredibly advanced technology proved to us that if they had been hostile or malevolent, there was absolutely nothing we could do. If they were evil in their intent and they were hostile toward us, it would have been over a long time ago.”

Above is an excerpt of a lecture given by Robert (Bob) Dean, a retired US Army Command Sergeant Major who served for 28 years. In the lecture below, he provides a wealth of mind-transforming information that corroborates with what many other whistleblowers have shared.
The lecture was given in July 2009 at the European Exopolitics Summit, which took place in Barcelona and was filmed by Project Camelot.

Dean is one of hundreds, if not thousands, of people with verified credentials coming forward to share what they have experienced during their military careers. With regards to the statement above, former Canadian Defence Minister Paul Hellyer has also mentioned the same report that Dean refers to, stating in an interview with RT news that “they decided to do an investigation, and they investigated for three years, and they decided, with absolute certainty, that four species, four different species, at least, have been visiting this plant for thousands of years.” He also mentions “there’s been a lot more activity in the last few decades, since we invented the atomic bomb.”

“Yes there have been crashed craft, and bodies recovered. We are not alone in the universe, they have been coming here for a long time. I happen to be privileged enough to be in on the fact that we have been visited on this planet, and the UFO phenomenon is real”, said Apollo 14 astronaut Dr. Edgar Mitchell.

The fact that hundreds of such people, many of whom hold high-ranking positions, have been speaking up about this topic for decades is fascinating. It’s pretty hard to believe that so many people with verified credentials would all lie about something that could so easily damage their careers.
Although there is no definitive way to prove to the mainstream world that ETs are real, we now have hundreds of thousands of documents from multiple countries putting to rest the question “Do UFOs exist?” We know they do, from these documents, which show objects are tracked on radar, spotted by the pilots sent to intercept, and in some cases, simultaneously tracked on ground radar. 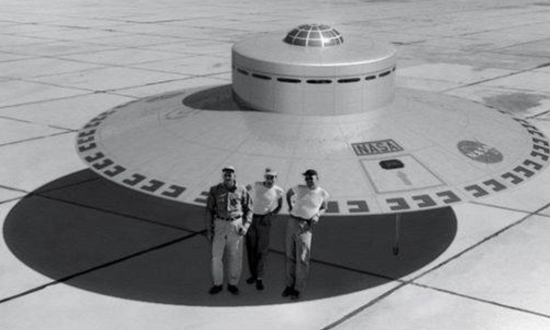 Information like this, particularly the fact that agencies are working to uncover the truth, shouldn’t really come as a surprise. The CIA has a long history of putting resources toward studying this phenomenon, in fact, as well as investigating what other countries know about it as well. For example, another unclassified document outlines:
“Scientists of the People’s Republic of China and the Soviet Far East have begun joint study of UFOs. The first meeting of ufologists of the two countries has ended in the small maritime townlet of Dalnegorsk. The Soviet and Chinese specialists on anomalous phenomena have mapped out a program for investigating incidents that are already known and have also arranged to directly exchange video and photographic materials on new similar phenomena. Dalnegorsk has not been chosen by chance as the place for such acquaintance. In the last few years the number of cases of visual observation of UFO’s has noticeably increased there. In just the last four years alone no less than 10 UFO’s have been recorded. Specialists link their heightened interest in places here with the variety and wealth of useful minerals in Maritime Kray. Similar, incidents have also occurred in mountainous regions in China whose climatic conditions and natural landscape resemble our own.”

In many cases, these testimonies are given by the people involved in the incident, the military personnel mentioned in the actual files.

Dean also had some choice words for NASA:
“Ladies and gentlemen, my government, NASA, which many of us in the United States say stands for ‘Never A Straight Answer’, proceeded to erase 40 rolls of film of the Apollo Program – the flight to the Moon, the flight around the Moon, the landings on the Moon, the walking guys here and there. They erased 40 rolls of film of those events. Now we’re talking about several thousand individual frames that were taken that the so-called authorities determined that you did not have a right to see. Oh, they were ‘disruptive’, ‘socially unacceptable’, ‘politically unacceptable’. I’ve become furious. I’m a retired Command Sergeant Major. I was never famous for having a lot of patience.”

Who’s Really in Control of Space?

“This thing has gotten so highly-classified… it is just impossible to get anything on it. I have no idea who controls the flow of need-to-know because, frankly, I was told in such an emphatic way that it was none of my business that I’ve never tried to make it to be my business since. I have been interested in this subject for a long time and I do know that whatever the Air Force has on the subject is going to remain highly classified” said Senator Barry Goldwater, Chairman of the Senate Intelligence Committee.

According to Herman Oberth, one of the founding fathers of rocketry and astronautics, “flying saucers are real and… they are space ships from another solar system. I think that they possibly are manned by intelligent observers who are members of a race that may have been investigating our Earth for centuries.”

If all of this information is true, it’s quite clear that “Never A Straight Answer” is indeed an appropriate name for NASA. The United States has a history of government agencies existing in secret for years. The National Security Agency (NSA) was founded in 1952, but its existence was hidden until the mid-1960s. The National Reconnaissance Office, too, was founded in 1960, but remained completely secret for 30 years.