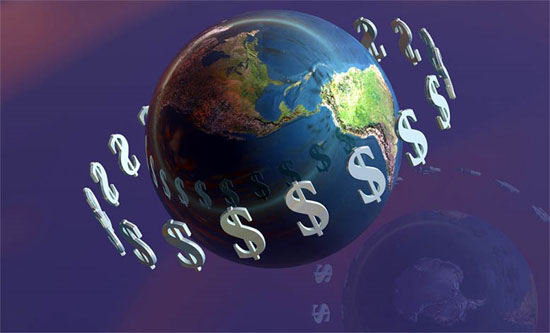 One of the more revealing concepts Dr. Herndon mentions in his article is something not many are willing to acknowledge as the cause of much grief affecting humans and the environment: “During the past 38 years, the standards of scientific inquiry have changed, particularly among those who depend upon government support. Logic-based challenges to current thinking have largely been replaced by consensus conformity.”

Sciences specifically affected by “consensus conformity” include, among others, the health sciences, especially vaccinology, or the science of vaccines – more like pseudoscience – and microwave science, which lags behind from the World War II era in recognizing only thermal waves but not health-damaging non-thermal radiation waves.

Dr Herndon goes on to elaborate on “consensus conformity” as follows: “But science is a logical process, not a democratic process. The idea that large, complex problems are resolved by something called ‘scientific consensus’ has the consequence of misleading not only the public, but members of the scientific community as well.”

As Dr Herndon states: “The oceans are our planet’s major reservoir for CO2.” Big question here: how will they ever collect carbon taxes from the oceans? Or from humans, who exhale it with every outbreath? Isn’t that quite an insurmountable problem? Or will they impose human CO2 taxes for our polluting the planet just by living and breathing on what cabal controllers think is their scientific playground?
However, in Dr. Herndon’s paper we find questions which need answering – and very soon:

– As National Oceanic and Atmospheric Administration (NOAA) and NASA are both prime sources of data utilized in climate models and assessments, and are apparently participants in the global covert tropospheric geoengineering activity, how objective are their data?

– Indeed, what are the purposes of spraying a toxic substance into the air we breathe on a near-daily, near-global basis? Surely, those closely connected with the operation know that it causes global warming and polar ice melting.

– Do government leaders realize that the intent of these covert geoengineering efforts is to cause global warming? Or are leaders being deceived, told that the tropospheric aerosol spraying is to prevent global warming?

– Is it being done to get at the petroleum and other natural resources beneath polar ice?

– Is tropospheric geoengineering being done to cause global warming so as to provide a basis for the United Nations to take control of major elements of sovereign nations’ economies? Or are more sinister motives involved?

– The military has researched weaponizing weather since 1947, but at what cost to human and environmental health? What have leaders been told that makes them acquiesce to a program that is no less than an assault on planet Earth?

– Who profits from this?

– Why are scientists promoting the idea of future geoengineering when they know, or certainly ought to know, that tropospheric geoengineering has been ongoing nearly worldwide for decades?” 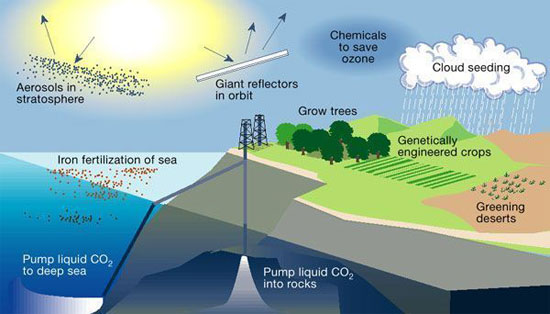 Nevertheless, the scientific “nitty-gritty” aspects of Dr. Herndon’s paper can be found in his discussion of Covert geoengineering contribution to global warming. Here’s what he says in part:

“Geoengineering is defined here as deliberate, large-scale activities aimed at modifying weather/climate systems (i.e., from the troposphere to the stratosphere to the ionosphere – all natural systems). Weather modification programs have been employed by many nations at least since the 1960s, that is for over half a century, typically for agricultural purposes.
[…]
There has not only been great secrecy involved, but governments have deceived citizens, either denying the aerial activity or falsely asserting that the observed aerial trails are simply contrails, ice crystals formed from water vapor in jet exhaust. In 2005 the United States Air Force distributed to government agencies and published online a document entitled Contrails Facts which blatantly denied the existence of the observed particulate trails and falsely asserted that they are contrails.
[…]
There is good evidence that the main particulate matter being sprayed into the troposphere worldwide is coal fly ash, the light ash from coal combustion by electric power companies that is considered to be too toxic to be allowed to exit smokestacks in Western nations.
[…]
In the midst of official denial and misrepresentation, one can deduce from physical effects the purposes, if not the motives, for the near-daily, near-global coal fly ash tropospheric geoengineering. Aerosolized coal fly ash retards the fall of rain, at least until clouds become so overburdened that they let go with torrential downpours and storms. Coal fly ash makes atmospheric moisture more electrically conducting, which may be useful in military electromagnetic activities. Coal fly ash sprayed into the troposphere heats the atmosphere, and retards heat loss from Earth’s surface thus enhancing global warming. As coal fly ash settles to the ground, its typically dark gray color absorbs sunlight and alters albedo, again enhancing global warming.”

Dr Herndon’s remarks in the above last paragraph certainly are incriminating about global warming being a man-made (anthropogenic) tragedy, along with an experiment all humans are forced to participate in unknowingly, unwillingly and in defiance of the Nuremberg Code.

In the Conclusions of his article, Dr Herndon offers these bone-chilling remarks:
“Tropospheric aerosolized particulates, evidenced as coal fly ash, inhibit rainfall, heat the atmosphere, and enhance global warming. Evidence obtained from an accidental aerial release of an engineered material indicates there is an effort to melt glacial ice and thus enhance global warming. By ignoring ongoing tropospheric geoengineering, the Intergovernmental Panel on Climate Change climate assessments as well as the moral authority of the United Nations are compromised.” 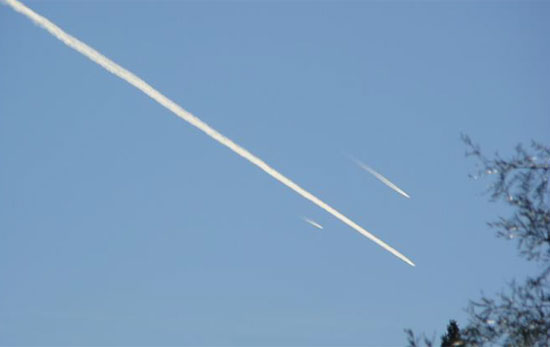 Three aircraft flying simultaneously in the same physical environment in which contrail formation is possible in the air above Tucson, Arizona (USA) in 2011. Note that two display short contrails characteristic of rapid ice evaporation. The lengthy trail across the sky is not a contrail – otherwise it would have evaporated as quickly, and been as short, as the other two. Rather, the long trail is formed by emplaced particulate matter.

Dr. Herndon’s latest paper is written in scientific language. However, we encourage you to read it, as it explains much of what needs to be understood about how not only weather is being manipulated, but science, the environment and humans, as a result of clandestine mechanisms. Hopefully, more humans will be interested enough to oppose what’s happening to us and our beloved planet.
Many people already thank Dr. Herndon, for his unfailing scientific efforts.