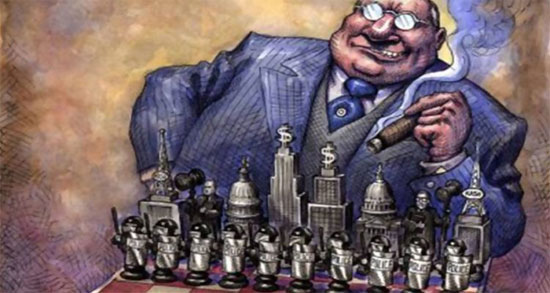 Following the money is always the key and crucial element to determining the probable cause / modus operandi regarding to globalist actions. Although there are many who believe that President Trump is the panacea to all problems, even they may perhaps admit that there are forces other than the US President that drive America, as well as the world. The shadowy cabal of globalists, Bilderbergers, bankers, and other secretive organizations bent on a union of totalitarian control are almost too numerous to count.

There are many things the President does not know. This is intentional on the part of the moneyed interests that control the very fabric of our society. The interests are corporate, political, and religious: a three-level tier of control over all the facets of human society. Just as one individual person cannot dominate one of these sectors, the sectors themselves cannot dominate. They are forced into a symbiotic relationship rooted in commensalism, where each of these parasites benefits the other two.

The problem lies in the fact that these interests are elitists who believe in the forced imposition of their philosophies upon the masses. They also believe in “culling the herd” and maintaining a servile population at minimum levels to carry out all menial labor and industrial production (the Deltas and Epsilons of Huxley’s Brave New World) as they direct. Patiently these elitists have been waiting the day when their 1984 society is a reality, crafting and shaping it all along throughout the decades.

The numbers of humanity pose a problem, because they cannot effectively eradicate all necessary without a large-scale plague or a war, and after such an event, the planet itself might be unsustainable.

The key question for them: how to kill off about 6 to 6½ billion people without destroying the world?

The most efficient way would be with a limited nuclear war that destroyed enough key targets to minimize postwar effectiveness of the major powers, in a manner that does not irradiate most of the warring nations. The key to the entire equation is to take down the United States. The EMP (Electromagnetic Pulse) is the weapon of choice. This would paralyze all the infrastructure, leading to (as so eloquently outlined in the book One Second After) mass die-offs and the reduction of populations to pre-industrial societies.

The shielded and stocked communities of the elite could just sit back and allow the populations to destroy themselves and whittle down the numbers. After a time (most likely already estimated and predetermined), mercenary forces of the elitists, could emerge to mop up the remnant, enslaving and subjugating them completely.

The question isn’t whether this is in the works: it is. The elite have been following such plans as revealed in the Iron Mountain Report, and the moneyed interests have been crafting their plans long before House wrote Philip Dru, Administrator, as he and Wilson created the Federal Reserve and laid the roots for the cancer that is pervasive and underlying the thin veneer of our phony, Hallmark-Card society.

The numerous articles about the millionaires and billionaires forming “intentional communities” and compounds/complexes for the purpose of surviving an apocalyptic event/societal collapse are not inaccurate. The widespread reports of tunnel complexes, nonstop truck deliveries, and the diversion of taxpayer-funded government resources to secret locations throughout the United States are not inaccurate. Jesse Ventura was investigating many of these matters before the moneyed interests put a stop to his actions and he retired from the field without fanfare. Everyone who has exposed or threatened to expose them has either been marginalized or destroyed. Just as people search for the one hero, they are also easily manipulated to focus upon one villain, such as a Kim Jong-Un, or a Bashar al-Assad. Substitute the name Emmanuel Goldstein for either of them before the Two-Minutes Hate is conducted.

Fast forward to now. The bottom line is that when different factors come together “coincidentally”, the probability for action by the elites and the point of no return is increased exponentially.

They haven’t ushered in their era yet; they will not until they’re certain they can pull it off, but they will eventually make a play for it.

These power-brokers will not commit themselves in the gamble unless they’re sure of a win. For this reason, it is important to monitor the hot spots for those convergent points to know when something is likely to occur: when the possibility exists, and the probability increases. One of those points of convergence is in this period of time. 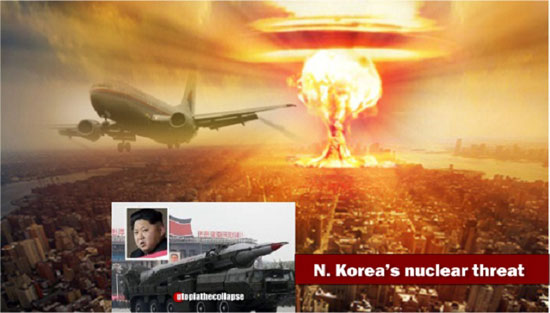 On September 3, (2017), North Korea did its sixth nuclear devices test. However, the test was initially announced to take place in the end of April. Coincidentally, there was a power outage in three different U.S. cities: San Francisco, Los Angeles, and New York City on April 20. Coincidentally, the US drill named Operation Gotham Shield (governmental authorities simulated a nuclear attack on Manhattan) took place in the same time, on April 24-27. Coincidentally, in that period Russian bomber and intelligence-gathering aircraft have been flying test runs along the coast of Alaska, for four days straight with the U.S. and even Canada scrambling fighters to intercept. Coincidentally, the Russians claim to have electronic devices with an electromagnetic pulse-type effect, already used against the USS Donald Cook, a guided missile destroyer with Tomahawk missiles back in November of 2014. Coincidentally, the U.S. naval armada arrived in the waters off the Korean coast on April 26th… right in line with the electromagnetic pulse drill Operation Gotham Shield.

All these factors point toward training and planning for a false flag pretty soon. If the opportunity to pull such a false flag off arises, they will seize upon it. Trolls without number try to disparage this concept… the “nothing has happened yet, therefore nothing will happen” crowd. The ones who are so certain that all of this is just “fear speculations” or a “sham” of some kind. Don’t pay their nonproductive and perhaps remunerated redundancies any mind. The whole point is to be aware of what is going on and pursue to survive it.

Be that “tenth man” as outlined in the film World War Z, and consider what the herd has been conditioned not to consider, and it might improve your chances to survive what is coming: what the elites have planned and will trigger with a false flag. “No matter how improbable it may seem, the tenth man has to start thinking with the assumption that the other nine are wrong.”