David and Goliath 2018: How One Man Accelerated the Collapse of the British American Empire (2) 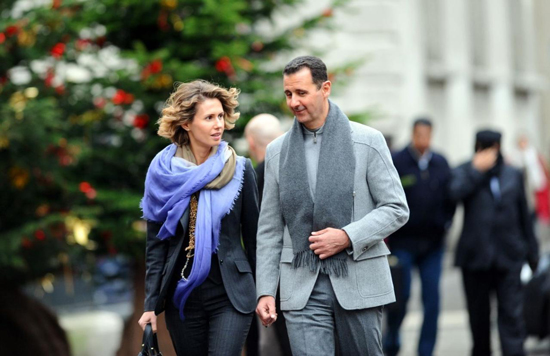 What’s not conveyed in the preceding account is the reality that many people are currently pulling for President Assad and his people. As a result, Assad is the recipient of large support. The moral support from his own people has impelled him forward in ways that could not have happened otherwise.
Friends such as Putin’s Russia and Khamenei’s Iran have brought the necessary military capability to fight to destroy the ISIS terror network that was created by NATO’s biggest military members (U.S., U.K. and France), as well as by Israel and Saudi Arabia. These same aggressor nations have predictably worked very hard to destroy Russia and Iran.

Back to Assad’s secret: he is the people’s president. He wields power for the sake of the Syrian people much like Muammar Gaddafi did in Libya.

Another major reason why Assad is relentlessly castigated by the mainstream media is because he dares to tell the truth.
The clandestine forces behind the Greater Israel project detest nothing more than raw truth like this getting to the ears of the people.
When it comes to addressing mainstream media reporters, Assad is unusually candid in his responses to their cynical questions. Take for example this interview.

Assad’s assessments of President Trump have been especially incisive and revealing. Speaking truth to power in this manner has only brought the wrath of the American Deep State upon him.

There is, of course, a much more secret back story to the genocide that was perpetrated against the Syrian Christian communities by ISIL. That the recent “Syrian Planned Exodus” duplicated the original Armenian genocide carried out 100 years ago in the same geographic area is no accident of fate. In point of fact, the same Zionist perpetrators set it up this way so successful was their first genocide of the indigenous Christian peoples. 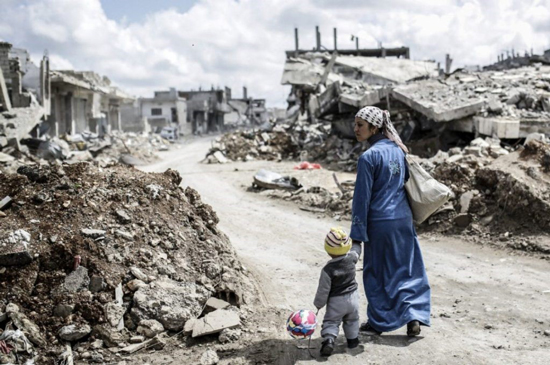 Assad is well aware that his country enjoys a Mideast location that is coveted by other nations around the world, not just Israel. Damascus is considered to be the oldest continuously inhabited city in the world. This distinction resulted from its location at the crossroads of the main trade routes between the East and the West.
Furthermore, Syria lies in the middle of an area with substantial oil and gas reserves. It also lies in the path of prospective oil and gas pipelines. The Mediterranean seabed off its west coast also has extensive proven energy deposits which are likewise coveted. There are other natural resources and geographic advantages for which Syria is envied by its enemies. When all of these are considered in the aggregate, it’s a wonder the NATO military powers did not attempt to conquer Syria decades ago.

What’s quite telling is that Turkey was the primary sponsor of the Armenian genocide a century ago. Erdoğan’s Turkey has again played a key role is every aspect of the present Syrian genocide. The Turkish government was acting on behalf of Western oil companies in 1915 just as the Obama administration was when Hillary Clinton’s State Department executed the regional black operation known the Arab Spring.

Assad is well aware of Syria’s serious location problem. The stealing of the Golan Heights during the Six-Day War in 1967 underscored just how determined Israel was in expanding its borders according to the designs of the once highly secret Greater Israel project.
Assad is also cognizant of the fact that Israel controls the Trump administration and U.S. Congress. He has seen a war cabinet quite stealthily put into place since Trump’s Inauguration Day. Toward that end, Assad has watched all the peacemakers expelled from the West Wing only to be replaced by Neocon Zionist warmongers.

Assad listens to Nikki Haley speeches aimed directly at him every time she snatches the microphone at the United Nations. He watches warmonger John Bolton take over as NSA from H.R. McMaster. Then Neocon warhawk Mike Pompeo replaced the conciliatory Rex Tillerson at State while “Torture Queen” Gina Haspel took over the C.I.A. 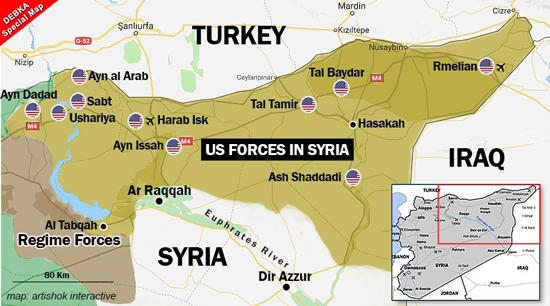 Furthermore, Bashar al Assad hears war criminal Benjamin Netanyahu lie through his teeth about Syria (and Iran) just before every airstrike or missile attack Israel launches against his nation. Meanwhile, the U.S. military occupies the oil-rich northeast quadrant of Syrian territory (see map above) in spite of being viewed as an arch-enemy. Trump permits this illegal occupation despite his many promises to make peace and withdraw from the Northern Levant theater of war.

It ought to be crystal clear by now that Assad, along with President Putin, have the patience of Job. Assad’s fortitude in the face of constant invasions by the Zio-Franco-Anglo-American Axis have helped transform him into a very popular president.
He has been accused of war crimes that were committed by his enemies. He stood up to the British American Empire against all odds and has so far triumphed. The global bullies (e.g. US, UK, France, and Israel) only prey on the weak and small, the powerless and defenseless.

The best kept secret about Bashar al-Assad is that he acts much more like an Alawi believer.
For generations, Assad’s highly respected family has belonged to the Alawite faith tradition which is a “syncretic sect of the Twelver branch of Shia Islam, primarily centered in Syria”. Although Alawites identify as Shiite Muslims, they have beliefs and practice traditions that are borrowed from the Sunni, Christian, Gnostic and Sufi religions.

So what we see in Syria is a Shiite president, whose wife was raised Sunni, and a populace that is a mix of every religious faith under the sun – literally. Before the unlawful invasion by the NATO-backed ISIS terrorist groups, the various religious communities enjoyed excellent relations. This is why Assad and his father Hafez al-Assad were so respected and loved by their people. They brought peace to the land. The successive Syrian governments since 1970 sought to foster an environment marked by religious tolerance and genuine brotherhood. 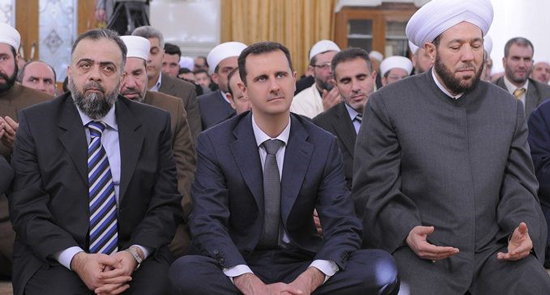 What the entire planetary civilization is now witnessing in Syria is the final battle of the “Era of Empire”. No other war of the modern era has seen such a graphic depiction of good versus evil. A king of a small nation has been forced to stand against the arrogant emperor of a mighty empire just as David against Goliath (on roughly the same Middle Eastern battlefield). Lest the bystander underestimate what’s really at stake there, all should be aware that the world community of nations is but a single false flag attack away from the hot phase of World War III. Therefore, as the U.S. Navy continues to assemble warships in the eastern Mediterranean, extreme and uninterrupted vigilance has never been so imperative.

It ought to be abundantly clear why the Zionist warmongers are attacking Syria with a vengeance.
The Neocon Zionists are determined to implement their regime change. They are obsessed with replacing a popular leader with a U.S.-installed puppet who will allow the Zionists to steal the oil and gas.

Where this will all lead to is anyone’s guess. The many references to Armageddon are both apropos and timely. Large swaths of the Northern Levant have already been transformed into a dystopian, post apocalyptic wasteland.

Perhaps Presidents Assad and Putin along with Ayatollah Ali Khamenei will avert the Armageddon long planned by Zionists.

Some people may still wonder “how one man’s courage triggered the collapse of the British American Empire”.
Because Assad has held firm since 2011, a lot has been exposed about the ways of Zionist warmongering.
The whole world now knows that Al-Qaeda was an American creation. And that ISIS and the Al-Nusra Front were formed, funded and armed by the Western powers. The people also know that ISIL was supported by NATO, and especially assisted by Turkey, Israel and Saudi Arabia. That the Islamic State was furtively established by the CIA, MI6, DGSE, GID and MOSSAD with the blessing of the Obama administration.

For over 7 years these irrefutable facts have leaked out into the public domain. Radioactive truths about the Greater Israel project have likewise gone viral on the Internet. So have volumes of classified information about Operation Gladio A, B and C. Many people know that most terrorist attacks in the Mideast (and everywhere else) are really a false flag operation conducted under the rubric of Operation Gladio.

The real Axis of Evil has been exposed. And it’s not Iran, Iraq, Syria or North Korea. It’s the United States, United Kingdom, France, Saudi Arabia and Israel.
Given these highly consequential disclosures, the Great Game is over. The West has lost. The reign of the Almighty Dollar has ended. The BRICS-aligned nations are ever-so-deliberately leaving the Anglo-American reservation. Once this transition is complete, the Global Economic and Financial System will be re-established and disassociated from the hegemonic British American Empire.