Dirt, germs, exercise, sunshine and fresh air: Outdoors is an adventure for kids that leads to a lifetime of good health

If you think that keeping children locked up inside the home is enough to help them avoid facing deadly diseases or suffering from life-long conditions, think again. There may be some truth to the concept that keeping little ones locked inside can be helpful, but the consensus among a growing number of researchers is that it would be even more helpful to let them simply play outside. 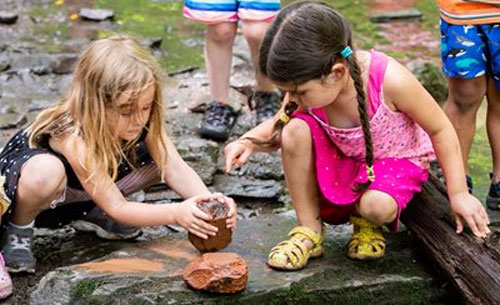 The primary reason is that by playing outside, they would be exposing themselves to more than just sunshine and fresh air: Outside is where they will run into all kinds of dirt, with large amounts of germs and bacteria. Both of which are necessary to the improvement of their health.

While that may seem like a sort of twisted joke that will never make sense no matter how you look at it, some experts are claiming that it’s the truth. Your body, whether you like it or not, is filled with millions upon millions of independent and co-dependent microorganisms. Many of these are germs and bacteria, which have taken up residence inside your body and have set up their own little ecosystem, called a microbiome. A little bit of one kind and less of another will result in possibly catastrophic changes to your health. And all of this is doubly true for children.

According to a recent study conducted by researchers who were working with two children’s hospitals in Pennsylvania and Ohio, the act of cultivating healthy gut bacteria in newborn mice led to the strengthening of their ability to fight off pneumonia. And they have concluded that the exact same can be and is true for humans. And that’s not something hard to believe. After all, experts have long known that a baby’s microbiome plays a huge role in that baby’s health and immunity, from a young age all the way to adulthood.

So all of those bacteria, fungi, and viruses that are living inside you can indeed be helpful. And that’s why it’s important to do your best to cultivate them while you’re still young. That’s basically what the researchers are pushing for, but for children.

You see, the process of improving a child’s microbiome begins immediately after birth. While inside the womb, a baby has virtually no microbes yet. But as soon as they leave the womb and get born, they become exposed to different kinds of microbes. Many of these will end up training the baby and its immune system and eventually help it avoid infections and diseases later in life.

The idea is that a healthier microbiome can only be possible with ample exposure time to bacteria and germs. Children who are not allowed to grow their internal microbiome tend to suffer from a whole host of diseases and conditions, such as diarrhea, obesity, anxiety, and even allergies. These are just some of the things that tend to affect babies and young children.

Fortunately, there’s a relatively easy fix: Simply by letting children play outside, they will be able to enjoy greatly improved immune health. Not to mention, spending time outside and surrounded by friends or other people who know them will help in reducing stress levels in children, which then leads to intestinal bacteria flourishing.

The researchers have also noted in their study that apart from playing outside and being exposed to germs and bacteria through dirt, it can also be helpful to get a puppy, which will be the main source of bacteria and germs both inside and outside the home. Though invisible, microbes may just be an important element of a child’s health from a young age to adulthood.

The magic of sage