Electronic Money under The One World Order (OWO): Are We Becoming Western Money Slaves? 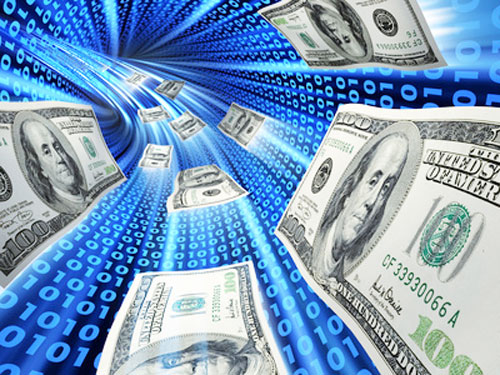 Why reduced to the Occident? Because the Orient, China, Russia and the other countries belonging to the Shanghai Cooperation Organization (SCO) and to the Eurasia Economic Union (EEU) have already largely delinked themselves from the western dollar-based system of fraud. They are saved from slavery.

This reminds of one of the oldest and world’s worst criminal agent against humanity – still alive and kicking – Henry Kissinger: “Who controls food, controls the people; who controls energy controls entire continents; and who controls money controls the world.”
He is, of course, right on all fronts, and has given us this clue already more than 40 years ago. But few have really seriously taken it to heart and acted upon these edicts.

De-globalization would be a first step towards freeing us all from the bloody claws of the Washington implemented, and Dark State directed NWO.
Critics often talk of an overhaul and reform of the system. This monetary system cannot be reformed. It is privately owned and rotten to the core. None of the private owners, the Rothschild, Rockefeller clans et al, would allow interfering with their wealth, usurped of the back of the world’s workers and populace at large. Former attempts (e.g. under JFK) to bring the FED (Federal Reserve) under national reign, have resulted in failure.

Compare the dollar-based monetary system to the European Union – which cannot be reformed either. Any reform is just fiddling at the margins – as is inherent in the term “reform”. And that’s not good enough. As we know by now, the EU was not the construct of Europeans per se, but an idea behind the deep state, already at the onset of Phase II of the Great War (WWII – September 1939 to September 1945). Phase I (WWI – 1914 – 1918), as well as Phase II were induced to weaken Europe, to make her ready for full domination.

Imagine a Picador of a Spanish bullfight, whose job it is to weaken the bull to the point where the torero and matador have a relatively easy task subduing and killing the bull. Well, Europe is the bull. They don’t want to kill Europe altogether, good old Lady Europe, because they need her as a stepping stone for subjugating the rest of the world, for vital trade that helps justifying and generating the unlimited dollar machine – and, as a cushion to the East, where massive military troops and weapons can be stationed in the name of NATO, to eventually launch, what they would like to think, is the final blow on the East, starting with Russia.

For all this the European (non)-Union was created, her Brussels hub, dominated by the non-elected European Commission (EC) which also dictates most of the rules imposed on her 28-member states – and which are all not-so-coincidentally run by neoliberal, some close to neofascist governments. Of course, by adhering to the Brussels dictate, they have become devoid of national sovereignty. That is a must. A sovereign country would not submit to the horrors of police state and militarization that are in the coming. The euro with the Wall Street (Goldman Sachs – GS) run European Central Bank (ECB) is just a logical add-on to the fake EU. By now, many serious scholars have concluded that neither the EU nor the euro are sustainable, but are doomed to collapse sooner or later.

The EU and the euro are a complex construct, largely manipulated and carried forward by the Dark State’s main secret services, CIA, NSA, Mossad, MI6 with close collaboration of Europe’s national secret services. Hence, the creation of a complete political and monetary vassal, the European Union and her currency, equally fraudulent as its master currency, the US-dollar.

It is not by chance that today’s western US-dollar based monetary system, with its center, the Federal Reserve (FED), has been created just at the onset of Phase I – WWI. In 1910, Rhode Island Senator, Nelson Aldrich, with his heart close to the world of bankers, organized a “hunting trip” for five top Wall Street (WS) bankers to travel in disguise by train to Jekyll Island, off the coast of Georgia, where they concocted in a few days the concept of the modern FED – which was to become the “mother” of the new dollar-based world monetary system, now reduced to the western monetary system. The Federal Reserve Act was signed into law in December 1913 by President Woodrow Wilson.

On his death bed, in 1924 Wilson apparently declared: “I am a most unhappy man. I have unwittingly ruined my country. A great industrial nation is controlled by its system of credit. Our system of credit is concentrated. The growth of the nation, therefore, and all our activities are in the hands of a few men. We have come to be one of the worst ruled, one of the most completely controlled and dominated Governments in the civilized world no longer a Government by free opinion, no longer a Government by conviction and the vote of the majority, but a Government by the opinion and duress of a small group of dominant men.”

The FED, the Bank for International Settlements (BIS – also called the central bank of all central banks, manipulating gold prices and currency exchanges), as well as the related dollar-machine are totally privately owned. On top of the owner pyramid are the Rothschild and Rockefeller clans, et al. Henceforth, all international monetary transactions had to transit through a WS bank, be it in New York or London. This is the only reason why the US government, i.e. Washington and its dark handlers, are able to hand out economic and financial sanctions as they please, to control those, who do not want to bend to their dictate.

Sanctions in terms of blocking trade with a Washington-destined country and punishing everyone who does not observe the sanctions, plus confiscating a country’s foreign assets are totally illegal before any international court. But there is no international court that is not bought by this sham monetary system. By the same token, this same deceitful banking-monetary scheme induced the last artificial economic crisis 2007/2008 – and counting, allowing Wall Street to launch a worldwide globalization of banking which de facto, puts worldwide private banking under the oppressive wings of the FED and WS. This, all the more as the World Trade Organization (WTO) a few years earlier made banking deregulation mandatory for any new WTO wannabe member.

How to get out of this slavery before we are totally locked into a system from where to escape may be nearly impossible? The solution sounds simple enough in theory, but of course is much more complex, as it confronts politics, which is controlled by the dark deep state of the NWO, or the One World Order which more appropriately describes what we are faced with.
Nations and societies that want to get out of the killer-claws of those who control the NWO, have to start thinking out of the matrix: de-globalization and de-dollarization.

The first step is thinking in a new paradigm. Greece would have had an excellent opportunity to show the world how to become free of those abusive financial vultures, and regain her sovereignty. Hélas, Greece didn’t. She may have not been allowed to do so. A huge dark killer sledgehammer was and still is hanging over the country. 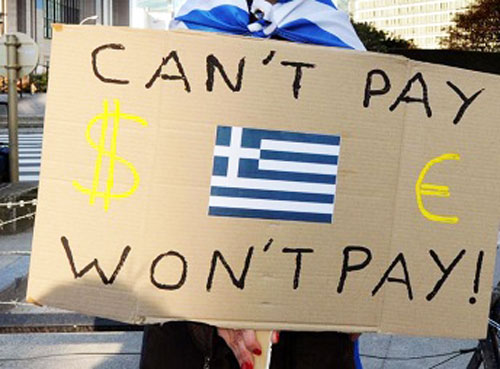 “Local production, for local markets, with local money, and local public banking for the promotion of the local economy” is the name of the simple game.
Beyond this approach, trading between regional friends, culturally similar countries, think-alike peoples’ nations, respecting each other’s comparative advantages, would be a normal next step. Trading would become again what the original meaning of the word says: an exchange of goods among equals, where, contrary to the current system, each trading partner is a winner. A good example, still in its infant steps, but progressing, is ALBA (Spanish acronym for Bolivarian Alliance for the People of Our America; “alba” also means appropriately “dawn” in Spanish). This alliance was launched by Venezuela and Cuba and today comprises some 11 Latin American countries, including Bolivia, Ecuador, Nicaragua and a number of small Caribbean nations.

The concept of ALBA could be replicated in many parts of the world. ALBA in many ways is a modern barter system which uses a virtual currency, the Sucre. The currency’s value is the weighted average of each member country’s economic output plus the US-dollar. Why the US dollar? One of the member countries’ Minister of Finance told that keeping the dollar in would help avoid a massive boycott of the nascent system by Washington. We can only hope he is right. ALBA needs to gain more strength and new members.

Only half a century ago, this type of trading within neighbors was common, and it was fine. It was certainly more equal than today’s WTO-led and globalized trading system, where the small – i.e. developing countries – always lose out, for the benefit of the domineering west. The US-creation of the expression “win-win situation” is certainly correct for any trade between a western industrialized country and a developing country following the rules of WTO. The “win-winner” is always the west. And yet, most developing countries are eager to join the club, lest, they fear, they may become isolated trade-wise. There are alternatives à la ALBA. Unfortunately, many of their leaders are buyable.

Stepping forward into the old system, may be unthinkable for today’s generation, as they have not known – and have been brainwashed to think that “Globalization is the best”.
With GREXT, local money and a new public banking system – detached from Wall Street and European BCE-linked banks, Greece would have been already on a fast-track to recovery, regaining their strength as a sovereign proud economy, whose philosophers have, after all, offered the world the concept of democracy some 2,500 years ago.

Local public banking is key. Just look at the Bank of North Dakota, a state owned public banking institutions which had kept North Dakota out of the 2007/2008 crisis. Except for Ellen Brown, President of the American Public Banking Institute, hardly anybody talks about this success story.
Why? Because it runs counter to what the FED-WS dominated private banking system is doing. This private banking system is NOT working for the people, or for a country’s economy. It is working for private banking profit – and for the wealth of a few – and for eventually dominating the world’s financial system, so as to enslave the population, by totally controlling their financial resources, their livelihood. Case in point is that Germany’s private banks have made a profit of 1.34 billion euros on the Greek misery, admitted by the German Minister of Finance.

That’s the deadlock we have to break. How? With an ever more propaganda and lie-infested media that ever more controls the populace? Imagine the blood-dripping fangs that keep us hostage are not going to loosen their grip, come hell or high water. We, the people, have to break loose, peacefully, non-violently, by thoughtful actions. The de-globalization concept is akin to the concept of Resistance Economy.

We have to promote the concept of Resistance Economy by all means we have available; talking and writing about it to as wide an audience as possible; by having alternative media promoting the idea; and by strongly and firmly always thinking that a drastic change is possible, that darkness doesn’t rule the world – that light can and will shine, if we, the people want it – we eventually may make a difference. What we, the people, are still missing is organization and solidarity. Against the dark state’s constant effort to divide to rule, an initiative in solidarity may move mountains, by steering the vessel from the shade into the sun. All is possible. Never give up.

Seven Sugary Drinks That Are Sabotaging Your Weight Loss Goals