A significant SUPRANATURAL phenomenon! The flower of Buddha blossomed. According to some testimonies, this only occurs once every three thousand years

A delicate and fascinating flower, of which legends of eastern spirituality speak, was discovered in the last 20 years in many places around the world, especially in Asia and American. Considered to be a symbol of divine grace, the orientals see its coming into flower as a divine sign which foretells of the spiritual resurgence of all mankind. 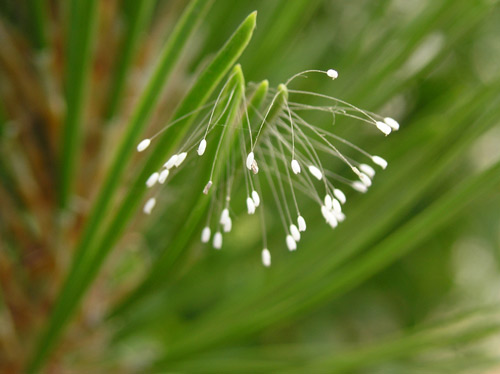 It is said that the last time Udumbara blossomed was three thousand years ago, as an answer to the people’s desire to receive a sign from God regarding the birth of a sage capable of offering them the spiritual knowledge they craved for. Thirty centuries had to pass until Udumbara was seen blossoming once again, in Korea, in 1997. Since then, the coming into blossom of this mysterious flower with a mystical aura was reported to occur in many places around the world: Taiwan, China Hong Kong, Malaysia, Singapore, Australia, California and some other states of the USA.

One of the Buddhist texts say that “The Udumbara flower is a product of supernatural phenomena. It is a heavenly flower which does not belong to this world. When a Holy King who will return the Wheel of the World will return to Earth, this flower will blossom thanks to its great virtues and many blessings..”

The divine signs are meant to awaken people’s souls 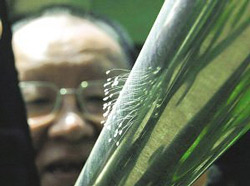 In Sanskrit, udumbara means “a flower of good omen coming from the heavens”.
The delicate flower Udumbara has diaphanous white-pink petals and a soft stem and those who admired its beauty were fascinated by its suave and attractive fragrance, which is surprising for such a small flower. The few photographs – that can be found by those who are curious enough to search the internet – are illustrative of the charm and exciting mystery of its blossoming.

Another amazing fact is its extraordinary resilience. Those who had the opportunity to observe it for a long time could see that Udumbara can resist without going dry for even one year.

The flowers came into blossom in many places, some of them entirely unexpected. The monks in some Asian temples were able to take pleasure in their fascinating occurrence, but Udumbara was also noticed in more prophane places, such as in the display windows of some stores in crowded cities, or on other glass, metal or wood surfaces, capturing the enthusiastic and thrilled eye of the people passing by.

It’s mysterious appearance of the Udumbara flower animated the places where it was seen in a mysterious way, thus confirming the spiritual legend of the divine signs sent to Earth. Many human beings who admired the delicate flower were able to state that they felt like they took on wings and they were much happier.

In spite of the irresistible charm of the delicate flower, there were also a bunch of limited skeptics who were incapable of accepting this amazing phenomenon which surpasses their limited understanding.

Cautious examinations show, without a trace of doubt, that the mysterious Udumbara flower is real 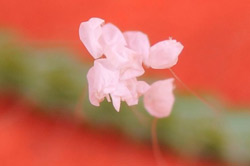 In Communist China, which is well known for its atheistic doctrine imposed by the government, the state media initially published the news about the discovering of the Udumbara flower, surprisingly mentioning its celestial nature. As expected, the news was recalled shortly afterwards, and there were a series of articles published that skillfully said that some superstitious people mistook the eggs of a neuropterous insect for the famous Udumbara flower.

Even though there is a great resemblance between the diaphanous Udumbara flower and the eggs of a certain species of Chrysopidae insects (which can be found on the same type of surface, such as plants, statues, even glass or metal), upon a more cautious research, the differences between the two are obvious. Since both of them are millimetric in dimension, some even subjected them to a microscope exam, thus observing the delicate petals and stamina of the flower, which can not be seen upon observing the eggs.

Plus, the Udumbara flower keeps its freshness and white-pink color for a long time, while the eggs of the neuropterous insect turn from light green to gray pretty fast, as the larva evolves; in a few weeks, the tiny insect will hatch and the egg will become dry shortly.

In spite of the skeptics’ opinion, for whom the Udumbara phenomenon remains controversial, the sublime, legendary virtues of this frail and scented flower have reignited the flame of spiritual hope in the hearts of many pure and open beings who watched the flowers and who were called by the blissful promises that Udumbara brought with it. 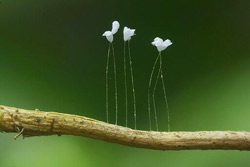 Considering the fact that mankind is currently at the end of the so-called Iron Age, Kali Yuga, which is regarded in the eastern tradition as the age of maximum spiritual decay, the coming into blossom of the Udumbara flower, which is said to bring peace, happiness and enlightening knowledge, might be one of the many divine mysterious signs which foretells the dawn of the new spiritual age of light and truth, Satya Yuga.