Explanatory presentation of the term MERIT

The word merit derives from the Latin term meritum, which in Romanian translation means to get something as part or price which has also the meaning “to be worthy”. The word merit denotes everything that makes a human being worthy of esteem, admiration, consideration. Merit is a central value in the general apprehension of society and power. The merit indicates a spiritual, paranormal or moral value which is recognized at a certain human being who due to his/her accomplishments reached a certain level of inner realization or a certain moral right to gratification, appreciation or praise. Merit is considered to be proportional to the difficulty encountered while accomplishing that transformation and the effort implied by that accomplishment. The merit seems to have a value close to the efforts done by a human being to overpass some difficulties or to surpass the obstacles. In the end of these efforts there is a merit which make that person worthy of esteem, admiration, appreciation.

For example the awakening of one or many paranormal powers (SIDDHIS) in a human being who practised YOGA makes her/him worthy of appreciation due to the special qualities which are worthy of valuation, of praise, of esteem for the other people. For example, in case a YOGI awakened certain paranormal powers (SIDDHIS) we can say about him that he/she has some spiritual merits.

In case that a person awakened and activated certain fundamental virtues we can say about him/her that he/she has certain merits. We can say the same about a human being who is brilliant or reached the state of wisdom. Certain spiritual merits can be felt only by a human being who awakened the same merits in a certain measure. For example, a genius will easily recognize another brilliant human being who has the germs of the state of genius. Concerning a wise man, only another human being who awaken the state of wisdom will be able to recognize this merit (wisdom) appreciating it. In Jesus’ teachings the concept merit comes through when Jesus says: “MANY ARE CALLED BUT FEW CHOSEN”. When he speaks about those “chosen” Jesus invoke indirectly the idea of merit and his words let us understand that doubtlessly the chosen ones would be those who will awaken certain spiritual merits which will allow them to be among the chosen ones. In other words by awakening certain spiritual merits, some human beings will stand out and will appear before the others as being chosen ulterior.

The recognition of the chosen ones will always be done according to the moral, paranormal, spiritual qualities which they will awaken in their inner universe. For example in the Christian tradition, at the beginning, the chosen ones were Jesus’ apostles and even among those some come to the fore as being among the very few and chosen as, for example, the apostle John.

Afterwards, in the Christian tradition the great saints were the chosen ones, in the western spiritual tradition the great sages were and will always be the chosen ones. In the YOGIC tradition the great yogis who reached the highest levels of spiritual evolution in YOGA were and will always be the chosen ones. The concept “chosen” which is connected to the idea of merit invokes the occult paranormal value that some human beings manifest in some degrees. For example a man who already succeeded to awaken the state of VIRA has doubtlessly certain merits, qualities, abilities, talents which are awakened in a great or medium degree comparing to an ordinary man who has all these qualities, talents, merits or abilities still latent. In the case of such a man who did not awaken in other lives certain qualities or paranormal, spiritual talents, these qualities, talents or merits are not even burgeoned, comparing to the other man who already activated his VIRA state. In case that certain merits, talents or spiritual qualities which were already awakened in other lives are gemmating, a spiritual Guide is capable of perceiving, when looking at the picture of that person, the qualities, merits and talents that are already in bud into that human being. Due to the fact that the shape is the mysterious expression of necessity, we can say that both the shape of the body and the expression of face, the global port of that human being, the predominant tone of his/her voice, the mysterious predominant frequency of vibration and even his/her style, each of those aspects and all together represent that human being in his/her integrality, with his/ her merits, qualities and talents he or she comes with from other lives.

In case that some spiritual qualities, talents or merits are already burgeoning, they express themselves or in other words they are reflecting precisely in the shape of the body, in the eyes, in the characteristics of his/her skin, in the tone of the voice, in gesticulation, in the style that the person has. In case of interaction between two people of opposite sex who meet for the first time, they begin to interact in an occult and instantaneous way at different occult levels of their being and subtle reactions, certain energetic states, feelings that often can be affinity, dislike, admiration, attraction, rejection, friendship, love, admiration, etc will appear in their inner universe. The merits of a human being are always personal and they can not be inherited. While love making with continence and transfiguration, the merits of the two lovers can be transferred and multiplied into the inner universe of the other. This way, when a very intelligent man makes love to a woman who is intuitive and sensible, from a superior point of view, through that complementary amorous fusion, both the inner woman and the refined sensibility and intuition, which are the qualities of the woman he loves, will awaken little by little into that man. As about the woman, she will awaken gradually both the interior man and the extraordinary intelligence that the man is manifesting spontaneously. This way, the two lovers are transferring and multiplying in one another certain qualities, exceptional talents and they will have a quick transformation with the help of the other one. The fundamental aim of this process is the awakening of the glorious androgynous state. This occult process of growth and multiplication generated by reciprocal love, transfiguration, consecration and love making with continence presents an extraordinary complexity which cannot be described with words.

A complementary love making in which the two lovers are very alike as merits and value makes their aura grow due to the identification with one another. Generally speaking, the merits that a human being got after transformations are a legitimating criteria of all the advantages that he/she enjoys while interacting with other human beings in a social group. 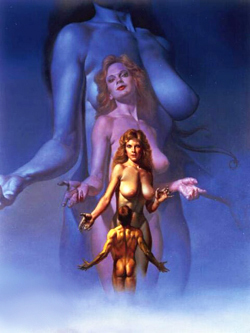 All the merits that a human being awakened are self-founding, in other words, it is out of the question to doubt whether we deserve the merit that other people already discovered about us and they appreciate it. For example, it is out of the question to doubt the geniality of a person who is univocally appreciated by the other people as a genius due to his/her brilliant discoveries. It is the same case with a man who already awaken the state of VIRA and he is appreciated by the other aspirants to the state of VIRA due to the qualities and merits he already awaken into his inner universe. Such a man will be capable to discover easily the merits and qualities that already began to burgeon in a woman who is able to awaken easily her state of Shakti, doing an adequate method she will have to accomplish attentively and perseveringly. In case a woman already awakened the state of Shakti, she will be able to sense easily and even to feel empathically certain merits, paranormal qualities, exceptional talents that some men, who are called to awaken their VIRA state, have in bud. A man who perfectly awakened his state of VIRA is then able to easily awaken and amplify a woman’s state of Shakti who has certain occult merits and some paranormal qualities which are still in bud. Such an accomplishment is still possible only if that man already reached the perfect awakening of the state of VIRA which implies a perfect control over the sexual creative  potential. The human beings who have spiritual paranormal merits make themselves noticed through the manifestation of their merits. The paranormal merits which are manifested at the right time set forth those who already awakened them. No paranormal merit (SIDDHI) will remain hidden when it is manifested. The paranormal merits with which some human beings are endowed can not be considered in case there is no capable human being to discover and appreciate them.

The paranormal merits penetrate easily everywhere.
The sages say: “There is no spiritual merit on Earth greater than the constant concern for the spiritual benefit of the other people.” They also say that during this ephemeral existence there is nothing more appealing than a woman who entirely awakened the state of SHAKTI.“ The paranormal (SIDDHIS) and spiritual merits of the advanced YOGIS fulfil their mission even when those YOGIS are at great distance. In the case of an advanced YOGI, there is no more necessary for him to talk about his extraordinary spiritual merits after many people had their benefit from them and everyone glorifies them. Those who have experience know that the road of spiritual merits is extremely long without some favourable moments. Nature often awakens the merit in a human being and the favourable chances will make him/her act. Our paranormal and spiritual merits attract spontaneously the esteem and admiration of those human beings who appreciate them for their value. People reward the manifestation of merits with admiration and respect.

Read the explanatory presentation of the term HOPE

Explanatory presentation of the term HOPE

Explanatory presentation of the term HOPE