Experimental covid vaccines are causing blood clots in some recipients, and may cause life-threatening medical emergencies in young people who aren’t even at risk from a natural infection. 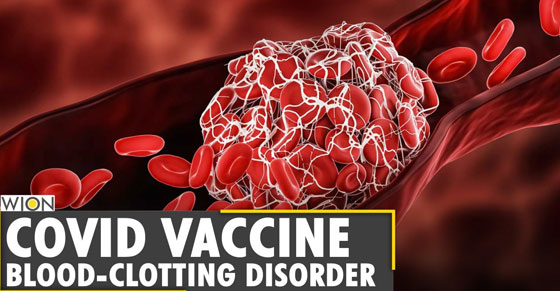 Governments around the world have temporarily paused the emergency rollout for these vaccines, but nothing is being done to fix the problem with this controversial science. German scientists have recently discovered why this type of vaccine causes blood clots to form in some people.

The AstraZeneca and the Johnson & Johnson shots are adenovirus-vector vaccines. This vaccine model uses a modified adenovirus taken from monkeys to carry specific instructions to cells in the human body. After the modified adenovirus is injected into people, it carries unique genetic information from the SARS-CoV-2 virus. This genetic information is relayed to the cells, forcing the cells to produce copies of the inflammatory spike protein – the infectious property of the virus. When this foreign spike protein is produced on the cell’s surface, the immune system is supposed to respond, forcing an antibody response. This process doesn’t work perfectly in every person and may cause an autoimmune attack on the body’s own platelets.

Andreas Greinacher, MD, head of the Institute of Immunology and Transfusion Medicine, University Hospital Greifswald, Germany, was one of the first scientists in the world to discover how these vaccine-induced antibodies attack a key protein in platelets, causing rapid formation of blood clots.

The problem begins with the adenovirus shell and the foreign proteins that were used to cultivate that virus. Once these foreign particles are injected, they may come into contact with platelets from the blood. The body’s platelets may over-react, rushing to the site of injection. These platelets rush in to stop the bleeding and also provide an initial immune response. The platelets will then surround the injected adenovirus shell and any foreign proteins. Once the platelets are activated, they let off chemical signals that are stored up in their granules. The vaccination breaches the normal routes of exposure and can therefore excite an abnormal number of platelets.

This causes a massive release of chemical signals, instructing an abnormal number of B-cells to attack the platelet factor 4 protein, which regulates blood clotting. This allergic flood of B-cells is called into action because the body believes it is under an enormous attack from invading pathogens. The flood of B cells creates antibodies for the platelet factor 4 protein, which helps coordinate blood clotting. The antibodies attack the body’s own platelets, prompting the platelets to recruit white blood cells. “By then the whole reaction is exploding,” said Dr. Greinacher. The inflammatory reaction causes an autoimmune attack on the body’s own platelets, causing blood clots to form.

The German scientists discovered another process that contributes to this life-threatening vaccine injury. These adenovirus-vector vaccines contain a calcium binding agent and stabilizer called EDTA. This additive, essential to the science of the vaccine, is responsible for prying open the junctions between cells that form the walls of blood vessels. As EDTA opens up these junctions, it permits the foreign proteins and platelets to enter the bloodstream. If enough activity is detected in the blood stream, the immune system will overreact, triggering an onrush of autoimmune attacks that precede the blood clots.

Adenovirus-vector vaccines were developed as one-dose protocols because the immune system quickly gains immunity to the adenovirus vector, thwarting the full process. This renders future doses of the vaccine less and less efficacious. These vaccines will not be valuable long term, as new mutations and variants of coronavirus circulate.

Any re-vaccination for coronavirus mutations and variants will not convey the full, intended immune response, leaving people dependent on a faulty science of waning immunity that also includes hyper-inflammatory blood clotting risks and other severe adverse events.