Kaempferia parviflora, also known as Thai ginseng, is a medicinal plant that belongs to the ginger (Zingiberaceae) family. It grows in tropical areas in Asia, such as Malaysia, Sumatra, Borneo and Thailand. 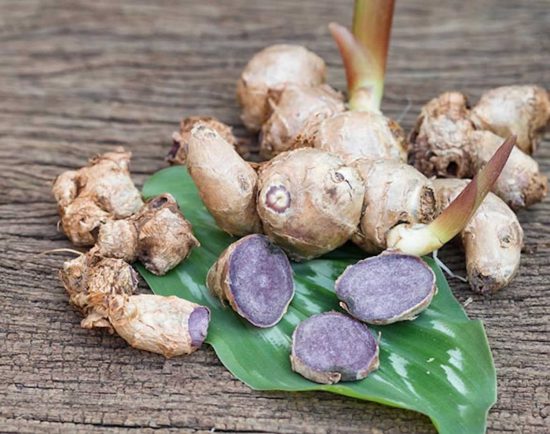 For centuries, traditional healers have been using the root of Thai ginseng to make natural medicines. Hill tribes in Thailand believe that the herb – locally known as krachaidum – can improve physical performance and enhance endurance. Over the years, many studies have discovered several properties of Thai ginseng that make it an excellent medicine for various ailments. These properties include anti-allergenic, anti-inflammatory, antidepressant, antimicrobial, anti-cancer, anti-obesity and cardioprotective activities.

According to chemical analysis, Thai ginseng owes these beneficial properties to bioactive compounds called methoxyflavones. The two primary methoxyflavones in Thai ginseng are 5,7-dimethoxyflavone (chrysin dimethyl ether) and 5,7,4-trimethoxyflavone. The former is said to have antidiabetic, anti-inflammatory and anti-sarcopenic properties, while the latter has shown anti-plasmodial activity against the malarial parasite, Plasmodium falciparum, and antiproliferative activities against human gastric cancer cells.

Thai ginseng as a natural remedy for erectile dysfunction

According to the researchers, sexual health positively correlates with overall well-being. However, current strategies meant to enhance male sexual health – particularly that of older adults – are limited by many factors, such as responsiveness, adherence and adverse effects. Researchers understand the need for safe and effective interventions that could help preserve male sexual function. Hence, they’ve started exploring the potential of medicinal plants that have been used for centuries to improve sexual health.

The researchers reported that 13 of the 14 participants completed the study. Supplementation with the ethanol extract obtained from the root of Thai ginseng induced statistically significant improvements in erectile function, intercourse satisfaction and total scores on the IIEF questionnaire. The Thai ginseng extract was well-tolerated by the participants and exhibited an excellent safety profile.

Based on these findings, the researchers concluded that Thai ginseng can improve erectile function in healthy, middle-aged and older men.