Hitler’s pact with the devil was real

An unique document can be found amongst the specialists studying the mysteries of Adolf Hitler’s fantastic ascension, inexplicable from almost every perspective. 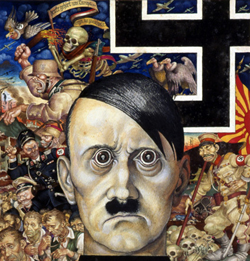 The document, dating from 30th of April 1932, which is considered to be an authentic document, went through several technical expertise processes and it represents a deal that Hitler made with the Devil himself, according to the Russian website Afischa. Written in gothic characters, as it was used to in Germany in those times, the document is signed in blood and the expertise did not infirm neither the age of the blood, nor the fact that it belonged to the former führer.

Remembering the allegorical formula from Faust by Goethe, Hitler committed through this document that he surrendered his soul to Satan in exactly 13 years. In return, the master of darkness, by using satanic paranormal means, was going to secure Hitler with limitless powers on one condition, that they were used in solely malicious purposes.

Dr. Greta Layber, who is specialized in deciphering the ins and outs of the Third Reich, says that she verified the validity of the document from several perspectives and that it is genuine. If the document is indeed genuine and if we accept the existence of certain paranormal phenomena whose explanation we should search for, then this explains the strange fulminating evolution of a mediocre man from all the points of view, a man who has still managed to become the leader of Germany.

Hitler ascension has indeed begun in 1932, the year the document was signed, and for many years in a row, nothing can stand in his path. There were many attempts at his life but all of them have failed, with no exception and Hitler said every time that he is protected by “heavenly providence”.

The peak of the assassination attempts was undoubtedly constituted by the assault on the 20th of July 1944, when a colonel from his entourage organized the overtaking in detail. During the respective meeting he placed his document briefcase, which in fact had a powerful bomb in it, next to the feet of Hitler, after which he left saying that he has to make an urgent phone call. 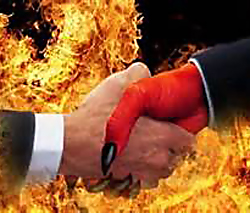 In the next few moments, an officer considered that the briefcase is discomforting the führer so he moved it on the other side of the massive oak wood foot of the table. The explosion occurred just a few inches away from Hitler, many people died and many were injured but he escaped with no injuries, defended by the oak tree wooden board. In the meantime, the plotting colonel told the people in Berlin of the success of the explosion and the people there acted accordingly to overtake the power.

There was a confusion which lasted for several hours between those who were overtaking the power and those who had found out that Hitler survived. After a few weeks, the führer was visited by marshal Antonescu who expressed his regret for what happened but Hitler replied: “I am protected by heavenly providence”. On the 30th of April 1945, exactly 13 years after the date of the “pact”, Hitler committed suicide in his bunker…