How yogis spent January 24th – a celebration of all Romanians 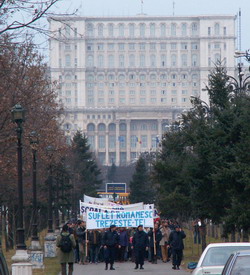 It was January 24th, the Day of Union from 1859. For many Romanians, a day like any other. Spiced with the news from TV about political conflicts mixed in which the Union was also mixed in. What President Traian Basescu did, how Prime Minister Calin Popescu Tariceanu spent his day… For us, the significance of January 24th wasn’t forgotten. January 24th is a celebration: a celebration of all of us who are Romanians.

We chose to be together on January 24th. We met in Unirii Square, in the centre of the capital and from there we walked down to Alba Iulia Square, on the rhythm of Ciuleandra and other patriotic songs. We felt with a thrill in our heart the soul of the Romanian people. We recalled those qualities which always honoured the Romanian nation, such as honesty, honour, courage and faith. We showed, through this march, that practicing


helps us to be closer to this feeling of “being Romanian”.

Some pedestrians watched us with kindness, others with indifference. But on the face of those stopping to watch the procession of almost 1,000 people could be read mostly: “Oh yes, today is January 24th, the Day of Union”. A group of reporters were spinning around the moving procession, they took pictures, filmed and presented then to the readers/viewers how “MISA yogis celebrated in their way the Union Day”, together with some short definitions of communion with the soul of the Romanian people.

It was January 24th. It was for us a mean to enjoy together that we are Romanians. And the heaven rejoiced with us and at sunset, although we are in January, it smiled back in an enormous rainbow, which embraced all Bucharest. 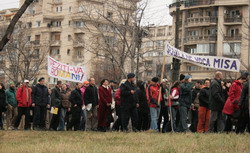 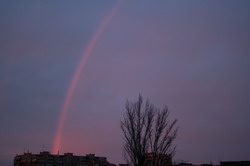 For Union Day, MISA yogis organize a march around the centre of the capital