I decided to pass the threshold, but I hardly managed

A gossip show on TV made me curious and I arrived on your website, not to find possible faults, but to tell you something, a brief experience that I had at the age of 21 years old. 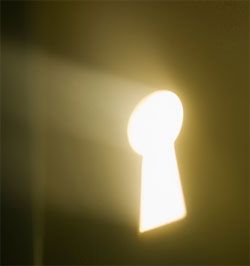 I was in session, very, very tired and I called an electrician to fix a light bulb. While I was waiting for him, I looked at the clock, and then I suddenly fell asleep, but somehow my consciousness was awake (being afraid not to fall asleep and to be unable to hear him knocking at the door). Originally everything started as a dream, I was in an amphitheater and I couldn’t find the right seat for an exam I was taking. I was being threatened that I was going to be thrown out. Suddenly in the front rows I spotted a man who, in reality, I loved very much. I thought to go to the back rows of the amphitheatre to see him better.

Up to this point everything was like a usual dream, but when I thought to go on the topmost row, immediately I got there through the power of thought, I did not need to take the stairs. From there, the amphitheatre no longer looked like an ordinary one, but had spiral shape. I no longer saw the man (I went up there for), but I knew he took a break and he was outside somewhere. I decided to go out too but I suddenly saw myself in a hallway, on a roof, where everything was dark, in shades of grey, and I did not know where to go. I met a strange woman with bandana on her head looking like a medical nurse during the war, nearly 50 centimeters taller than me, whose eyes looked like that of a crazy woman. Through eye glancing at me (i.e. telepathically) she asked me which door to enter (there were high doors on that hall), and I, telepathically also, suggested one of the doors, and she disappeared through it. I thought I should get the other door, at least to avoid meeting the strange woman again.

When I entered the door, I saw an indescribable light and blue sky… We were somewhere high, as if in heaven, I felt the need to step over the threshold of that door, though, inside myself I did not feel as if I was worthy. I was telling myself that I did not deserve that. I decided to step over the threshold, but I hardly managed it. Stepping over the threshold felt as if it took a minute, not a few seconds as normally. While I was stepping over it, waves and waves of warm light flowed through me and I was experiencing a state of bliss, which I cannot describe other than being so very intense that I could barely cope with it… 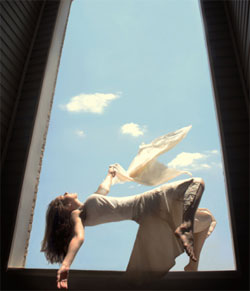 After passing safely to the other side of the threshold, in full blue sky, I looked down as if wanting to see where I had arrived. At my feet there were some white steps, whose end I couldn’t see, since they were ending somewhere in the clouds. From down there, a silhouette of a very tall woman stood up (about 3 meters, brown-haired and around 45-50 years old), and told me telepathically that I was allowed to ask a single question, and I, also telepathically, asked her if I would ever be together with the man again. The woman answered in the same way that I would not. Disapointed, I felt that it was the truth.
I wanted to wake up from this sleep, but I couldn’t move, as if I was stiff, I felt some very powerful vibrations in the throat and my mouth was clenched. I thought to say the prayer “Our father”, in order to get back to my senses, but I could not even begin… I made, however, some efforts, and when I uttered the first letters, I recovered, I woke up and bewildered, I looked at the clock, believing that I had slept a lot. In reality only about four minutes had passed.

Roughly this was my experience and indeed, even though I tried in the following years, I could never resume the relationship with that man. .. After this experience, I had states like this again, resembling this one, states that would also start with some vibrations in the throat, and I would simply freeze (usually when I would go to bed in the evening). I tried to repress them, since I was deadly afraid. Eight years have passed since then and I would like for you to explain to me whether this was an out of body experience or was it a dream? Maybe I could find the answer on your site, but I thought I’d better first describe to you the dream in my own words, so that I am not influenced by what I read there, and now I am about to read what is written on the site…

…I remember a TV show in which Gregorian Bivolaru was “tested” by the presenter and asked to perform something, a small miracle… and he told the viewers to focus on feeling a state of happiness. I was a teenager then, but I know that then I felt again some vibrations on the spine, and that I was very, very happy…  as if I’d been laughing all day long.

Thank you for listening to me!
God help us!

*****
Send us your stories about your spiritual states here: redactie@yogaesoteric.net.
The most beautiful letters from our readers will be published on our web site.

The Union of the Sun and the Moon- YAB-YUM position