Dandelions will pop up just about anywhere, from the side of the road to the middle of your lawn. But don’t get rid of this flowering plant, even though it’s usually considered a pesky weed. Learn how to make soothing dandelion tea or salad using dandelion flowers and leaves. 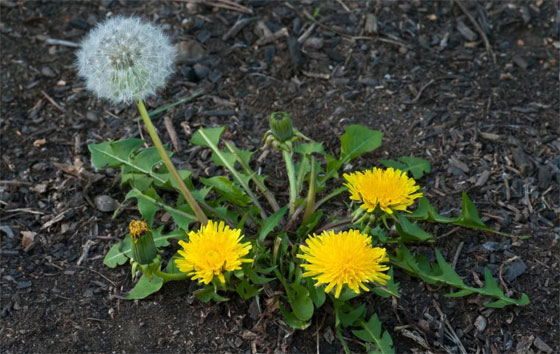 Dandelions, which are common in Europe and North America, are dismissed as weeds. But despite their reputation, dandelions offer several health benefits. You can harvest the flowers, leaves and roots of this edible plant and use them in the kitchen.

Dandelions are nutritious and contain the following vitamins and minerals:

Dandelion flowers, leaves and roots are used as a natural diuretic, meaning they can increase the production of urine. Dandelions are also used to promote digestive health and can serve as a hepatoprotector agent.

According to the National Center for Complementary and Integrative Health (NCCIH), using dandelion in the amounts commonly found in food is generally considered safe. But not much is known about the safety of taking dandelion in larger amounts. Dandelions can cause allergic reactions in some people. Allergic reactions may be more likely if you are allergic to related plants like chrysanthemums, daisies, marigolds and ragweed.

When foraging for dandelions, choose those that have not been sprayed with herbicides or weed killers or chemtrails. Pick dandelions “off the beaten path,” or those away from vehicle exhaust and dog walkers because you don’t want to use anything pets might’ve done their business on.

It’s best to collect dandelion roots in the winter because the roots are strong. You can also gather dandelion roots in early spring before new leaves and flowers start to grow since the roots have all the nutrition stored for the new plant. Choose older plants in large clusters that are about a year old and well-matured. Younger dandelion plants are a little bitter, but you can still use younger roots.

Here are five ways to use dandelions:

• 2 Cups of water
• 2 Tablespoons of roasted dandelion root (About 15 dandelions worth.)
• 1 Stick of cinnamon or 1/2 teaspoon of cinnamon chips
• 1 Teaspoon of fennel seeds
• Milk and honey (Optional)

Dandelion jelly can be used as a natural substitute for honey. The jelly can be eaten with biscuits, pancakes, toast or any food you’d normally pair jams, jellies or honey with.

Raw dandelion leaves can be used to make a salad. If you haven’t pursued eating dandelion greens in a salad, note that the leaves have a tangy, slightly bitter taste. The recipe below pairs dandelion greens with fresh and juicy ingredients like cucumbers and tomatoes. 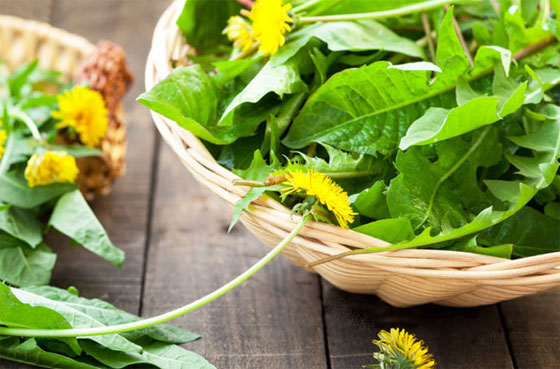 1. Pick four or more cups of fresh dandelion greens. Forage for young and tender greens before flowers bloom for best flavor.
2. Wash and clean the greens. Don’t use any yellowed or blemished leaves.
3. Wash the tomatoes and onion, then let them dry on paper towels.
4. Chop or tear the dandelion greens into bite-sized pieces. Alternatively, you can use the leaves whole.
5. Arrange the greens on four plates and add the sliced or chopped tomatoes, sliced cucumbers and rings of red onion.
6. Garnish with sliced almonds, pumpkin seeds, or other salad additions before serving.

– Flowers: after washing, pull the petals off of the flowers. Once you have a handful of petals, place them in a cup and pour spring water. Set the mixture aside to let it steep for 5 hours. Strain the liquid into a cup, then add honey before serving.

– Leaves: after washing the dandelion leaves, place them on a cookie sheet lined with paper towels. Set the leaves aside in a warm, dry place until they dry out. Once dried, store the leaves in an airtight jar. To make macerate, take a teaspoon of dried leaves and steep before serving.

Don’t use freshly picked dandelions because they have a high water content that can make the oil a little sludgy, with a higher likelihood of spoilage. After you forage dandelion flowers, spread them out in a single layer on a plain paper towel and let them air dry for several days. If some of the flowers turn to puffs, you can still use them. To make dandelion oil, fill a canning jar halfway with dried dandelion flowers. Cover with twice as much as your chosen carrier oil, or to the top of the jar. You can use carrier oils like apricot kernel, avocado, hemp, olive, sweet almond, or sunflower. To make a quick infusion, set the uncovered jar into a small saucepan filled with several inches of water. Heat the mixture over a low burner for a few hours, but make sure the water doesn’t evaporate. Remove from the heat and strain. This quick infusion method is the best way to infuse coconut oil. When the oil is done infusing, you can make some salve.

1. Pour the dandelion oil into a heatproof container. If you’re using tamanu oil, use only three ounces of dandelion-infused oil and 0.5 ounces of tamanu oil.
2. Add the beeswax pastilles to the heat-proof container. Set it gently into a pan with inches of water like when you infused the dandelion oil.
3. Gently bring the temperature up to medium-lowish heat, then let the container stay in the makeshift double boiler until the wax melts.
4. Remove from heat and carefully pour into tins or jars then set aside until the salve is firm.

Note:
• This recipe makes about four ounces of salve. One batch fills around two two-ounce glass jars or tins with a bit leftover. You can also store the salve in a clean glass canning jar.
• The shelf life of dandelion salve is at least nine months to a year.

If you see dandelions in your backyard, gather some flowers, leaves, or roots and make some soothing tea or healing salve for sore muscles and achy joints.