Patrick O’Carroll cites credible sources to confirm that society is hostage of globalist traitors (our “leaders,” health officials) in the pay of Satanist Jewish bankers and Freemason psychopaths who want to cull and control it. 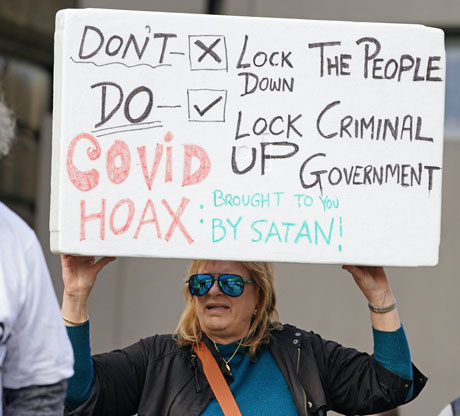 In 1918-21, by contrast, the average age of Spanish Flu death was 28 and that was a whole other ball game because the Spanish Flu was a real and scientifically-verified pandemic, whereas the covid HOAX has only ever been a scientifically-unverified PLAN-DEMIC or SCAM-DEMIC.

Fake jargon was jerrybuilt into the narrative when in 2009 the UN’s Worst Health Organization (WHO) redefined “pandemic” to mean anything that it, the WHO, deemed to be a “threat” whenever it arbitrarily chose to just decree this, and whenever it wanted to. What an absolute disaster the UN’s Worst Health Organization (WHO) really is.

Professor Dr John PA Ioannidis of Stanford University, Santa Clara, CA, cites statistics whereby 99.8 percent of untreated covid sufferers actually recover. Which means that, far from meriting the status of a scientifically-verified pandemic, covid is merely a rough form of Influenza that folks should consider going through in the normal way but also choose to treat using all the traditional common-sense means such as Vitamin D, Vitamin C, Zinc etc.

Professor Ioannidis also stated the highly obvious; that there are HUNDREDS of medical reasons why locking down healthy people actually contributes to excess fatalities and why this is necessary to stop immediately.

Only brainwashed Conspiracy Theorists believe that protection against disease can come from a syringe. In truth, the only protection is from a strong immune system, which detoxifies, cleanses and protects in the normal way. In other words, human health is rarely dependent on what comes out of a syringe; that is just media brainwashing.

Recently, the highly astute Catherine Austin Fitts pointed out that what the power-elite and their media lackeys are attempting to label the “Deadly Delta Variant” is in fact INJURY caused by the first jab of the Experimental-Covid-Bioweapon-Injection (ECBI, Not A “Vaccine”).

So, whatever you do, do NOT allow yourself to be duped into believing that any “Deadly Delta Variant” is anything but a knock-on effect of the very first jab of the Experimental-Covid-Bioweapon-Injection (ECBI, not a “vaccine”); because falling for this particular media lie, which is a gigantic whopper, could even prove fatal for you or for your loved ones.

Max Igan knows just how fond the power-elite are of using special code-words to designate their psychological operations. One such designation is “the Atom Bomb” (pronounced “Adam Bomb” meaning Satan’s bomb to kill Adam (meaning all humanity).

Another such designation is “the American Dream” because only people who are asleep can possibly believe in it. Recently, Igan confirms too that it is very clear that the “Deadly Delta Variant” is called after the Delta-Wave of deep sleep because only people who are fast asleep might possibly fall for believing in the hoax that is the “Deadly Delta Variant”.

Dr Michael Yeadon MD is an ex-Pfizer executive who said he could not think of a benign reason behind what he analyzed in the existing design of the Experimental-Covid-Bioweapon-Injection (ECBI, not a “vaccine”). In other words, Yeadon was clearly hinting that he believed there was genocidal intent behind the Experimental-Covid-Bioweapon-Injection (ECBI, not a “vaccine”). When someone says “no benign reason”, that usually translates to meaning harmful, injurious, adverse, pernicious, damaging etc. In a nutshell, Yeadon was hinting at genocide and at genocidal intent on the part of the power-elite, major pharmaceutical corporations and the mainstream-media.

Rumor has it that the power-elite have cooked up a binary weapon to kill more “useless eaters”, the first half of that binary weapon being 5G, and the second half being the Experimental-Covid-Bioweapon-Injection (not a “vaccine”). Taken together, these are said to form a binary-weapons system that is intended to increase hemorrhagic disorders so as to kill more “useless eaters”.

“Fullerton Informer” Joe Imbriano’s website 5Gdangers.com has long stated: “5G is a war on oxygen, iodine, iron, hemoglobin, and a war on the central nervous system. 5G will cause illness that will be blamed on a fake virus to force vaccinations on people”. In several videos there, he gives all the technical details and states his grave concerns regarding, and his total dismay at what is now being rolled out worldwide.

There is very little humanity in all of this. It appears to be nothing but genocide, profit or politics. Proper medicine and the humane treatment of humans seem to have left the building a long time ago.

Any fool can see that there is really something much more sinister going on here. And the body language of those “prophetic” “experts” called Gates tells us that they probably know something colossal that, sadly, we have yet to find out.