Over 4000 Yoga Sudents Participated, in the Beginning of May, in the Yogi Camp in Băile Herculane.
Each spring, in the beginning of May, Băile Herculane resort in Romania hosts the international yoga camp organized by the MISA Yoga School. For 10 days, the picturesque resort, quite empty during the year, quivers with tourists and activity.
There was no exception this year either: more than 4000 yoga students, most of them Romanians, but hundreds of foreigners as well, from 20 countries, came to Herculane in order to participate in the events within the yoga camp, and to practice yoga in the picturesque and reviving ambiance of the Valley of Cerna river.

Under the generic theme of this year’s camp – “The profound and overwhelming state of mystery that reveals God the Father”, a series of exceptional spiritual events took place: conferences, initiations, meditations, spiral meditations, invocations and collective prayers, inductions in the beneficial state of romantic trance, as well as artistic performances. All together, these manifestations turned the camp in Herculane into a genuine spiritual celebration.

The events that attracted the largest number of participants were, as always, the spiral meditations and the conferences held by the yoga teacher Gregorian Bivolaru. In order to make it feasible for as many people as possible to attend, these events took place under the open sky, on Coronini plateau.

In the center of the photo below, which was taken from the opposite slope, what seems to be a tiny group of people it’s actually a yoga spiral made of more than 2000 participants.

In the following photos, you can see how the spiral is being formed: people wait in lines, according to their signs of the zodiac (in the left side of the picture)… 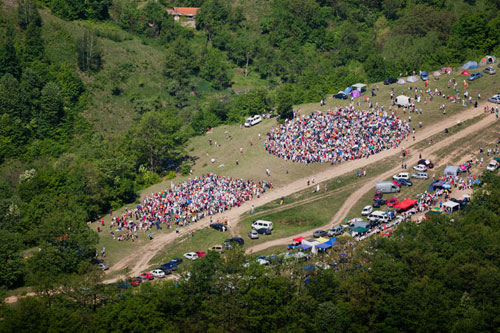 …then they join hands in lines that contain human beings of each sign of the zodiac, and then they merge into the spiral, line after line, thus building this yang spiral with their own bodies. 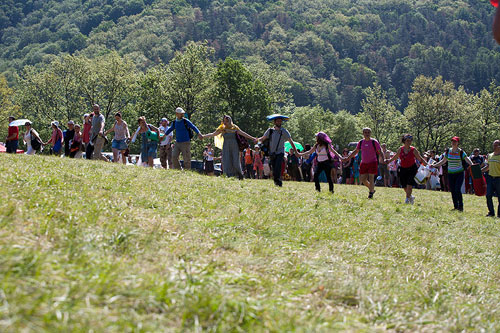 This is how the spiral looks like in the end: 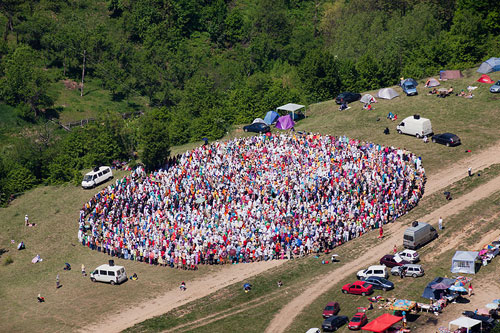 During the yoga spiral meditation, all participants stand up, holding hands. 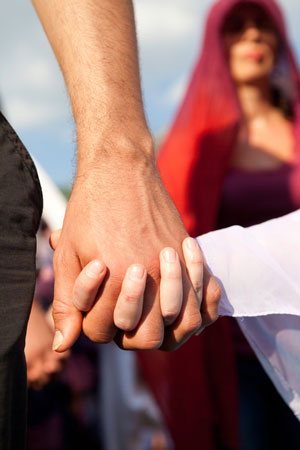 Both male and female yoga students, of all ages, take part in the spirals. However, there are some spiral meditations that are designated exclusively either for men or for women. 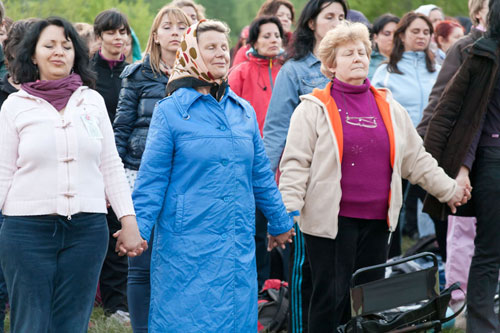 The following photo has been taken at the end of a spiral meditation followed by the induction of the state of spiritual liberation through divine miracle. This posture allows the participants to be aware of the special energetic effects that appear in the head area after the meditation. 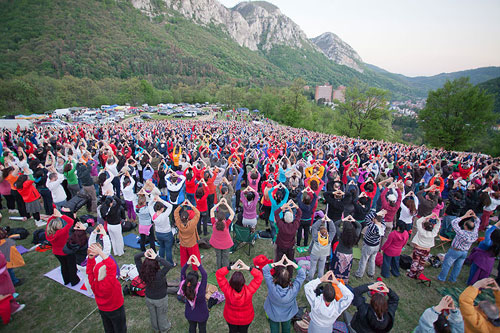 The meditation has a wide range of effects, and one can be aware of some of them during the following days. Nevertheless, what you will feel right after the meditation is a state of harmonious energizing and euphoric peace. 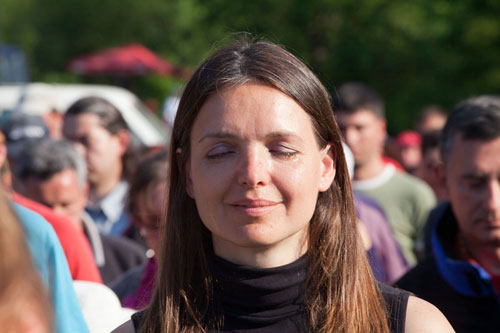 Yoga stundents from all over the world begged God to help the humanity during this difficult period that we are undergoing, by performing a collective prayer addressed to God the Father. 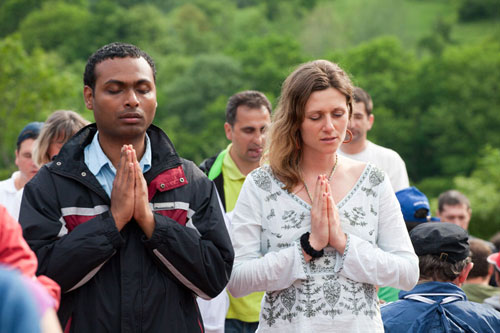 After an ample conference to present recent events connected to the manifestation of some eminently beneficial extraterrestrial civilizations who want to help the humanity, the yoga students participated in an extraordinary invocation to God the Father and to the beneficial extraterrestrials. The invocation took place one more time during this camp, while it was raining heavily. The amazing lightning show delighted the brave ones who endured till the end of this action. 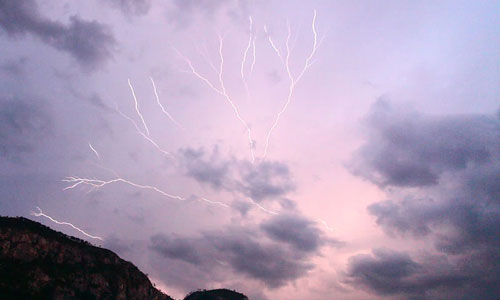 Although there were some rainy days, people held on to their enthusiasm and came in large numbers to the meditations and conferences on the plateau. 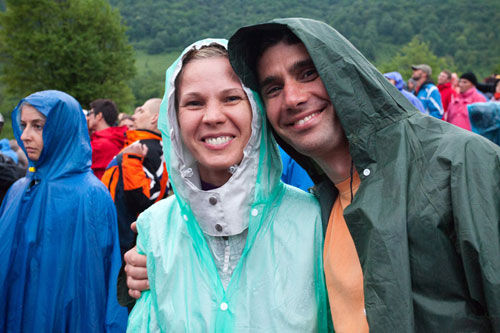 In the following days, their perseverance was rewarded also with… lots of sun! 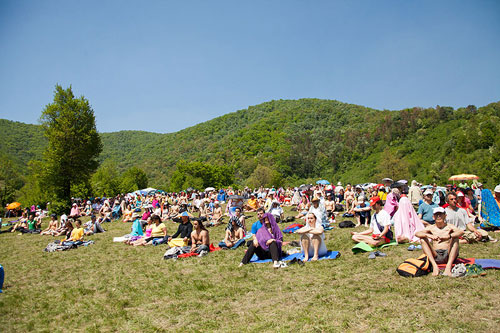 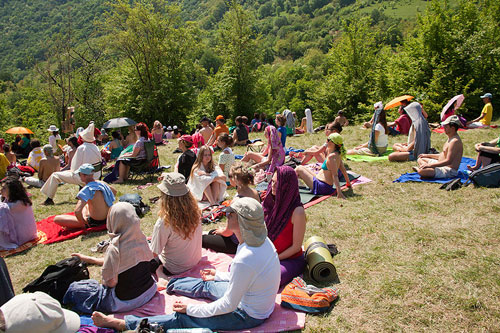 The yoga students fully enjoyed the vacation in the mountains. Some went to hikes, which aroused their appetite for… hatha yoga! 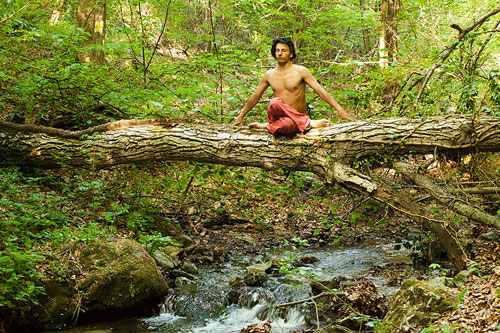 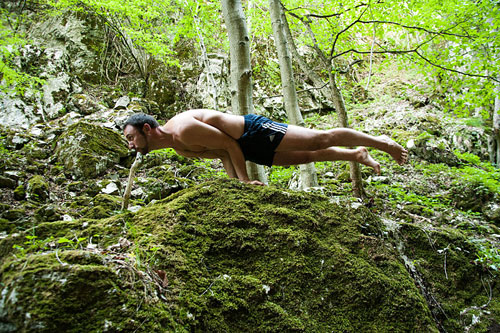 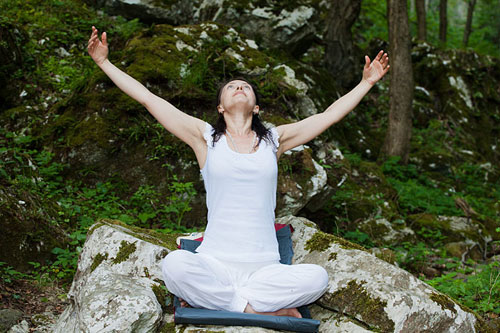 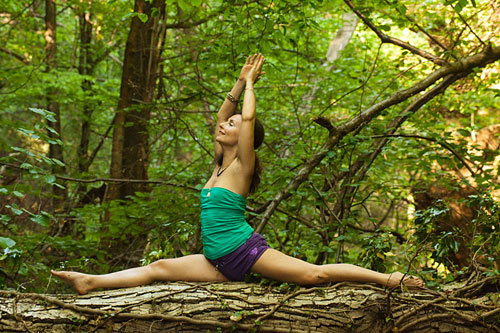 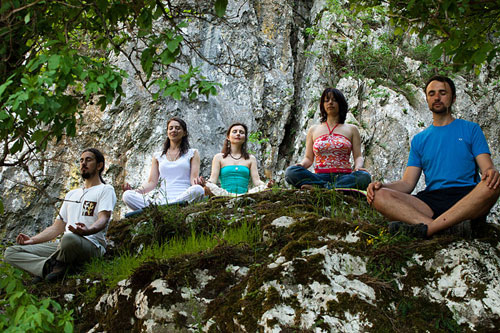 Charged with energy and bubbling over with high spirits, the yoga students filled the halls where the other meditations and conferences in the program took place. 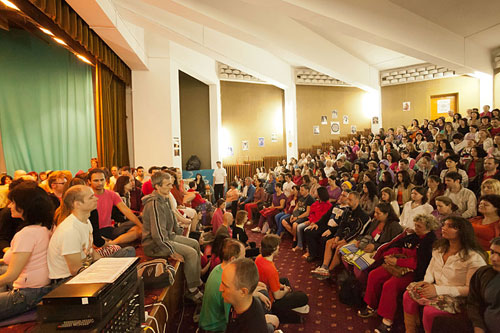 The sum-up of this camp, for most participants: the matchless joy of spending quality time with friends, a great amount of energy, model states and top spiritual experiences, as well as lots of interesting information. Enthusiasm to practice yoga and… vacation plans for August, when they will meet again, in Costinesti.