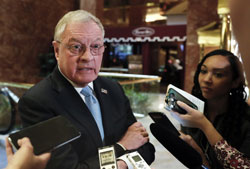 If he could, President Donald Trump might roll up his sleeves and single-handedly manage U.S. foreign and military policy. He would be the only man in the room for the coming negotiations with Russia and NATO. He would personally select targets for lethal strikes in places like Yemen, Iraq and Syria. He might even spend his afternoons piloting each of the unmanned drones and choosing the right moment to pull the trigger.
But he can’t. It’s too much work for one man. Instead, he’ll likely pursue his overseas agenda through the administrative instrument over which the White House has the most direct control – the National Security Council, or NSC, and the national security adviser.

John Podesta, who chaired Hillary Clinton’s failed 2016 presidential campaign, emphasized the raw power of the NSC in a four-page staffing memo that he sent to President-elect Obama in 2008. “The White House really has two chiefs of staff” Podesta wrote: “the actual chief of staff and the national security adviser, who runs the NSC on the president’s behalf”. The memo was among the hacked Podesta emails published by WikiLeaks in the run-up to the election.

Evidence of the NSC’s vast, opaque powers runs through postwar presidential history. As President Nixon’s national security adviser, Henry Kissinger cemented his access to the Oval Office and outmaneuvered his rival, Secretary of State William Rogers, eventually taking Rogers’s job. Under President George W. Bush, the National Security Council was discussing the possibility of invading Iraq as early as July 2001, at the suggestion of Secretary of Defense Donald Rumsfeld.

Paul B. Stares, a senior fellow at the Council on Foreign Relations who studies the NSC, characterized Trump as “someone who likes to be in total control, believes he knows more than his subordinates, encourages competition and tension among them.” In an email, Stares said these qualities are “antithetical to all the virtues we look for at the pinnacle of the national security decision-making process. So the question is: Is he going to change? Or are we going to see a very different NSC process?”

“The president is the key person,” said David Rothkopf, the CEO and editor of Foreign Policy and the author of a book on the history of the NSC. “Trump has no experience dealing with the various agencies in question, nor with the White House apparatus. He has essentially no experience with anybody in the national security community. There’s going to be a kind of battle: who’s going to teach him national security? Who’s going to show him the right way to run a meeting, how to delegate, how to use the NSC, how to use the agencies? If his professor is Trump himself, who doesn’t know anything, that’s one thing. If it’s [former Defense Intelligence Agency director and Trump adviser] Michael Flynn, a deranged maniac, that’s something else.”

Formally known as the “assistant to the president for national security affairs,” the national security adviser heads up the NSC, one of the federal government’s most powerful and least transparent entities. The council was created in 1947 as part of the far-reaching National Security Act. Its original purpose was to coordinate the Department of State and the Department of Defense in their efforts to husband American power around the globe. Today, the NSC has evolved into the federal government’s foreign policy spinal cord, the most direct bureaucratic means presidents can impress their will directly onto the rest of the government, with a minimum of external oversight. “If it [the NSC] doesn’t work, it is like congestive heart failure,” said David C. Miller Jr., a senior fellow at the Atlantic Council, in a congressional hearing in September 2016. He called the national security adviser “the most important presidential appointment not subject to Senate confirmation.” 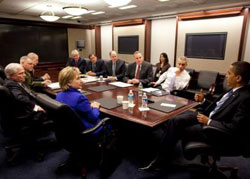 The hub of the NSC is the NSC Principals Committee, a kind of super cabinet. Its nerve center is the Situation Room in the West Wing basement. Twelve of the 13 people depicted in the famous White House photo taken in the Situation Room during the Osama bin Laden operation were connected to the NSC. By law, the Principals Committee includes the president, vice president, and secretaries of defense, state, and, since 2007, energy. The committee’s exact composition varies from meeting to meeting, to be decided by the president and senior White House staff. Within the broad strokes of the original 1947 law, as updated over the years and then amended by the Goldwater-Nichols Act of 1986, NSC quite literally makes its own rules, and those rules are set by the president.

A few weeks after inauguration, the new NSC will issue its first memo, signed by President Trump. The memo will define who is part of the Principals Committee and the Deputies Committee, which is made up of the principals’ seconds-in-command. Even the names of the memos bear the fingerprints of the president. For Kennedy, they were “National Security Action Memorandums”. For Reagan, they were “National Security Decision Directives”. Obama called them “Presidential Policy Directives”. According to the Federation of American Scientists, Obama has issued 43 of them over eight years. Twenty-two have been made public in whole or part; the other 21 remain secret.

The NSC is not subject to the Freedom of Information Act, although Rep. Jackie Walorski, R-Ind., proposed a bill in 2016 that would have changed that. It has a tiny stub of a website and a small budget: $12.6 million under the Executive Office of the President. It has no headquarters of its own, operating out of the West Wing and the Old Executive Office Building.
Unlike the secretaries of defense and state, the director of the CIA and many other heads of key agencies, the national security adviser and NSC senior staff are not subject to Senate confirmation. During Obama’s term, Capitol Hill became more partisan, which led to even more power concentrating within the NSC, with the president’s most trusted allies obtaining proximity and influence inside the White House. Meanwhile, more experienced figures, who may not have been the president’s first choices but could survive Senate confirmation, were shipped off to the agencies.

After controversy over John O. Brennan’s role in the Bush-era torture program forced him to withdraw his name from consideration for CIA director in 2008, he obtained arguably more influence inside the White House as assistant to the president for homeland security, a role that expanded under Obama to be a dual-hatted NSC role that also served as a deputy to the national security adviser and a full member of the Principals Committee. Working in a basement office a few steps away from the Oval Office, Brennan wound up with better access to the president than Obama’s first national security adviser, Gen. James Jones, and his director of national intelligence, Dennis Blair, both of whom departed during the administration’s second year. “There have been some complaints that Mr. Brennan has exercised an influence on intelligence activities that more properly belongs to the director of national intelligence,” noted a 2011 report by the Congressional Research Service. 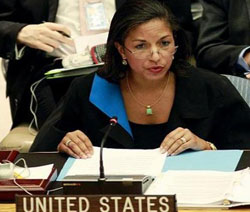 Another would-be cabinet member who wound up on the Principals Committee is Susan Rice, who in 2012 withdrew her name from consideration for secretary of state in the midst of criticism from Congress over her comments on the Benghazi attacks. John Kerry, someone with more experience but weaker White House ties than Rice, was confirmed as Obama’s second secretary of state; Obama appointed Rice to be his third national security adviser.

The NSC exercises so much control that it can become a kind of scapegoat for an administration’s worst mistakes. Under Reagan, NSC had an in-house “special activities” or covert action wing, which organized much of the Iran-Contra arms-for-hostages fiasco. When the plot unraveled, a special prosecutor came down hardest on the NSC, particularly National Security Adviser John Poindexter and one of his staffers, Oliver North.

In the case of Obama’s NSC, many of the administration’s Senate-confirmed heavyweights, including members of the Principals Committee, have complained about being shut out. For all his accomplishments, Obama struggled to forge deep relationships with old Washington hands – Hillary Clinton and Joe Biden being the exceptions. In his memoir, former CIA Director and Secretary of Defense Leon Panetta wrote that his speeches and interview requests had to be cleared by the White House and that the administration’s senior staff exerted tight control over his interactions with Congress. Robert Gates, Obama’s first secretary of defense, called it “micromanagement”.

Under previous administrations, the NSC’s third-tier “interagency” or “directorate” committees had two chairs: one from NSC staff and one from outside agencies. Under Obama, most of the committees eliminated the outside co-chair. “This may be one reason why there was criticism of the Obama administration centralizing control of the process,” says Stares. “They might have done that to maintain control and discipline, but it does come at a cost. You can be perceived as micromanaging, or distrustful.”

In an email, Ned Price, an NSC spokesperson, wrote that the council draws most of its in-house staff from agencies like State and Defense. “Almost 90 percent are career public servants spending one to two years on the NSC staff before returning to their home agency.” Price put the number of NSC “policy and leadership staff” at less than 200. Rep. Ed Royce, R-Calif., who chairs the House Foreign Relations Committee and recently held hearings on NSC reform, has claimed that the total staff level is above 400.

Stares said that the council’s increasingly broad responsibilities carry a risk of being overly focused on the short-term. “We’ve got to get away with being fixated on structure and process and numbers and instead think about what we want the NSC to do well,” he said. “The common lament seems to be that the NSC is in an endless struggle to manage day-to-day events. There isn’t time to pause, think and look at the big picture.”

Obama will be leaving the NSC with an unusually flat structure. Beneath the principals and deputies committees are more than 20 “directorates” organized around regions and issues. There was speculation that Hillary Clinton’s NSC might take a more hierarchical form, with a thicker layer of presidential assistants and White House “czars” – presidentially appointed mid-level staffers – mediating between the directorates and the Deputies Committee. 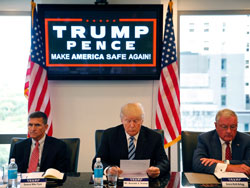 Today, the Republican Party holds a thin 54-46 majority in the Senate. If the Senate proves hostile to Trump’s cabinet choices, it is likely that some of his innermost circle will wind up on the NSC, as the president can choose to populate the Principals Committee with his chief of staff and other non-confirmed appointees. Shortly after the beginning of Obama’s first term, the Principals Committee had 13 full members. Two of those members were neither elected nor subject to Senate confirmation. Another two members of his senior White House staff were “invited to attend every NSC meeting”.

Trump could respond to congressional concerns about growth in the NSC by cutting its staff numbers, but Price, the spokesperson, said that recent presidents have not exercised total control over NSC staff, at least not at the lower levels. “The vast majority of those staffers are career public servants,” he wrote in an email, “who, as a general matter, do not turn over with a change of administration.”

So far, little is known about Trump’s plans for the NSC’s organization, except for the leadership: Retired Army Lt. Gen. Keith Kellogg, age 72.

A US school has succesfully replaced detention with yoga meditation. The results are stunning