SAN BAO, the three treasures inside every human being

The A, B, C of inner alchemy according to the Taoist tradition

“If you want to perfect the Diamond Body by non-leaking out,
Warm diligently the roots of Consciousness and Life.
Kindle the Light in the blessed Land that is always extremely close,
And refugee here let your true Self live forever. “
(“Book of consciousness and life”) 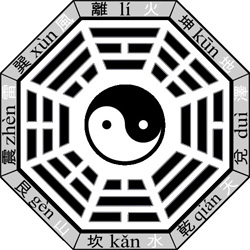 In the millenary Taoist tradition, the concept of SAN BAO refers to three mysterious subtle structures of the human being, known as the three TAN TIEN, structures that are particularly important. They are regarded by the Taoist sages to be some real treasures inside every human being, and their knowledge through direct experience is extremely valuable in spiritual practice. They correspond to a potential of a primordial natural innate force, to which the very life of the human being depends upon.

In short, we could define the TAN TIEN as a subtle cavity, a kind of a reservoir, where the elixir of immortality obtained through alchemy is stored. The Taoist tradition states that in every human being’s microcosm the subtle energy travels through a complex network of subtle energy channels, but alongside them there are certain mysterious places of concentration of energy, which constitutes genuine focal points. Out of these, the three TAN TIEN are the most important structures. These real “inner treasures”, the three TAN TIEN, are associated with the three basic energies of the human being, which in the Taoist tradition are associated with the vital energy, the pranic energy and the energy of the soul. These are known as JING (essence), CHI (energy) and SHEN (the soul).

Like all genuine spiritual traditions of our planet, Taoism has a complex and global vision of the human being and its existential condition. Thus, the desire of inner evolution and spiritual transformation that allows the achievement of the state of godhood is founded by a coherent and consistent philosophical vision, which describes the process of the universal creation, and how the creation (and by implication of the human being) can return to its divine unique Source. In order to understand the Taoist approach to the transformation process of the human being through spiritual practice, we have to present it in the context of the philosophical vision on the process of universal emanation and absorption. 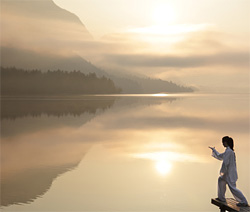 In the Taoist vision TAO – the Supreme Divine Principle (which in reality is GOD the FATHER) – is the one which, in the order of manifesting emanation, gives birth to the next principle, in which its emanating force begins to manifest -this is WU CHI (or TAI CHI). TAO (or in other words GOD the FATHER) creates everything that exists starting from his own energetic substance, CHI. The process of emanation goes through two complementary stages, ranging from rest  (YIN), to activity (YANG) and from activity (YANG) to rest (YIN). TAI-CHI joins and synthesizes in unity these two complementary trends. WU-CHI (TAI-CHI) is the ultimate, unconditioned aspect, from which the two complementary forces, YIN and YANG, are born and then the five elements. Heaven and Earth were created by the manifestation of these two principles. YANG gave birth to Heaven and YIN gave birth to the Earth.

Once the TAO emitted its unique creative force, this began to manifest in alternating ways. Out of the non-differentiated matter, under the influence of the two polar energies, YIN and YANG, all living creatures were born. The peak of the YIN energy – condensed in the Earth – is expressed through passivity full of calm and tranquility. The peak of the YANG energy – condensed in the principle of Heaven – is expressed through fertile activity. Matter is nothing else but a condensed energy, more manifested we could say, more differentiated, “heavier”, more YIN, while the “abstract” energy is a less manifested energy, more non differentiated, “lighter”, more YANG. YIN and YANG are divisible, but inseparable. They will spawn, within the emanating process, the five process phases and then an increasingly bigger differentiation.

Spiritual practice aims for the reversing of this process, the return to the supreme origin out of which everything was born, in other words, the return to the Unique Divine Essence, which means a real inner alchemical process of transmutation, sublimation and inner alchemy of matter into energy and of energy into Consciousness (Spirit).

The three TAN TIEN – their description and location 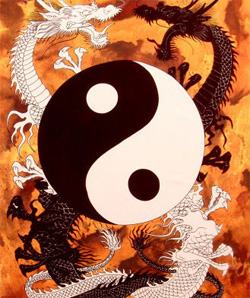 The first TAN TIEN is also called the Lower Cinnabar Field and is associated with JING, the so-called “essence” in the Taoist tradition. The essence (JING) refers to the flesh, to “basic” materials that support physical life, being a form of potential energy which is currently designated by the name of vitality and is primarily associated with sexual energy.  It is “preserved” in the suprarenal glands, in the reproduction organs and in the sexual secretions. Its essence is immortal, it is stored in enzymes, hormones, etc., manifesting as a sexual impulse. Its zone of projection is KANDA, being thus the main focal point of transmutation of the creative potential in subtle energy. Its place of storage is the first TAN TIEN, which is the chamber of man’s vital essence of the man and woman’s uterus. The lower TAN TIEN is of great importance for the human being, considering it is the centre from which the energy ascends and descends, this being the reason for which it is called the “gate of breathing”. In this area the transformation of the creative essence takes place or, in other words, of the creative potential into energy (CHI), it thus constituting the headquarters of some important alchemical processes. From the subtle point of view, it supports the inferior centers of force, MULADHARA, SWADHISTHANA and MANIPURA CHAKRA.  The second TAN TIEN, also called the Middle Cinnabar Field is located at the level of the chest, being connected with the thymus and immune system, and in particular to the subtle centre of force ANAHATA CHAKRA. It is the place where the energy (CHI) is transformed by processes of sublimation and alchemical transmutation into   consciousness, more specifically in what we might name the energy of the soul, SHEN. Therefore, this TAN TIEN has a key role in awakening of the soul.
The third TAN TIEN or the Upper Cinnabar Field is located inside the head, at the level of the forehead, being connected with the epiphysis, hypophysis and hypothalamus. It is also called “The original cavity of the immortal spirit”, being a zone of subtle projection in which the energies of essence merged and unified with the energies of life give birth to the so-called “essences of immortality”. Its subtle importance is major, this TIEN TAN being a main access gate to the revelation of the Immortal Self ATMAN. Practically we could say the transformation of the individual consciousness in universal consciousness takes place in this area and the supra mental energy is very much amplified to attain the state of deep identification with the Creative Beatific Void, WU, of the Supreme Divine Consciousness, TAO. We can become aware of this TAN TIEN in a state of lucid and detached witness against the mental fluctuations, in which we aim, on a background of inner silence, to deepen a state of pure contemplation of this area of subtle projection.

Basically, the alchemical process of returning in the Supreme TAO lies in taking the road opposite the emanating process, transforming, through transmutation and sublimation, the essence (JING) into pranic energy (CHI) in the lower TAN TIEN, and then CHI in SHEN in the middle TAN TIEN and in the end SHEN in the Divine Beatific Void (WU CHI) in the superior TAN TIEN. The body is in correspondence with JING, the mastery of the physical universe being achieved through the full awakening of first TAN TIEN. The astral body is associated with the CHI Energy and the causal body to SHEN.

In conclusion, we can say that the three TAN TIEN are true inner alchemical athanors in which the most important processes of transformation of the three fundamental principles of the human being take place. The “process of building” of these inner structures constitutes an alchemical work that awakens our whole spiritual being, thus enabling us to return in the great Void, in the Supreme TAO.