Scientists around the world are discovering that the Covid-19 vaccines are causing the recipients to develop deadly blood clots, and all three inoculation manufacturers are getting “thrown under the bus” for this worldwide epidemic. 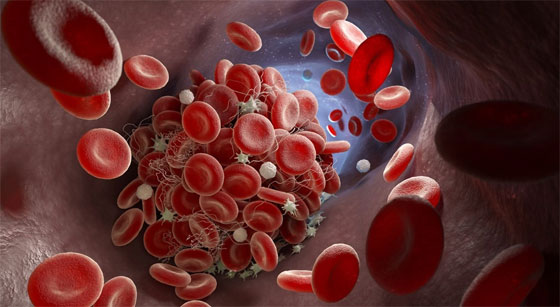 One blood expert in Germany says a preservative in the AstraZeneca jab, EDTA, when it combines with stray proteins, is directly responsible for causing deadly blood clots.

A 17-year-old basketball player from Utah suffered deadly blood clots on the inside and outside of his BRAIN almost immediately after getting a Covid inoculation, which doctors discovered when his parents brought him to the hospital with severe neck swelling and intolerable headaches. The boy could not even move his neck without using his hands. His mother said he was perfectly healthy before that vaccine.

A man in Colorado said the Moderna vaccine made him develop two blood clots in his left leg. Many European countries have suspended the use of AstraZeneca’s vax-clot jab after charting so many blood clot cases. This blood clotting disorder caused by vaccines is already at epidemic proportions, and could soon be the next pandemic. Instead of dying from the Black Plague, all the vaccinated sheeple will suffer from the injected mRNA protein/prion-creating “Blood Clot Plague.”

The FDA announced Johnson & Johnson jabs must now carry a warning about blood clotting risks and low platelet count. Yes, the FDA is outright telling everyone that vaccines are clotting blood. That has to be the most dangerous side effect ever. They’re calling them “clotting events” because the word ‘event’ sounds fun, like some sporting event or a concert. Recipients and caregivers are supposed to read these vaccine warnings that are printed on the vaccine insert, but nobody ever does.

Scientists have discovered ‘rare’ blood clots occurring after humans get the J&J “Janssen” vaccine. These are rare blood clots called CVST – cerebral venous sinus thrombosis, as these clots obstruct the sinus channels of the brain, and this can cause deadly hemorrhages. Already nine patients suffered from sudden CVST after getting the Janssen jab, one of whom has passed away and two others are in critical condition.

Scientists in Israel have now linked the Pfizer Covid-19 vaccine to heart inflammation, most likely due to blood clots clogging arteries, veins and or capillaries. If the heart gets overworked too much, these folks will suffer severe myocardial infarction.

All of this is occurring from the first (or second) of a series of Covid jabs that will certainly be followed up with booster shots and shots to address all the new, more virulent strains that have morphed and developed around the world. The question looms: How many million or billion people will suffer massive vax-clot blood plague from MORE mRNA medical experiment inoculations?

Any of these vaccinations that are suspended, recalled or declared too deadly for humans, are simply sold to another country (at wholesale pricing) that is unaware of the dangers. Bill Gates loves to send dirty vaccines to Africa and pretend he’s trying to help black people with medical care, but he hates blacks and targets teen girls for sterilization, so there’s that (tetanus vaccinations). These vaccines today are absolutely NOT safe and NOT effective, and the world is necessary to come to grips with that fast, or pay the ultimate price.

“What has been discovered by the scientific community, is the spike protein, on its own, is almost entirely responsible for the damage to the cardiovascular system, if it gets in the circulation.” – Dr. Byram W. Bridle, phD.

For years, scientists have said that when you get a vaccine, the concoction (this time add mRNA proteins) would stay in the (shoulder) muscle tissue, and do their immune system conjuring work from there, but now, they’ve discovered these proteins getting into the blood and even crossing the blood/brain barrier. This scientist is clarifying that the assumption of the scientific community, up until now, was that mRNA did not enter the blood or cross the blood/brain barrier, knowing that if they did, it could cause blood clots and brain damage.

Have a careful listen to the most important whistleblower possibly ever. Introducing virus researcher and Covid-19 vaccine expert virologist, Dr. Byram Bridle, who may just be responsible for saving millions (or even billions) of lives by telling the truth about blood clotting caused directly by mRNA inoculations. You wanted scientific proof that the Covid vaccines are dirty, dangerous and deadly? You got it.

Anyone who has not been jabbed with dirty Covid jabs yet, realize that VCD (Vax-Clot Disorder) is sweeping the globe and there’s scientific proof that it’s real.

Matt Le Tissier: “I’ve never seen anything like it… It’s unbelievable how many sports…