At the end of October, an open air art exhibition was launched in Paris, with the name of “Hors les murs” (in other words, “Outside of the walls”). The theme of the exhibition is winter and its holidays. Right before the opening of the exhibition, one of the works was subject to scandal and public controversy that had an unexpected ending. To be more specific, this was a strange “work of art” of an even “stranger” American artist named Paul McCarthy. He contributed to the exhibition in Paris with a monstrous object entitled Tree. This was actually a green rubber inflatable “appliance” that was also accompanied by a electrical equipment. The name Tree, the green, the lights – with the context of a Christmas exhibition – might suggest to us that this was a Christmas tree. And yet, the “artist” Paul McCarthy had, to say the least, a quite awed view on the subject. Anyone could see that right after the erecting of the above mentioned “piece of equipment”, it looked closer to an anal plug than to the iconic image of a Christmas tree. 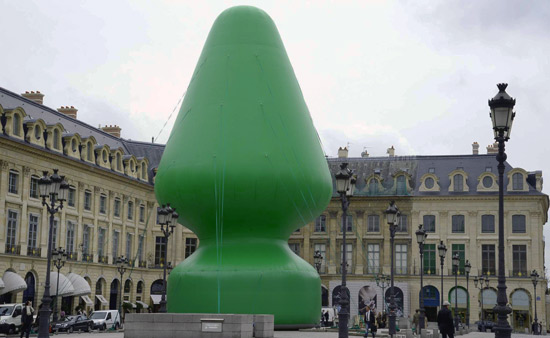 The public in Paris was not indifferent in any way. Leaving aside all the snobbery of the “cult” society, people promptly protested against it. Not only they considered it to be something of a bad taste, but it was even taken as an insult for the Christians who lay great emphasis on the winter holidays. But the Paris city hall did not listen to the citizens’ complaints, so some of them cut the cables supporting the whole establishment. Fearing the possibility of the whole thing collapsing, the technicians deflated the green rubber. 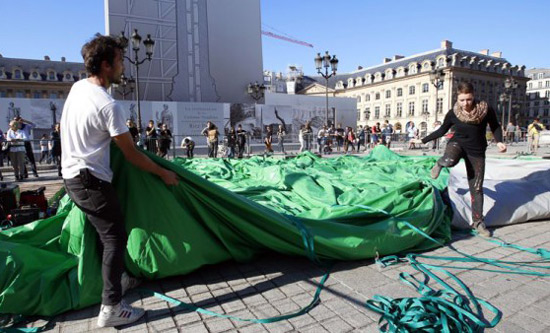 The Paris city hall interfered at this point and stated that they won’t be intimidated by an “act of vandalism”. Anne Hidalgo, the mayor of Paris, stated that the city will not “give in to those who threaten the artistic freedom of expression”. The organizers of the exhibition said they will re-inflate the controversial “sculpture” as soon as possible, before opening the exhibition. However, Paul McCarthy receded, stating that he does not want to cause any violent debate with those who do not understand the subtlety of its symbolism and artistic expression and since he didn’t want his “work of art” to be endangered in any way, he decided to withdraw it from the exhibition.

This incident makes us wonder about the strange twist of values in contemporary society. An inform inflatable rubber object, with no harmony or artistic meaning, bears the title of “sculpture” and “work of art”. Even though it blatantly mocks such an beloved Christian symbol, their voice is not taken into consideration, because the so-called artist has the right to freely express himself, even if by doing so, he offends millions of citizens of Paris. On the other hand, the group of those who stood against it are considered to be violent criminals, and their act of cutting the cables supporting the green monstrosity were called “acts of vandalism”.

We can ask ourselves, rhetorically, what would the great artists of Paris think about this, or even, the architects who erected the monuments of this beautiful city, or those who designed its bridges and parks, what would they think of the bad taste “decorations” the city hall is erecting nowadays as art and, ironically, as a Christmas gift for the citizens?

Impressed by the energy of the Indian prime minister, American president Obama plans of starting to do yoga