The ideal of non-violence AHIMSA 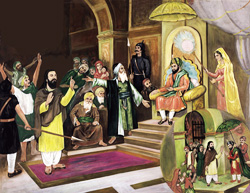 A very poor man went through to a grove. He was very hungry. The grove was full of mango trees and it was clearly the fruit season. So tempting were the ripe fruit that the hungry man instinctively sought a stone and threw it into a tree. Two fruits  fell on the ground. The man’s face was lit up with joy, and his hands grabbed the fruit with emotion, while his mouth was salivating in abundance.
Glad that he had acquired the fruit and could ease his hunger, the poor man did not even think about what happened to the stone after he had brought down the fruits. He had thrown the stone with the increased power given by his hunger, which took it high and very far in the sky before it fell.
Destiny, the creator of strange situations, conspired in such a way that brought together the poorest man and the king of the country on the same day and in the same grove. The poor man, starving, was trying to ease his hunger. The great monarch, after a royal lunch, was looking for the cool shade of the trees in order to spend his time playing chess with his consorts and ministers. The monarch and the desperate hungry man knew nothing of each other’s existence.
The stone which put down the fruits was inert, devoid of human feelings: it could not avoid, out of respect, the monarch. It hit him right in the head. A turban protected the king’s head, but and it was snatched and tossed away. The monarch, absorbed in a pleasant game with his consorts, didn’t even think to investigate the cause of the sad fate of the turban. But the subjects couldn’t bare the alleged insult against the king. They searched for the perpetrator and found the poor man greedily eating the delicious fruit.
The servants wanted to see the most severe royal punishment applied, thinking even that for someone who had insulted the king’s person so severely the most appropriate punishment would be the capital one. The Minister of Justice called for a trial court immediately and the poor man was sentenced to death because he attacked the King.
The king had just finished his game when the Minister of Justice announced to him that the villain was harshly punished for his deed.
“Bring him here!”, demanded his Majesty. The poor man was immediately brought before the King.
“Why did you throw the stone?”
“To get a mango fruit!”
“So you casted it towards a tree?”
“Yes, your Majesty!”
“Did you get the fruit?”
“Yes, your Majesty!”
“Did you eat the fruit?”
“Yes, your Majesty!”
The king returned to the Minister of Justice and told him: “The poor man was starving and threw a stone in the tree. He put down a fruit and ate it. Tell me now, for how long has he eased his hunger? “
“For about 24 hours, your Majesty.”
“It’s good. Now we will pronounce the royal sentence. “
The crowd of subjects was waiting breathtakingly. Could anything be worse than the judge’s sentence?
“We order that starting with today until the end of his days on Earth, this poor man is to receive from our treasury sufficient wealth to live acceptably. Communicate this decision to the Minister of Finance. “
All were astonished. What kind of punishment was that?
The Queen believed that this “punishment” was due to her because she brought the king in a light and pleasant disposition, so that the poor man was handsomely rewarded. She was smiling significantly and with complicity.
“My darling”, asked the king, “tell me, is the tree, a sentient being or an insentient object?”
“Of course, an insentient object, your Majesty!”
“And myself?”
“What a question, your Highness! The man, the crowning of creation is a sentient being. You are a gem among the people. You are truly divine. Who has surpassed you in knowledge and wisdom? “
“Then, my beloved, it is just that me, a sentient being, to prove at least as worthy of this status given to me by God as it was proved by this insentient tree, right?”
“It is just, my master; you have shown to be more illustrious than all the people in deeds and wisdom. But why are you asking me all these?”
“Here is why: the poor man hit the tree with a stone. It gave him back a savory fruit to feed himself. Hunger was eased for a day. The stone hit me then. Iis it only natural to prove more magnanimous than a tree? This is the reason for which I have commanded for this man to be given as much as he needs for his whole life.”
The ministers, the servants and the queen fell on their knees at monarch’s feet and kissed the dust honoring him.
“Master, you are truly divine on this earth. In these times, only a truly divine person and God Himself would manifest so much compassion! This virtue brings you closer to the divine Buddha and Jesus, the son of God, placing yourself among saints and sages of all time! May you be praised! May the wise and abundant ruling of our master last for many years on this earth! Because only such leaders can teach and inspire the devotees to cultivate compassion, divine love and tolerance. Inspired by your glorious example, people will love each other, will serve each other and so, with clean hearts, will turn into divine beings. Bless us, master, to become thy true servants! “