Awareness in the meditation process

We recommend that you also read the previous article, Awarenes during PRANAYAMA techniques and its applications to daily life 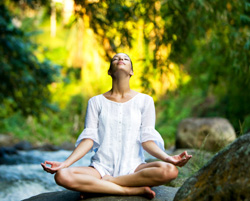 In the previous article we approached the subject of becoming aware of the respiratory process in PRANAYAMA techniques and we pointed out its importance with the purpose of obtaining a connection with the very source of life, through the accumulation of the vital primordial energy, PRANA. When this occurs, a certain state of self confidence arises in one’s being, a state of mental serenity and depth.

After this stage we will begin taking note of the activity of our mind and what happens beyond our thoughts, then we will deepen the meditative states and, while remaining in complete silence, we will have access to superior knowledge, through the awakening of the supra-mental consciousness.

The famous treaty Vijnana Bhairava Tantra, written in the form of a dialogue between SHIVA and his beloved consort SHAKTI, presents a wide array of techniques for spiritual enlightenment, some of these being based upon the process of becoming aware of the respiratory process. In Osho’s comments to one of these techniques, he describes the way in which this should be done in order to lead us to the revelation of our primordial nature.

“When the energy touches your nostrils, feel it there. Then let it enter. Be with it, fully aware. When you enter with it, do not lose it. Do not rush ahead and do not fall behind, go with it.  Breathing and consciousness must become one. When the energy enters, you enter. Only then will it be possible to reach the point between two breaths. Move together with the PRANA on the inside, move with it on the outside.

If you’ll keep on practicing this technique of becoming aware of your breath, suddenly, one day, without even knowing, you’ll reach that interval. Because the more profound your consciousness will become, the more awake and solid it will be – the whole world will be bleaker, blander; your world is just the inspiration and the expiration, it is the arena of your consciousness – suddenly, you will feel that hiatus where there is no breath. 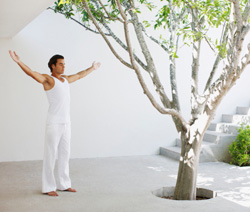 When you move attentively, in synchronicity with your breath, how could you ever remain unconscious? You will suddenly become aware of the fact that there is no breathing there, and a time will come when you will feel that no breath comes in, no breath comes out. It ceased completely. In that break you can become fully aware of your divine nature.”

First, it will be rather difficult for us to sense that break between the breathing out and breathing in; most of the times, we are under the impression that the two phases of breathing follow one after another endlessly. But when we focus our attention on breathing, without changing it, just observing it, we will notice that both the breathing in and the breathing out slow their pace, they become lighter and slower and then we’ll be able to perceive that hiatus between them, that moment of going back from the outside and going inside and vice versa. That’s the point where the mind calms down, the consciousness focuses inside the being and touches the center. In that point, the respiratory processes are united and the creation occurs.

To be aware means to be an observer

Observing all the events that occur within us and around us with great attention, lucidity and detachment, we will become more and more aware of ourselves and the surrounding reality. Our ability of being aware will increase more and more, it will get more refined, we will be able to seize more and more profound aspects, more subtle aspects, we’ll be able to go beyond appearances and to master a wider area of our sphere of our consciousness, which will expand further more. 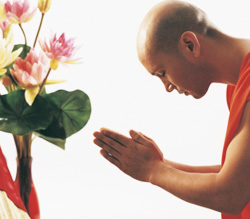 Usually, when we are paying attention to something of the outer world, we are actually referring to one of the sense: sight, hearing, smelling, touching or tasting. But the real attention consists of a perception with all the five senses, and a complete stillness, with no mental fluctuation to disturb our inner silence. This is the moment when we can consider ourselves true observers. If someone tells us about the beauty of a flower and its perfume, we can notice these details, indeed, but that doesn’t mean we’ve actually felt that flower properly. We’ve only noticed certain specific aspects of it.

Truly becoming aware of the flower actually means that we stop our mind, we leave ourselves to be absorbed by that flower, with all its characteristics, as a whole. And then the field of our consciousness will change, the mind will stop, the body will be still and nothing outside of that flower will no longer exist. This is a very special state which is also very difficult to reach.

Then you can no longer say that there’s just you and the flower, because you’re becoming one with the flower, your consciousness has absorbed the flower and became one with it. This analogy can extend to the human beings we think we know. But we will never truly know someone unless we haven’t incorporated them entirely in our consciousness.

Thus, being truly focused on something also means stopping our mind from playing and focusing it on one thing. For this to happen, an assiduous practice is required, because the mind is just like a monkey restlessly jumping from one tree to another. Can you even resist three whole minutes without thinking of something? This is difficult exercise, but many will say: “Yes, I can.” But after a few seconds, you’ll notice that there’s images unfolding before your eyes, or some thoughts just passing through your mind, thoughts about what you’ll do after this experiment, or some thoughts about what happened just a few minutes ago.

Are we the body? Are we the emotions? Are we the mind? Or the soul? Are we a divine immortal spirit, a spark of God, the Father? The depth of our direct conscious experience is what determines the answer and not our conscious mind, based on ideas or concepts. 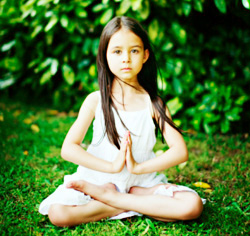 Most of the times, attention is selective, and the process of becoming aware is more complex, more comprising. It manifests in a field which is generated on the object to be perceived. That’s where the attention is heading. If you focus on your breathing, then you’ll not only become aware of the act of breathing, but also of the complex processes that take place during breathing: the air going through the nostrils, the presence of the subtle energies along with the air, the body posture, etc. You will be able to awaken your consciousness and to increase your ability of expanding it, while focusing your attention on the “third eye”, AJNA CHAKRA.

After a while, this state begins to stabilize and you will become a lucid observer of the occurring thoughts and ideas – they will occur less and less often in the end. The passing of the mental agitation will draw a state of complete silence and relaxation with itself. In this state of silence, with no thoughts to disturb it, you will be able to have access to the Supra-mental realm.

The energy which is specific to this realm is of a more subtle nature, it is pure and highly elevated. Sri Aurobindo said: “The world in which we’re living is an empire of the senses, in which the divine essence of our soul, the real Self was forgotten by most people. We are like actors on the great stage of life, actors who stopped listening to the directions of the Director, actors who identify themselves with their parts completely, and therefore they can no longer remember who they really are. The Tower of Babel is no longer a metaphor, but an image of day to day reality. If we want to transcend the great show of cosmic illusion, we must also be detached observers. The mind becomes silent when observing attentively. Only then, the TRANSFORMATION can begin…”

Read here the fourth part of the article

Easter – The Celebration of Resurrection, divine miracle, light and love

Khajuraho: the temples of love

In Romania, a man disappeared before the eyes of his family and traveled 200 hundred…