The slyness of the Kalergi Plan: the Genocide of the Peoples of Europe 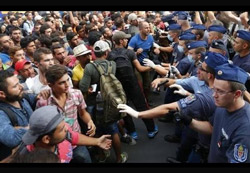 Mass immigration is a phenomenon the causes of which are still cleverly designed by the system and that the multicultural propaganda is trying to portray as inevitable. But in fact, it is not a spontaneous phenomenon. What they want to present as an inevitable outcome of history is actually a plan conceived around a table and prepared for decades, to completely destroy the face of the Old Continent.

Few people know that one of the main initiators of the process of European integration was also the man who designed the genocide plan of the peoples of  Europe. It is a dark character, whose existence is unknown to the masses but the elite considers him as the founder of the European Union. His name is Richard Coudenhove Kalergi. By moving behind the scenes, away from the glare of publicity, he managed to attract the most important heads of state, making them supporters and promoters for the project of European integration.[1]

In 1922,Richard Coudenhove Kalergi founded the Pan Europe movement in Vienna, which aimed to create a New World Order based on a Federation of Nations led by the United States. European integration would be the first step in creating a single world government.

With the rise of Fascism in Europe, the project was abandoned and the Pan-European union was forced to dissolve, but after the Second World War, Kalergi, thanks to a frantic and tireless activity, as well as the support of Winston Churchill, the Masonic Lodge B’nai B’rith and major newspapers such as The New York Times, the plan managed to be accepted by the US Government.

The Essence of The Kalergi Plan 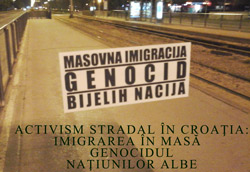 In his book, Praktischer Idealismus („Practical Idealism”), Kalergi indicates that the residents of the future “United States of Europe” will not be the original people of the Old Continent, but a kind of bestial sub-humans products of miscegenation. He clearly states that the peoples of Europe should interbreed with Asian and coloured races, thus creating a multiethnic flock with no quality and easily controlled by the ruling elite.

Here’s how Gerd Honsik describes the essence of the Kalergi plan:
”Kalergi proclaims the abolition of the right of self-determination and, subsequently, the elimination of nations by means of ethnic separatist movements or mass immigration. In order for Europe to be controlled by an elite, he wants to turn people into one homogeneous mixed breed of Whites, Blacks and Asians. He credits these mestizos with cruelty, infidelity and other traits that, according to him, must be created consciously because they are essential to achieve the superiority of the elite.

By eliminating first democracy, namely the government of the people, and then the people itself through miscegenation, the white race will have to be replaced by an easily controllable mestizo race. By abolishing the principle of equality of all before the law and by avoiding any criticism of minorities with special laws to protect them, it will be easy  to suppress the masses.

Politicians of that time agreed with Kalergi, the Western powers entrusted his plan and banks, the press and the American intelligence financed his projects. The leaders of European politics are aware  that he is the author of the Europe that starts from Brussels. Kalergi, unknown to the public, is considered,by historians and among deputies, the father of the Treaty of Maastricht and of multiculturalism.

The novelty of his plan is not to accept genocide as a means to gain power, but to claim the creation of subhuman beings and due to their negative traits, such as incapacity and instability, to ensure tolerance and acceptance of the «noble race».” [3] 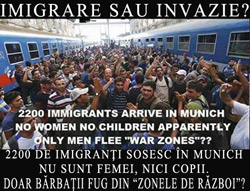 Although no history textbook mentions Kalergi, his ideas were the guiding principles of the European Union of today. The belief that the peoples of Europe should be mixed with Africans and Asians to destroy our identity and create a single mestizo race, is the basis of all community policies that aim to integrate and protect minorities.

It is not about humanitarian principles, but guidelines issued with a ruthless determination to achieve the greatest genocide in history.
In his honor was established the Coudenhove-Kalergi European prize, which is awarded every two years to ”Europeanists” who have excelled in promoting his criminal plan. Among those awarded with such a prize are Angela Merkel (German Chancellor) and Herman Van Rompuy (the first permanent president of the European Council).

The incitement to genocide is also the basis of the constant appeals of the United Nations demanding that we accept millions of immigrants to help with the low birth rates of the EU. According to a report published at the beginning of the new millennium, on January 2000, in Population Division of the United Nations, under the title Immigration Replacement: A solution to declining and aging population, Europe would need by 2025 159, 000 000 immigrants. One could wonder how is it possible to express such accuracy on the estimates of immigration if it was not a premeditated plan.

It is certain that the low birth rate could easily be  reversed with appropriate measures to support families. It is just as clear that the contribution of foreign genes does not protect the genetic heritage of Europe, but  it enables its disappearance. The sole purpose of these measures is to completely distort our peoples, to turn them into a group of individuals without ethnic, historical and cultural cohesion.

In short, the policies of the Kalergi plan was and still is the basis of official government policies, aiming at the genocide of the Peoples of Europe through mass immigration.

G. Brock Chisholm, former director of the World Health Organization (WHO), proves that he  has learned the lesson of Kalergi well when he says:
“What people in all places have to do is to limit birthrates and promote mixed marriages (between different races), this aims to create a single race in a world which will be directed by a central authority”.[4] 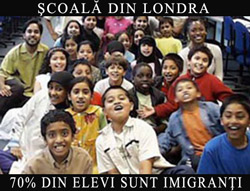 If we look around us, the Kalergi plan seems to be fully realized. We are facing a loss of value to Europe. The axiom of “New Civilization” supported by promoters of multicultural mentality represents their adherence to forced national intermingling. Europeans are shipwrecked in miscegenation,  flooded with waves of African and Asian immigrants.The plague of interracial marriages produces each year thousands of young people of mixed race: “The children of Kalergi”. Under the dual pressures of misinformation and humanitarian stupefaction, promoted by mass media, the Europeans are being taught to give up their origin, to give up their national identity.

The servants of Globalization are trying to convince us that to deny our identity is a progressive and humanitarian act, that “racism” is wrong, because they want  all of us to be blind consumers. It is necessary, now more than ever, to counter the lies of the System, to oppose a forced uniformity. We have no other option, the alternative is national suicide.

NOTES
[1] Among the first descendants are Czech politicians Masarik and Benes and also banker Max Warburg who provided Kalergi with the first 60 000 marks for his project. Austrian Chancellor, Monsignor Ignaz Seipel and the next austrian president Karl Renner assumed responsibility for leading the Pan- European movement. Kallergi himself announced that other French politicians approved  his movement to suppress a German revenge movement. Thus, French Prime Minister Édouard Herriot and his government,  as also British leaders from all political sectors, and editor-in-chief Noel Baker of Times fell under the spell of this conspirator. Eventually, he managed to attract even Winston Churchill on his side. The same year, that later was to become the year of the genocide of 300 000 Sudeten Germans by the Czech, Edvard Benes was appointed honorary president. So far, he had completely ignored Kalergi’s existence, but was negotiating with Mussolini to restrict the rights of Austrians to self-determination in order to favour mostly the victorious peoples, at which he failed.

From the long list of senior politicians of the twentieth century, should be mentioned especially Konrad Adenauer, former Spanish Minister of Justice, Rivers and John Foster Dulles (USA).Without  respecting the foundations of democracy and with the help of The New York Times and New York Herald Tribune, Kalergi submitted his plans to the American Congress. His contempt for the principle of popular governments was stated in a phrase in 1966, when he recalled his post-war period activities: “The following 5 years of the Pan-European movement were dedicated especially to this goal: mobilizing parliaments, forcing governments to build Pan-Europe”. With the help of Robert Schuman, the French Foreign Minister, Kalergi succeeded to rob Germany its reign over its steel, iron and coal production and put it in charge of a supranational that is anti-democratic sovereignity. Kalergi pretended to want to establish peace between the French and German peoples through the heirs of Clemenceau, who devised the genocidal plan of Versailles.

In the twenties, he determines the colour blue for the flag of the European Union.
The leading role of Kalergi in the creation of a multicultural Europe and the restriction of executive power of parliaments and governments  is evident to this day and is expressed in the “Coudenhove-Kalergi Prize” granted to Chancellor Helmut Kohl, thanking him for following the plan. Also, Free Mason and powerful European politician Jean-Claude Juncker Prime Minister of Luxembourg was flattered with this prize.

In 1928 he joined the famous politicians and French Masons: Leon Blum (who later became Prime Minister), Aristide Briand, EM Herriot, Loucheur. Among his associates were other names as well, such as writer Thomas Mann and the son of the Kaiser, Otto von Habsburg. Among the promoters of the Kalergi plan, apart from the already mentioned, there were Churchill, the CIA, the Masonic lodge B’nai B’rith, The New York Times and the entire American press.

Kalergi was the first to be awarded the Charlemagne prize in the city of Aachen.
When Konrad Adenauer was granted this prize, Kalergi was present. During 1966, he maintained contact with his most important collaborators. All those who have been awarded this prize were part of the circle of friends of Kalergi and were Free Masons or endeavored to represent US interests in Germany. In 1948, Kalergi managed to convert the congress of the European Parliamentary Union (EPU) of Interlaken into a tool, to force governments to deal with the “European Issue”, i.e., to carry out his plan. Just then, the European Council  was created, the leader of the German delegation being Konrad Adenauer, supported by the CIA. (Gerd Honsik, Stop the Kalergi Plan)