The walls of Bimini or the relics of Atlantis 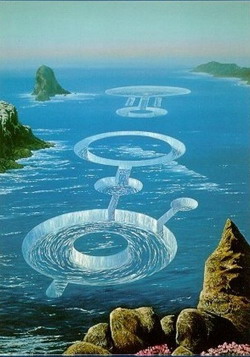 “Nassau (The Bahamas Islands): Strange archaeological formations have been identified lately in the proximity of Bimini islands. After the first information received, it seems there is a giant wall; specialists could not determine the moment in time when it was erected and who built it. Underwater investigation continue.”

These words were published by the United Press agency in the spring of 1970 and at that time they informed the world about the research of a group of American scientists. They were conducting a series of investigations for a few years, in Bimini, a small island in the Bahamas archipelago located 150km from Florida.

Upon this discovery, the scientific world split into two groups of researchers – some of them were immediately interested and others – the skeptics denounced the discoveries as mere mystifications. A conflict of opinion was created and it still exists to this day.

Everything began two years before this announcement, when the American pilot Robert Brush, while surveying the area during a routine flight, saw a massive rectangular shape sunken into the sea, just North of the Andros islands. She even took pictures of that formation. Then she showed the photographs to a professor from Yale University – Manson Valentine, who was known as a specialist in pre-Columbian civilizations at the Science Museum in Miami, Florida. He also told his friend about this, Dimitri Rebikoff, a specialist in underwater photography and the inventor of the electronic light flash. The three of them surveyed the area in a hydroplane and they discovered that the structure, which was sunken a little under the water level, was a construction that was nearly buried under the sand at the bottom of the sea – more precisely, a wall that was about 30 cm thick which seemed to serve as a foundation for a remarkable edifice. This lower part was the only one left standing from the whole foundation.

Into the underwater… plane 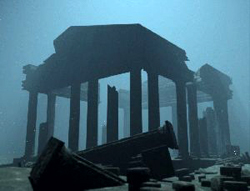 This discovery attracted ample research operations around the Bahamas archipelago. During the same year – 1968 – Rebikoff gave the research team a machine he invented himself, an apparatus called REMORA M114 E, which can be described as a genuine underwater… airplane, with automatic cameras that can film in a wide angle (920). Being prepared for prolonged research, they decided to concentrate their efforts on a new discovery: a different sunken structure, which was discovered in the northern part of the Bimini archipelago.

Thus there were many expeditions who came one after the other, with countless American researchers; even Edgar Mitchell, the astronaut, took part in one of them. The team led by Valentine and Rebikoff began to progress in late 1968. The scientists located a foundation which was 70m long and 10m wide that seems to be built on large regular blocks tied together in some sort of cement. Rebikoff said that these blocks vary in size, but their approximate dimensions are 5m long and wide and somewhere between 0.5 and 1.5m high, weighing approximately 25 tons.

“The surface of this wall is well-trimmed”, said Rebikoff, “with a good horizontal on the upper part, which indicates a solid construction”. After this discovery, the team came back to studying the “mysterious wall of Bimini”.

The photographs show the structure of a wall measuring 70m in length and 10m in width called the eastern wall. To the west, there is a different structure which is 500m long and 10m wide. In April 1971, a few perforations done by the researchers underneath the eastern wall have allowed them to discover a layer of rocks glued to the other layer with 6m of cement. The inner faces of the stone blocks have marks on them which resemble the marks left by construction machines.

Archeologists were surprised to see that the walls were able to stand the test of time, resisting waves and hurricanes during all those years. They have come to the conclusion that the solidity of the construction is due to the attention and the competence of their builders.

A new expedition has discovered upon removing the sand that the upper part was supported by four pillars. At that point, the archeologists had no doubt – they were standing before an extraordinary construction done by people.

The nature of the discoveries allows them to assume this is an ancient sunken harbor. On the other hand, these blocks are similar to the amazing constructions in Mexico. We find the same regular blocks in Teotihuacan, in the Sun Pyramid in Tiahuanaco, near Lake Titicaca or in Machu Picchu.

Another report of the geologists at the University in Miami was revealed to the public on the 25th of February 1971 and this report agitated those who were reluctant regarding the walls of Bimini even more. From this report we find out that these constructions were build out of stone blocks that had nothing in common, from a geological perspective, with the natural formations in that area. Their conclusion was staggering: this wall had definitely been built by someone, using materials that were impossible to be found in that place.

The archeological dispute had reached its climax. There were many publications who stated in all seriousness that man had played absolutely no part in erecting the walls discovered in the Bimini archipelago. Others said that, on the contrary, we find ourselves before a great human edifice. The investigations that followed have strengthened the belief that the structure was built by man.
Thus it was discovered that the wall was part of a monumental harbor structure – with a pier which was 600m long. The perfect alignment of the blocks, the gigantic rock slabs supported by pillars, as well as the perfect parallelism of the wall’s edges confirmed the fact that this was a man-made structure. A French specialist, Pierre Carnac, sustains these conclusions by firmly stating in his book, “History begins in Bimini”: “this pillar construction style reminds us of the piers of the old Mediterranean harbors built by the Phoenicians. The empty spaces between the pillars were meant to reduce strong winds. The pier of the Byblos harbor is constructed in this manner”.

Afterwards, many scientific organizations became interested in this mystery: the University of Miami (Dr. Emiliani Guinzburg), the Museum of Juarez (Mexico – Don Pablo Busch Romero), the Museum of Man in Paris (dr. Lehmann), the Laboratory for dynamic geology of the University of Science in Paris (Harou Tazielf), the International Congress of Marine Archeology, etc. In the end, the hypothesis of a potential rocky natural formation was unanimously rejected.

There are still many mysteries left unsolved. When were the walls built? Judging by the underwater biology, it’s possible that these monumental structures were erected in the 7th-8th millennia BC. C14 estimates indicate an age of 10 000 years. But who could have built these imposing sculptures in an age during which man was incapable of building such constructions in Europe?

Nobody was able to find an answer up to this day. But the importance of the underwater artifact discovered all around the Bahamas (in a region where sunken temples and pyramids were also discovered) has determined Dimitri Rebikoff to write: “We must accept that, 10 000 years ago, the Bahamas islands formed a gigantic plateau above the water on which maybe millions of people lived. We draw this conclusion after researching the many discovered artifacts. For now, we know nothing of this civilization. So the problem is archeological, not geological. We must keep on digging in order to find the keys of this extraordinary enigma.” 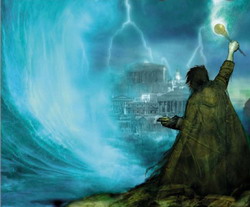 What catastrophe could have led to the sinking of the Bimini structures and other similar constructions? Undoubtedly, it was a high scale cataclysm. This is confirmed by a recent discovery – after measurements conducted with the 16 or 18 oxygen isotopes contained in the sediments of the Gulf of Mexico, which is halfway between Florida and the Mississippi river delta, scientists came up with the theory of a flood that took place 11 600 years ago.

According to Dr. Emiliani from the University of Miami, the air masses caused the rise of the waters of the planetary ocean with 7 to 10m, which led to the sinking of certain areas. This reminds of legends of sunken countries, civilizations wiped off the face of Earth by great cataclysms: the Mu continent, Lemuria, the Gondwana continent, Atlantis… Scientists often said it was situated off the coast of Florida, where the walls of Bimini were found. Atlantis is presumed to have disappeared in the same time period when the great cataclysm in the Gulf of Mexico occurred.

We must mention here that the famous American clairvoyant Edgar Cayce, also known as “The Sleeping Nostradamus”, due to his amazing prophecies and disclosures about the past, which he used to reveal while in a state of hypnotic sleep, had said in 1940 that Atlantis will be rediscovered in Bimini, somewhere around 1968 – 1969. He said: “Poseidon (a region of Atlantis) will be one of the first parts of Atlantis to rise back to the surface.”

But then World War II came and Cayce’s believers had more urgent things to deal with. And yet, the discovery of the sunken walls caused new discussions regarding the Cayce’s prophecy. Is the structure of Bimini a remnant of one of the greatest discovery of our time, the fabulous continent of Atlantis? Judging by the results of later research, the hypothesis is true. Thus, the famous continent seems to be less and less a myth and more a reality.

To discover, first, one must believe. If Schliemann hadn’t believed this story written by Homer, Troy would have never seen daylight. In the same way, Arthur Evans brought the Cretan civilization to surface by using the writings of Herodotus. Atlantis left traces in Satori, the Cretan Islands, the Acore Islands and in Bimini. The flood – which came after the last ice age – was able to cause the disappearance of the inhabitants of Atlantis or their exodus towards other continents.

Legends that speak of them have survived in many peoples’ traditions. Some of them – survivors or perhaps explorers – have found refuge among the Mayans, Cretans and the old civilizations of the Andes. The indigenous peoples from many civilizations talk about white gods coming from the sea. Perhaps their common origin is Atlantis.

Thus, we discover similar characteristics in the murals at Chichen Itza, Tiahuanaco and the primitive sculptures of Sicily alongside the columns of Corsica, megaliths, the tombs of HalSalfieni – Malta, as well as the sunken structures of Bimini.

Traditions and research always leads to the same time, approximately 11 000 years ago. But the mystery remains. There are many aspects of our own history and even our own existence that need to be clarified. We must admit that there have been prosperous, rich, superior civilizations on Earth that we still don’t know. These civilizations have left their messages carved in stone, that is, in what was once known as the Royal Art – Architecture. A noble art which proves man’s transience. One of the keys to this mystery probably lies in Bimini.

A Mexican drug cartel protected by the CIA

Meditations, favorable astrological conjunctures and spiritual events for May 2015