The legend of the fire lingam

According to the LINGODBHAVAMURTHY story in the LINGA PURANA, at one point, VISHNU and BRAHMA started comparing their strength, in order to see who of them is stronger. Then SHIVA appeared in the form of a pillar of light and challenged the two to measure the gigantic lingam that was formed. VISHNU and BRAHMA agreed that the first one who will find its end will be considered the best. VISHNU assumed the form of a boar and looked down and BRAHMA flew up, in the form of a swan. The two looked for many days in vain, but in the end they returned exhausted from where they started. Then, the middle of the pillar of light opened and the Lord SHIVA emerged in all His Glory. Then, BRAHMA and VISHNU realized that they were mistaken and they acknowledged SHIVA as the Supreme Being. 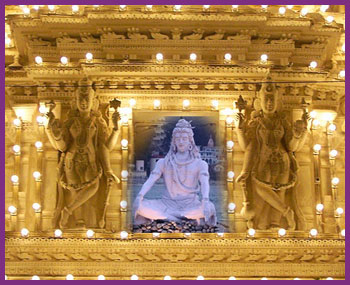 Jyotir means in Sanskrit “brilliant body of light”. In the Hindu tradition, the  jyotirlinga temples are associated with the occurrence of the Supreme SHIVA in the form of a pillar of fire. They say that advanced yogis can see enormous pillars of light rising towards the sky in the place of the consecrated altars in these temples.
In the writings of Indian spirituality, there are certain testimonials on the construction of these first  jyotirlinga sanctuaries, beginning with TRETA YUGA – the second spiritual age of humanity, which comes after SATYA YUGA and before DVAPARA YUGA. There is a total of four spiritual ages, the last of them is KALI YUGA. Mankind is now in the final times of this fourth age. 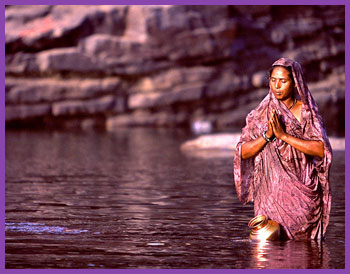 The twelve altars of the fire lingam were venerated all across India from the most ancient of times. There’s some more detail on them in the DWADASA JYOTIRLINGA STOTRA of the SHIVA PURANA. Each of them is associated to a temple.

“These are the jyotirlinga of Lord SHIVA. If their names will be repeated every morning and every evening with devotion, this will consume all the sins from the last seven lives of the aspirant, granting him with all the siddhis. The aspirant will then rest at the feet of Lord SHIVA himself.” SHIVA STOTRA PURANA 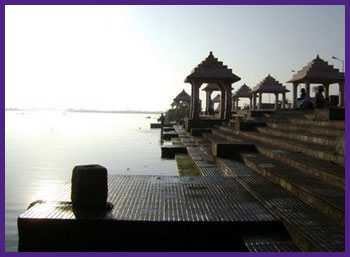 The glory and wealth of the Somnath temple was described by the Arabic traveler Al Biruni. His testimonies attracted Mahmud Ghazini into the Gujarat region, who robbed and destroyed the temple in the year 1025. The holy edifice was rebuilt, then destroyed again for five times during the centuries. This caused it to be entitled “The Eternal Altar”.
Considered to be one of the most revered centers of pilgrimage across India, it is thought that Somnath is the first of the twelve jyotirlinga of SHIVA.

In SKANDA PURANA and MAHABHARATA we can find certain references on this  jyotirlinga. Legend says that due to his father in law, Daksha’s envy, the god of the moon named Chandra was cursed to gradually lose all his brilliance. Then, Chandra together with his favorite Rohini have worshiped the lingam at Somnath, and SHIVA blessed the celestial body to shine during the bright part of the month. 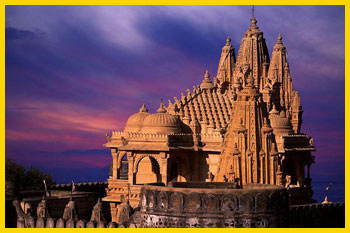 Placed in most northern part of India of all the twelve jyotirlinga, the Kedarnath temple can be found in the Badrinath region, close to Rishikesh. The ancient altar at Kedarnath has a profound religious meaning, the great sage Shankaracharya was strongly related to this holy edifice in the Himalayas.

Legend says that the five Pandava brothers have worshiped SHIVA at this altar. Arjuna, the hero prince in BHAGAVAD GITA has prayed here for SHIVA to give him the invincible weapon. Then Shiva appeared in his aspect of KIRAATA (hunter) and challenged the prince to fight him, the trophy being a wild boar. During the fight, the Great SHIVA, disguised as a hunter, removed all of Arjuna’s weapons, including his ego. The Prince continued his fight bare handed and SHIVA then showed him his true nature and gave Arjuna the blessing of the invincible weapon. 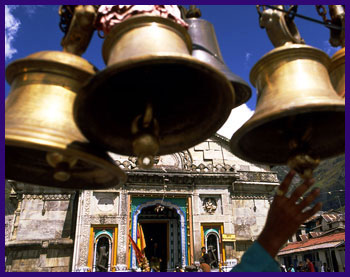 Situated in the Madhya Pradesh region, in the center of India, in the ancient town of Ujjain, the jyotirlinga sanctuary of Mahakaleswar was built next to a lake. They say that the offerings that are brought in this place receive an answer from SHIVA extremely fast.

Skanda Purana describes the glory of the Ujjain citadel in detail, the capital of the Avanti kingdom. Legends say that a demon named Dushana tormented the inhabitants of the region. They prayed to SHIVA who emerged from the ground and banished the demon. Upon the request of the worshipers, the Supreme MAHESHWAR set his holy residence here permanently, in the form of the jyotirlinga. 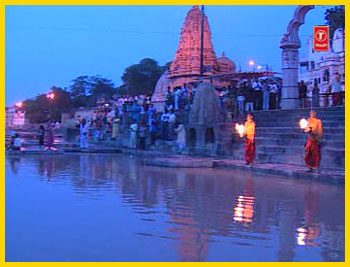 This is considered to be one of the most important Shivaist altars in the whole of India. MALLIKARJUNA (SHIVA) and BHRAMARAMBA (his consort) are worshiped here. SKANDA PURANA contains an entire chapter dedicated to this holy edifice, which also represents one of the most wonderful examples of Vijayanagar architecture.

The Sri Sailam temple was worshiped in the last thousand years by the sacred poets of the region Tamil. They say that the great religious Hindu leader Shankaracharya (788-820) wrote here his famous work SHIVANANDA LAHARI.
Legend says that DURGA took the form of a bee, he chose the temple as his residence and there he worshiped SHIVA. 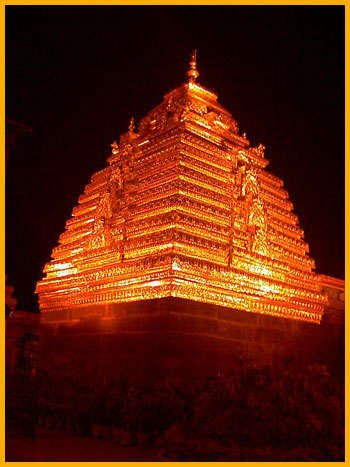 Even though the structure of the temple dates from around the year 1750, the altar was mentioned in the thirteenth century literature. According to the writings of SHIVA PURANA, jyotirlinga Bhimashankaram is located in the Brahmapur mountains.
The temple is located on top of the Sahayadri hills, providing a wide view on the fort, the rivers and the surrounding mountains.
Bhimashankaram is closely related to the legend of SHIVA, the one who killed the demon Tripurasura. It is said that SHIVA took, upon the gods’ request, the form of BHIMA, and his sweat from the fight against the terrible demon formed the river of Bhimarathi. 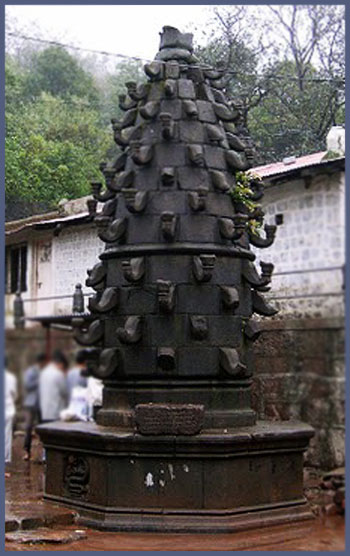 6. The Vishwanath temple of Varanasi

Benares, the city on the bank of the Gange river, was considered from ancient times to be a center of pilgrimage. Even today it is regarded as the holiest settlement in India, the residence of SHIVA himself.

It is said that this place is most pleasurable to GOD, hence the name of ANANDAKANANA. The city is also named KAASI, because they think that the Supreme Brilliance of GOD shines here, enlightening the believers’ path to deliverance.
The VISHWANATH temple was destroyed, then rebuilt for several times along the ages. The jyotirlinga worshiped here is visited by millions of pilgrims each year. 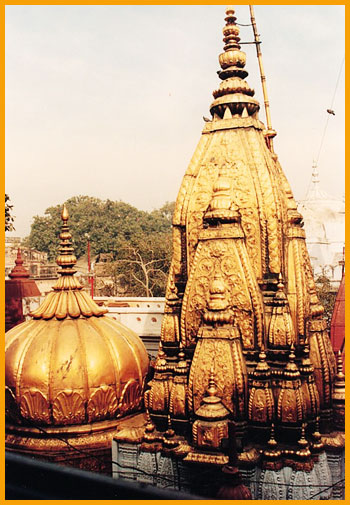 This temple is located in Madhya Pradesh, on the bank of the river Narmada which splits into two, forming an island which is resembling the visual representation of the sacred sound OM (AUM).

Legend says that mount Vindhya prayed to SHIVA OMKARESHWAR in this place and received his blessing.
Upon the gods’ request, SHIVALINGA split into two, one of them becoming the altar at Omkareshwar, and the other forming the jyotirlinga of the Amareshwar temple nearby. 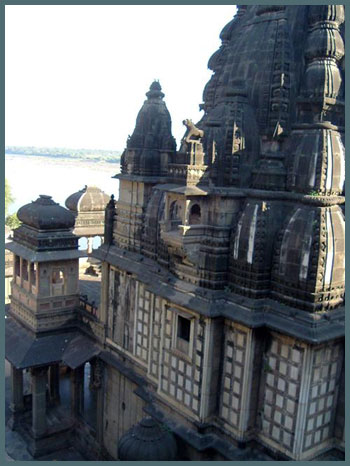 Situated in the Bihar region, the Vaidyanath jyotirlinga altar is controversial among the philosophical Hindu schools who attribute several locations to it.
Vaidyanath is also considered to be a SHAKTI PITTHA sanctuary (an altar where the feminine counterpart of SHIVA is worshiped).
Legend says that Ravana meditated upon SHIVA, asking him to make his stronghold invincible. He wanted to rise the mount of Kailash, but SHIVA, upon seeing this, crushed him with His finger. Then Ravana begged for forgiveness and thus SHIVA gave him one of the twelve jyotirlinga. 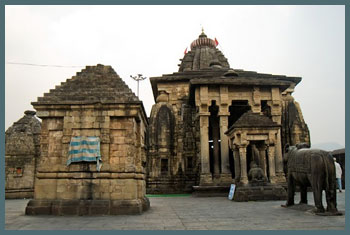 Situated in Western India, 30 kilometers away from the city of Nasik, the jyotirlinga altar at Tryambakeshwar is ancient. His structure was rebuilt in the eighteenth century. We can find some references of Tryambakeshwar in the PADMA PURANA.
Legends talk about the holy Gautama, who prayed in this region to SHIVA in order to bring the GANGE river forth to purify the surroundings. The holy water then emerged, in the form of the Godavari river and SHIVA set his residence here in the form of TRYAMBAKA (the one with three eyes).

All the gods said they will descend into this blessed region, once every twelve years, when the planet Jupiter was in the sign of the Leo. 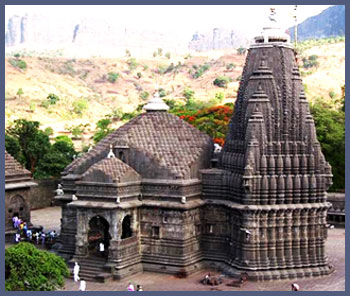 Situated in Dwarka, the region of Gujarat, JYOTIRLINGA Nageshwar is mentioned in the RUDRA SAMHITA. The altar is known by the name of NAGESHWAR MAHADEV (The Lord of the Snakes), being visited by thousands of believers each year. They say this famous jyotirlinga offers protection against any kind of poison.

According to the treaty SHIVA PURANA, a devout of MAHESHWAR named Supriya, was attacked and taken as prisoner together with other people by the demon Daaruka. SHIVA then appeared in his form of a pillar of light and saved them. 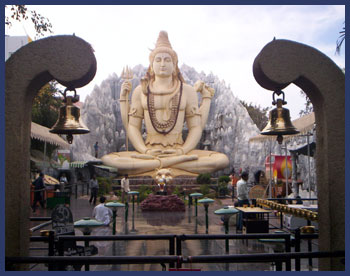 The jyotirlinga altar at Grishneshwar is an ancient place of pilgrimage. It is situated near the famous Ajanta Ellora caves. The temple is also known under other names, such as Kusumeswarar or Grushmeswara.

The legend of SHIVA PURANA says that in these sacred places, there was a woman from the class of the Brahmans who lived here and her name was Kushuma. She venerated SHIVA a great deal. Her sister became jealous of her and she killed her son.  Kushuma kept on doing her daily rituals towards SHIVA, and MAHESHWAR, seeing his devotion, gave back her son’s life. Then she asked SHIVA that He forgave her sister. The Supreme Master was moved by Kushuma’s generosity, thus He appeared before all the inhabitants of this region as jyotirlinga. 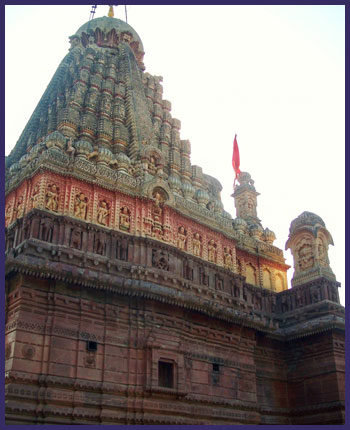 This temple dedicated to SHIVA is most southern of all the twelve jyotirlinga. Rameshwaram is built on an island in the south east of the Tamil Nadu region, being associated with the RAMAYANA and with the glorious return of RAMA from Sri Lanka. The holy edifice is renowned for its towers and for its extremely long, beautiful and richly decorated corridors.
Legends say of how RAMA worshiped SHIVA in this altar and since then, the jyotirlinga here is entitled RAMALINGA, and the city where the temple can be found is called Rameshwaram. 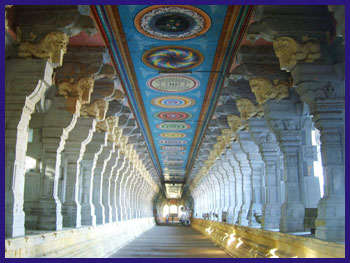 The statistics of organ donors. A typical case of manipulation that should get all of us thinking

Photo Report. Book Launch: «The Secret Tantric Path of Love to Happiness and…