Ex-US Foreign Service Officer: US Acting as ‘ISIS Air Force’ in Syria Based on a ‘False Flag’ 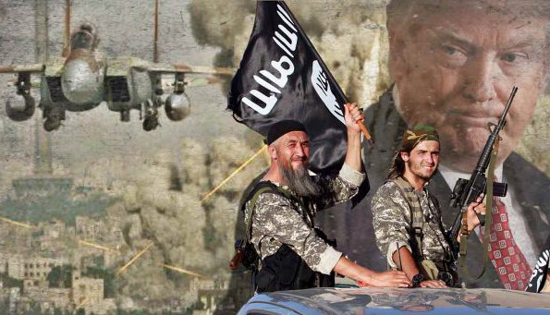 A former US official, critical of the strikes on Syria, is pointing out that the US is acting as the air force for ISIS. Adding credence to the claim is the report that terrorist groups inside Syria coordinated attacks with the US-led strikes.

The United States, France and the UK engaged in limited missile strikes against civilian and military targets in Syria on April 14, resulting in the immediate benefit of terrorist groups operating inside the country. The bombing without any investigation has prompted widespread bipartisan backlash from all political sects.

The United States is “acting as air force of all these jihadist terrorist [groups] – Al-Qaeda, ISIS, Jaysh al-Islam and Ahrar al-Sham” former U.S. foreign service officer Jim Jatras told RT, adding that “it’s really morally reprehensible”.
What’s more, Al Masdar News reported that ISIS and forces mounted offensives in coordination with the western missile strikes: “The Islamic State (ISIS) attempted to take advantage of the US-led attack on Syria in order to capture new areas inside the southern districts of Damascus. However, this offensive would be short-lived, as the Syrian Arab Army (SAA) and their Palestinian allies were able to beat back the encroaching terrorists. According to a military source in Damascus, the Islamic State had attempt to catch the Syrian Army off guard with the attack, but were completely overwhelmed by the latter’s manpower and firepower. The Syrian Arab Army is now preparing to launch an offensive in southern Damascus alongside their Palestinian allies. The goal of this southern Damascus offensive is to capture all of the areas currently controlled by the Islamic State.”

Additionally, Jatras said: “preventing a real investigation in Douma was one of the reasons for [the strike]” as it prevented chemical inspectors from the UN’s Organization for the Prohibition of Chemical Weapons (OPCW), on the ground in Damascus, from reaching the site of the alleged chemical attack.
Only hours before inspectors from the OPCW was scheduled to visit Douma – to determine if chemical weapons had been used – the missile strikes began.
“So, the big hurry here is, in my opinion, is that you’ve got [OPCW] inspectors on the ground in Damascus ready to go now and confirm… there wasn’t any attack” said Jatras.

The former U.S. diplomat made note that “if you’re Al-Qaeda or its offshoot [in Syria], you’re going to be very happy tonight” labeling the alleged chemical attack in Douma a “false flag” operation, and explaining that false flag operations “work, especially when you have compliant media”.
The “compliant media” dynamic has been seen at work in both legacy mass media and social media, with an ongoing censorship operation targeting dissent on numerous social media platforms under the guise of getting rid of “fake news”.

Furthermore, Jatras said that he expected US President Donald Trump to respond to the Douma incident in a similar to last year (2017) after the alleged gas attack in Khan Sheikhoun that was blamed by the west on the Assad government – but which MIT expert Theodore Postol disputed in highly critical report of the US assessment that blamed the Syrian government.
At that time, Postol, a leading weapons academic, and one of the foremost experts in the field, came forward in a series of reports noting his opposition to the official story in regards to the Khan Sheikhoun nerve agent attack in Syria, claiming that the Syrian gas attack in Khan Sheikoun was staged.

“I don’t think that Syria has chemical weapons. I think that the Russian effort to get them out of there after what happened in Ghouta in 2013 was genuine and was certified as genuine by the OPCW”, Jatras said. In regards to the U.S. justification for the strikes, he said “it’s a conscious transparent lie”.

Russia has claimed they possess “irrefutable” data that reveals the incident in Douma was staged by British intelligence services pushing a “Russophobic campaign”, Russian Foreign Minister Sergey Lavrov stated.
“We have irrefutable evidence that it was another staging, and the special services of a state which is in the forefront of the Russophobic campaign had a hand in the staging”, Lavrov said at a news conference with his Dutch counterpart Stef Blok in April. 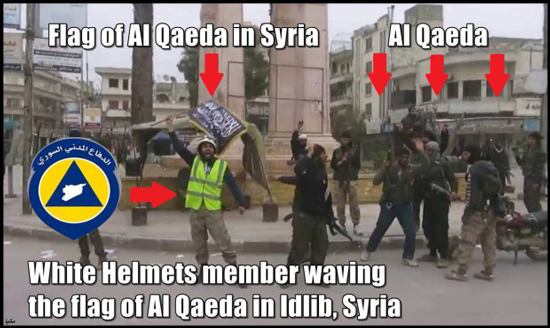 In addition, the Russian Ministry of Defense presented what it claims is evidence that the alleged chemical weapons attack in Syria was a staged false flag event, and accused the British government of pressuring the perpetrators to speed up the “provocation”.
“The Russian Defense Ministry also has evidence that Britain had a direct involvement in arranging this provocation in Eastern Ghouta”, the general added, referring to the neighborhood of which Douma is part. “We know for certain that between April 3 and April 6 the so-called White Helmets were seriously pressured from London to speed up the provocation that they were preparing.”

During a briefing, the Russian Ministry of Defense released interviews with two men who it claimed are medical professionals working in the only hospital operating in Douma. “Please, notice. These people do not hide their names. These are not some faceless claims on the social media by anonymous activists. They took part in taking that footage” said ministry spokesman Major-General Igor Konashenkov.
The two men explained how footage, widely distributed among western media, was shot of people dousing each other with water, which was purported to show the aftermath of the alleged April 7 chemical weapons attack in Douma.

According to a report by RT: “According to Konashenkov, the group, which was a primary source of photos and footage of the purported chemical attack, was informed of a large-scale artillery attack on Damascus planned by the Islamist group Army of Islam, which controlled Douma at the time. The White Helmets were ordered to arrange the provocation after retaliatory strikes by the Syrian government forces, which the shelling was certain to lead to, he said.”

The U.S. Department of Defense said that the option to strike the Syrian government would remain should Assad use chemical weapons again, thus providing terrorist groups the ability to stage false flag attacks at any time in an effort to provide themselves with western air support – which Trump has proven is sure to follow – without any evidence.

While France and the US have claimed they have evidence, the actual evidence they are referring to is open source, which is nothing more than reports from White Helmets and video garnered from social media and media inputs. The reality is that this is not evidence, its fabricated propaganda meant for public consumption – in hopes of garnering public support for another U.S. regime change operation under the guise of humanitarianism.

The Anunnaki and Planet X: The Nibiru Cataclysm