FACEBOOK: A CIA-controlled Social Network Run By A Boy Tyrant

There is no other social network that has proven to be such a transparent CIA operation like Facebook. From its earliest beginnings there was something very wrong with this obvious data-mining enterprise.

One of its founders and current leader Mark Zuckerberg fits the profile perfectly for a young and immature techie who would be made dictator of the global Facebook empire… only if he followed every directive from the C.I.A.

There is no major news corporation within the Mainstream Media (MSM) that has not been completely taken over by the C.I.A. The Central Intelligence Agency is tasked with the ‘essential’ responsibility of controlling the type and flow of all information disseminated by the MSM throughout the USA. This is their most important function since the ‘wrong’ information disseminated at the ‘wrong’ time can literally bring down the U.S. Federal Government.

For instance, were the C.I.A. to permit the primary organs of the MSM propaganda machine to feature a true story on Obama’s fake and forged birth certificate copy, his Administration would have collapsed in a day and a night. Hence, the C.I.A. signs off on every story of great import. Because of the raw power of social network utilities to quickly viralize any story these days, websites like Facebook had to fall under the full control of the C.I.A.

After all, a story that takes off on Facebook can be read millions of times in a very short period. Which is why Facebook‘s Mark Zuckerberg is totally unashamed to appear as the veritable control freak that he truly is. Every move that Zuckerberg and COO (Chief Operating Officer) Sheryl Sandberg make with their social network is made at the direction of the C.I.A. – without exception.

Now the reader understands why Zuckerberg is currently the 5th richest person in the world with an estimated net worth of $53.9 billion. How does a young punk like Zuckerberg go from being a college dropout who screwed his Facebook collaborators out of their respective stakes to such heights, except by CIA design?

Just as significantly, how did Google (who doesn’t know by now that gmail is short for government email?) executive Sheryl Sandberg go from being considered for a senior executive position at The Washington Post one day to Facebook COO the next? Bear in mind that the WaPo is the nation’s premier CIA-owned and operated MSM news outlet. In other words, Jeff Bezos doesn’t really own the The Washington Post, except on meaningless paper. He is also a CIA operative ever since he started Amazon.com.

Without this critical understanding – that every major MSM news platform is CIA – nothing makes sense. With this very basic understanding, everything makes sense.
Within the context of comprehensive intelligence gathering, what could possibly be more important for The Company – as the C.I.A. is known throughout intelligence circles – than to have complete control of the predominant global disseminator of information on the planet: the MSM organs of propaganda and fake news?

From 2017 and beyond, it has become even more necessary for the CIA to clamp down on all media, both mainstream and alternative, because of the recent proliferation of earth-shaking truth which now issues forth from the alternative media. Never in modern history has the MSM lost control of the daily narrative that so many people worldwide are exposed to. As a matter of fact, the outcome of the 2016 U.S. presidential election was determined by this unprecedented loss of control by the C.I.A.

For this and many other reasons, the CIA, NSA and DIA have been tasked with the explicit responsibility of grabbing complete control over all media, particularly the social networks. Facebook, then, is their first priority because of its pervasiveness and power around the globe. In light of the role that Facebook played in determining the outcome of the election, Zuckerberg et al. are literally going berserk to lock it down like never before. As previously mentioned, the CIA is nothing but a group of “out-of-control freaks”. And Zuckerberg is their front man. 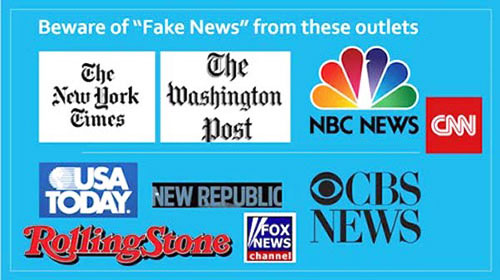 There is perhaps no greater attempt by the establishment to kill the competition than the transparent fabrication of the ‘fake news’ meme. Truly, the C.I.A. has revealed their utter desperation by ordering the WaPo and The New York Times, CNN and MSNBC, as well as other MSM flagships to disseminate such a bogus accusation. Such a desperate attempt to essentially terminate the alternative media will surely backfire, but not before inflicting serious damage on the MSM news platforms that are used by the C.I.A. to float the ludicrous meme.

In this regard Facebook has been chosen to be one of the primary government gatekeepers, so influential has it become in the regular dissemination of real news by the Alternative Right. Facebook have even become the self-appointed (read: CIA-appointed) arbiter of fake news. Such a lofty (and impossible) position will certainly expose Facebook as the CIA censor it was originally created to be.

With his golden comp package and other golden handcuffs and golden parachute firmly in place, what won’t Czar Zuckerberg do except strictly follow the dictates of the KGB-like CIA down to the very last details. These co-conspirators all know that the very future of the planetary civilization is at stake; for whoever controls the media really does control the world.

Which brings us back to ‘fake news’ and how crucial this CIA-coordinated psyop is to purging the planet of every truth-telling platform in sight. There simply is no room for the loud and cacophonous MSM organs of propaganda and the clear and mellifluous violins of alternative media truth in the same global orchestra of media.

The MSM cannot tolerate the exposure of their relentless stream of really fake news. In fact, the mainstream courses with nothing but fake news – 24/7. The very existence of an alternative media can’t help but reveal the MSM’s profound and incessant betrayal of the public trust through the publication of so much fake news and false information.

There are now a variety of alternative social networks which are making themselves known. Some are CIA cutouts, others are the real deal. Discriminating between the two can be quite challenging. However, there are some basic litmus tests which can be applied with confidence. Closely comparing different social networks according to certain key criteria is a very good place to start in any event.

For example Seen.life provides an excellent social network platform that permits the discussion of some of the most sensitive and radioactive issues of the days. Any social network (SN) that provides a protected space for topics like Pizzagate cannot be owned and operated by the CIA. Pizzagate is as radioactive as it gets and certainly poses a dire threat to the world power structure; therefore, it acts as an effective litmus test of authenticity. No, not necessarily foolproof, but pretty good.

The essential issues here concerns privacy and content. Does the SN provide adequate safeguards for privacy and use of posted information? Does the SN create space for the discussion of some of the most weighty subjects of our times? Are the pages and posts, forums and chat rooms so censored that alternative media truth is removed as quickly as it is replaced with MSM fake news?

If a social network does not measure up to the most basic journalistic standards, why even go there? That the phony Snopes is being used to fact check news stories posted on Facebook is as Kafkaesque as it gets; so why bother using such a censored social network?

At the end of the day, it is the 5th Estate (socio-cultural reference to groupings of outlier viewpoints in contemporary society, most associated with bloggers, journalists publishing in non-mainstream media outlets and the social media) that will prove to be the guarantor of truth and justice, if there is to be any found anywhere on Planet Earth in the future. The present condition of 4th Estate (mainstream media) is such that it is now comfortably in bed with the other three (clergy, nobility, and commoners). Their mutually enriching relationships are now so incestuous that CNN is commonly referred to as the Clinton News Network. Likewise, the Obama Administration practically employed the MSM to function as the White House Press Secretary (i.e. the White House press corp now works for the POTUS – President of the United States).

Given the current climate, there can be only one resolution. The alternative media must grow and develop their own social networks free from all government control… free from all censorship… and free from all unlawful interference. Such social network platforms offer an exceptional opportunity to leave the CIA reservation, once and for all.

The bottom line here is that whoever owns the media controls the message that everyone receives. Hence, the only way to receive and send the most vital messages of our era is to disengage from the MSM and re-engage with genuine alternative media platforms like Seen.life. Our continued success in the alternative media greatly depends on it.

10 unknown natural aphrodisiacs that will make you passionate