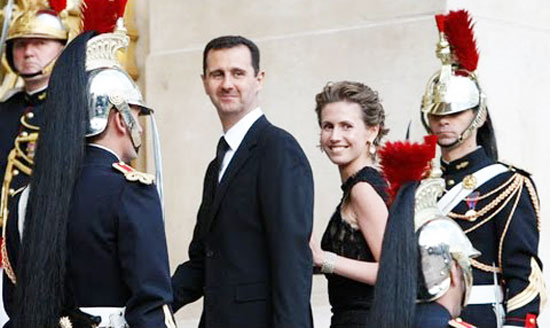 The Assad family belongs to the tolerant Islam of Alawid orientation.

Syrian women have the same rights as men to study, health and education.

Syrian women are not forced to wear the burqa. The Sharia (Islamic law) is unconstitutional.

Syria is the only Arab country with a secular Constitution and does not tolerate Islamic extremist movements.

Roughly 10% of the Syrian population belongs to one of the many Christian denominations, all fully integrated in Syrian political and social life. In other Arab countries the Christian population is less than 1% due to sustained hostility.

Syria has banned genetically modified (GMO) seeds, stating his decision was made in order “to preserve human health”.

Syria has an opening to Western society and culture like no other Arab country.

Its media and universities openly debate the global power elite’s influence in things. This means that they fully grasp the fact that real power in the West lies not in the White House but rather with the complex and powerful grid of elite think-tanks and central banks.

Throughout history there have been five popes of Syrian origin. Religious tolerance is unique in the area.

Prior to the current civil war, Syria was one of the only peaceful countries in the area, having avoided major wars or internal conflicts.

Syria was the only country that admitted Iraqi refugees without any social, political or religious discrimination.

Syria clearly and unequivocally opposes Zionism and the Israel government.
Following a massive oil find in Syria’s Golan Heights, occupied by Israel since 1967, Netanyahu asked US (during the Obama Presidency) to recognize its annexation of the territory. To consolidate its hold, plans are afoot to quadruple Israeli settler numbers to 100,000.

And The Most Two Important Points:

Syria is one of the very few countries in the Middle East without debts to the International Monetary Fund (pre-invasion Libya and Iran were the others).

Syria is the only Mediterranean country which remains the owner of its oil company, with an oil reserve of 2,500 million barrels, the operation of which has avoided privatization and is reserved exclusively for state-owned enterprises.

So now ask yourself, why are the US truly attempting to overthrow yet another government?

What are US hoping to fix here?

If the recent invasions and illegal assassinations of Presidents like Gaddafi and Saddam have taught us anything, it should be the understanding of the blowback effect of such lawless actions by the West and the vacuum of chaos that always supersedes it.

Debt Conquer: Invent a reason to invade and destroy, then offer trillions of dollars in IMF funding to rebuild… conveniently paid back by control of your oil fields and the free access to build gas pipelines to the west.

A French delegation to Syria, led by politician Thierry Mariani was targeted by the US backed FSA (Free Syrian Army) Company 23. Aleppo airport was shelled by this group of primarily US supported “moderate rebels” led by a defected Syrian Arab Army colonel, Hassan Rajoob, just prior to the planned take off of the plane ferrying the delegation back to Damascus.

The delegation then met with Syrian President, Bashar Al Assad, on the January 9, 2017. Following the meeting, President Assad met with and fielded questions from French media. Here is an excerpt from his statement:

“The question now, after six years, as a French citizen, do you feel safer? I don’t think the answer is yes. The immigration problem, has it made the situation in your country better? […]

If I want to send (a message to French politicians) I would say the self evident thing, that we have to work for the interests of the Syrian citizens, and for the last years the situation is going in the opposite direction. The French politics harmed the French interests.

For the French people, I would say the mainstream media has failed in most of the west, the narrative has been debunked because of the reality and you have the alternative media, you have to look for the truth.

Truth was the main victim of the events in the Middle East, including Syria.