Father Sets Himself on Fire to Protest Pedophile Elite 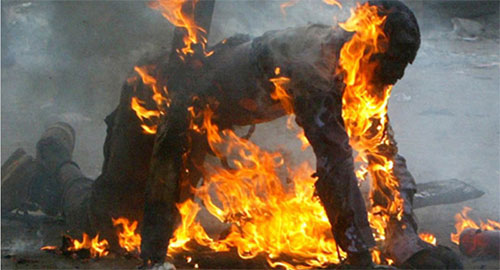 The father set himself alight to protest against the pedophile elite

A man has set himself on fire outside of the New Zealand Parliament building to protest against the pedophile elite.

The father set himself ablaze to make a stance against pedophilia and child abuse in the country’s Family Court.
The incident happened outside the government building in Wellington where the man had left a placard on the steps of Parliament House that were also burned in the fire.
The sign read: “Enough taking mothers children away and murdering father’s children”

According to Stuff, a Wellington Free Ambulance spokesman said the man was taken to Wellington Hospital’s emergency department in a “status one” condition.
The hospital confirmed on Thursday night the man was being treated and remained in critical condition.

Police placed a cordon around a burnt patch of grass, about a metre in diameter, on the lawn outside Parliament House.
A foreign reporter, who did not want to be named, witnessed the incident and said it was unlike anything they had seen before. “I turned around and there was a man in flames on the lawn … we didn’t know it was a person, to begin with,” she said.
“We were yelling for help. We didn’t know what the emergency number was … a man came over with his jacket and tried to beat the flame out.” Another man who witnessed the incident said other people in the area were “just standing around” at first.
“There was no reaction from people around so it took a little while to realize what was going on.”

Another man, who saw the incident, said he initially thought the smoke was coming from within Parliament before emergency services doused the flaming man in water.

Senior Sergeant Glen Turner, of Wellington Police, said they were called to a fire outside Parliament grounds about 3.50pm. “When police got here there was a small fire, which had subsequently been put out,” he said. “We’re treating the scene as a crime scene, which is procedure. There are a number of inquiries that need to be done.”

It was also too early to say whether any accelerant was used. Police were yet to establish the man’s identity. They were trying to piece together who he was and what his movements were before the fire, Turner said.

“Things like this are highly unusual and extremely unfortunate.” Security footage from Parliament grounds would be used in the investigation, he said. 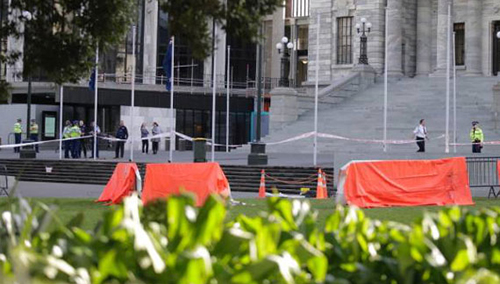 MWNZ reports: It was author Greg Hallett who first claimed that the NZ Family Court is run by pedophiles, for pedophiles.
Many of the Kiwi fathers affected would probably argue they should all be rounded up and burned at the stake. In fact, many do on Facebook.
How would you feel if your kids were kidnapped off you by the largest known pedophile ring in New Zealand: the NZ Government?

Anyone worth a grain of salt would go to war. Allegations were previously reported that kids are even being kidnapped to order by Child Youth and Family (now called the Ministry for Vulnerable Children, to help cover up their previous serial pedophilia), often then pimped out to pedophile families involved in organised pedophile rings, with the same NZ judges giving them all name suppression if caught, and the senior masonic NZ police covering up allegations of organized ‘elite’ pedophile rings as well.

Breaking/Treason: Nuclear First Strike on America, It will be Israel