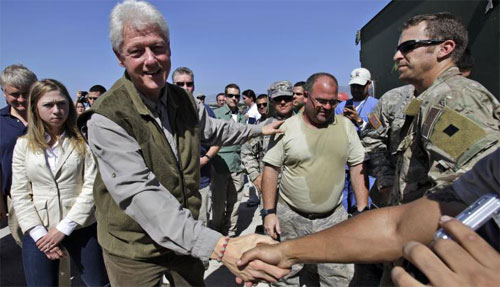 Former president and U.N. special envoy for Haiti, Bill Clinton, second from left, shakes hands with soldiers of the Joint Task Force-Haiti in Port-au-Prince, Monday, Jan. 18, 2010. Clinton promised that his foundation would provide medicine and a generator to the capital’s General Hospital in order to support doctors there work through the night. At left, Clinton’s daughter Chelsea Clinton.
An eyewitness to the Clinton Foundation’s corrupt dealings in Haiti says virtually nothing has been done to help the victims of the 2010 earthquake in Haiti that claimed an estimated 200,000 lives, and that the Clintons are nothing but common thieves who should be in jail.

Sandy Rios of American Family Radio interviewed former Haitian Senate President Bernard Sansaricq, and the enraged Haitian had nothing good to say about the Clintons. He angrily claimed that they brought their “pay to play” politics to Haiti at the expense of the Haitian people.

It is now known, thanks to WikiLeaks, that the State Department colluded with the Clinton Foundation to make sure that those multi-million dollar contracts would literally go to “friends of Bill”.

Email exchanges show Clinton Foundation officials in the hours after the massive earthquake reaching out to a senior aide to then-Secretary of State Hillary Clinton, who “repeatedly gave special attention to those identified by the abbreviations ‘FOB’ (friends of Bill Clinton) or ‘WJC VIPs’ (William Jefferson Clinton VIPs).” 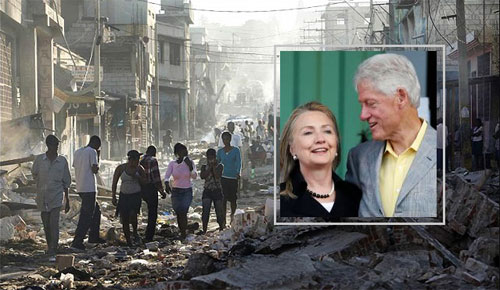 “Need you to flag when people are friends of WJC” wrote Caitlin Klevorick, then a senior State Department official who was juggling incoming offers of assistance being funneled to the State Department by the Clinton Foundation. “Most I can probably ID but not all.”

“They are nothing but common thieves”, the enraged Sansaricq told Rios. “And they should be in jail.”

Sansaricq said although Bill Clinton was put in charge of the reconstruction, he did absolutely nothing but give contracts to his cronies and built a sweatshop next to a goldmine that was given to Hillary Clinton’s brother, Anthony Rodham, in violation of the Haitian Constitution.

He said he could go on for hours about the Clinton Foundation’s destruction of the rice production in Haiti because they were importing rice from Clinton’s cronies in Arkansas. And rice is something Haiti could really use right now.

The Clintons also awarded the country’s only cell phone company to another crony, Denis O’Brien, using taxpayer dollars. O’Brien has made 265 million dollars, and a substantial portion of that has gone back to the Clinton Foundation.

A Korean garment company is another Clinton Foundation “success story”. It was supposed to provide 60,000 jobs, but it has only provided about 5,000 jobs because it is located too far away to help the people in need. Top Hillary Clinton aide Cheryl Mills, he said, is also involved with this project. He says the company was awarded the contract because it is a donor to the Clinton Foundation.

Sansaricq pointed out that some of the 14.3 billion dollars the Clinton Foundation was given to rebuild the country after the 2010 earthquake could have been put toward building hurricane-proof infrastructure. But the Clintons only enriched themselves and did nothing to help the victims – and then the body count for Hurricane Matthew has gone up to over 1,000 people and millions of homes have been destroyed in Haiti.

The Haitian official said that Bill Clinton became a power broker in Haiti in 1994 when he invaded the country to restore democracy. “He wanted to have power in Haiti even after his presidency” Sansaricq said.

Sansaricq further claimed that after he became the president of the Senate, then President Clinton tried to “buy him out” and “make him the richest man in Haiti”. He says he told Clinton he was not for sale. After that, his US visa was revoked by a Clinton executive order.

Amazing Things Can Happen When You Give up Sugar. Here’s How to Do It