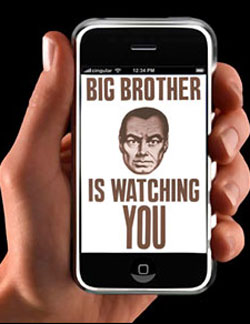 Millions of Americans bow down to their smart phone, tweeting, typing and texting their politics, social grievances, emotional explosions, insecurities, purchases, investments, health concerns, musical tastes, children’s photos, travels, food cravings, collaborations, loves, hates and just about anything else imaginable. Most users know, and may not care, that the data they share is quickly sold to high tech marketers looking to make a buck by offering the user hyper-personalized products. But do you want the CIA tracking you as well?

As reported by the alternative media, WikiLeaks has produced proof of the CIA’s ability to “identify and exploit vulnerabilities for the purpose of secretly collecting data on individuals” from “85% of the world’s smart phones”. The common link among these devices is that they run on the Android operating system by Google. Samsung phones and Sony phones are among those mentioned, along with certain social messaging apps like Clockman, Weibo and WhatsApp.

What’s even more chilling is a report by The Intercept which documented that the National Security Agency (NSA) targets those they want to eliminate through “cell-phone tracking technologies”. In other words, after the NSA locates the SIM card, the CIA or the U.S. military sends in the drone to kill the person holding that phone.

So how can you stop being monitored and block the signals from your smart phone? It’s amazingly simple. Mylar, best defined as a “strong polyester film” that can be used for insulation and storage bags, plays an important role in attaining your privacy. It’s used in three of these four strategies:

1. Mylar bags from snacks or chips

There are lots of sizes, and these bags are everywhere. You’ll need at least three layers. To avoid the residue salt or crumbs from the food, put your phone in a zip lock bag before placing it in the mylar snack bags. You can put duct tape around all three bags and create a secure pouch.

If you don’t have a few mylar blankets or ponchos in your emergency kit, it’s time to get a few, along with some organic emergency storable food. Mylar ponchos and blankets are small and packable and not too pricey. Buy an extra one and cut it as needed for your smart phone. As before, you’ll need three layers for your bag or pouch.

This will work for your laptop as well. Again, three layers for the devices.

When you find one, it’s important that the rubber gasket is secure.

Before you snuggle your phone into its tracking proof bag, make sure it’s turned on and the volume is up all the way. Wrap it securely, then hold the bag with the phone close to your ear while you call your number from another phone. Only allow 3 rings, don’t let it go to voice mail. If your phone is securely wrapped, you won’t hear a thing. That’s a good sign.

With the mylar protection, or the ammo can, that “continuous signal your cell phone sends out every 4 seconds” is interrupted. With this new protection, you may miss a few calls, but now you have a choice to be tracked, or not.

Alarming: Too Much Sugar in Your Body Can Cause These Terrible Consequences