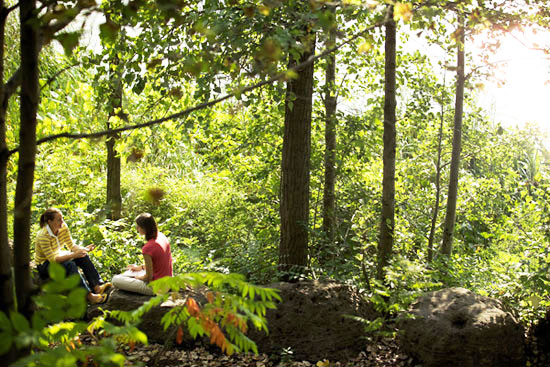 Want to bring out the very best in yourself? Science says spend more time in nature.
Richard Ryan, a professor of psychology and psychiatry at the University of Rochester, believes communing with nature far exceeds the benefits of easing stress and improving health – it also greatly influences our values and overall behavior as we go about our daily lives.

“Stopping to experience our natural surroundings can have social as well as personal benefits,” says Ryan. He adds that exposure to natural surroundings, compared to those of the man-made variety, helps to cultivate stronger ties of community and closer relationships, as well as increasing our generosity with money.

Ryan should know. Along with a team of researchers, he conducted four experiments involving 370 participants who were either exposed to nature or man-made settings. They were instructed to notice colors and textures of the images on 19-inch computer screens, and to imagine the sounds and smells of the environments. For the first three experiments, half the group viewed images of buildings, roads and other cityscapes, while the other half observed natural landscapes like lakes and deserts. Both the urban and nature images were matched for color, layout, lighting and complexity. The fourth study involved participants that either worked in a lab with or without plants.

Once the experiments were completed, the participants answered a questionnaire which rated the importance of four life goals: wealth, fame, connectedness and community.
With all four studies, those exposed to the natural world consistently ranked close relationships and community higher than they had before the experiments. The questionnaire also assessed how deeply engaged the participants were in the images. The deeper the connection to nature, the more they appreciated community and closeness, whereas those who focused more on artificial environments rated wealth and fame higher in importance.

Levels of generosity were also put to the test. Two of the studies involved giving participants a $5 prize, which they could either keep or give to another anonymous participant, who would then be gifted an additional $5 bill. In turn, the anonymous participant could decide to return the prize money or keep it. In short, the first person had little reason to trust the second participant and also risked losing the money altogether.

Interestingly, those who were in contact with nature were more willing to share the money. And the more they were immersed in the natural environment, the better chance they would be generous with their winnings.
Why? Because nature helps us connect with our true, authentic selves, says study co-author Andrew Przybylski. An example is how the participants who focused on landscapes and plants said they felt a heightened sense of personal autonomy, such as “Right now, I feel like I can be myself.” 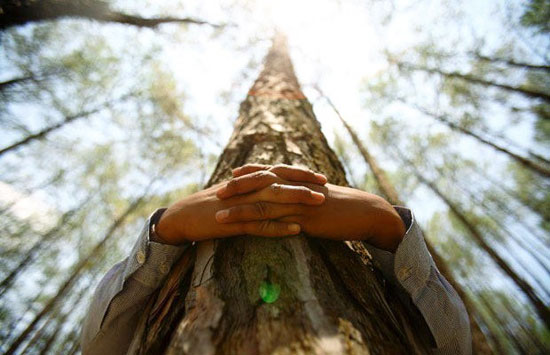 Przybylski believes humans are essentially communal by nature, since we evolved in a hunter and gatherer social structure that depended on cooperation for survival. Natural surroundings also encourage introspection as we are removed from the distractions and pressures of man-made environments. “Nature in a way strips away the artifices of society that alienate us from one another,” he says.

Lead author Netta Weinstein adds that the results of the study show the importance of creating green spaces in urban environments. She points out that parks and other natural spaces in cities could very well help create a stronger sense of community for its residents. The opposite is also true. “To the extent that our links with nature are disrupted, we may also lose some connection with each other,” the authors note.
“We are influenced by our environment in ways that we are not aware of,” Weinstein stresses. Therefore, we should take advantage of the natural world as much as possible, whether surrounding ourselves with plants, natural objects and images, or spending time in the great outdoors, “The more you appreciate nature, the more you can benefit,” she says.

A perfect way to bring more nature into your life is through the Japanese art of Shinrin Yoku – otherwise known as forest bathing.

Not only will spending time in nature help support your highest values and most positive behavior, it will dramatically improve your health as well. When we immerse our senses in the beauty of nature mindfully – in other words, we drop the inner and outer chatter and actually pay attention to our environment – we reduce stress and encourage relaxation. This we know. However, time in nature also gives a substantial boost to our natural killer (NK) cell activity, which in turn keeps cancer cells in check.

Qing Li, Senior Assistant Professor at Nippon Medical School in Tokyo, is considered an expert on the benefits of forest bathing. Here’s what he found: “In two studies, small groups of men and women respectively were assessed before and after a two-night/three day forest bathing trip. During the trips the subjects went on three forest walks and stayed in a hotel in the forest. Blood tests were taken before and after the trip, revealing a significant boost in NK activity in the subjects in both groups. The increase was observed as long as 30 days after the trip. Follow-up studies showed a significant increase in NK activity was also achieved after a day-trip to a forest, with the increase observed for seven days after the trip.”

Moreover, Dr. Li tested the effects of forest bathing on our emotional and mental states. A series of questions were given to the participants, which rated how mildly or strongly they experienced emotions like sadness, happiness, friendliness and consideration for others, among others. After a week, the researchers found that those who forest bathed reported higher levels of vitality and lower levels of sadness, anxiety and hostility.

With all the terrific benefits of spending time in nature, what’s not to love?