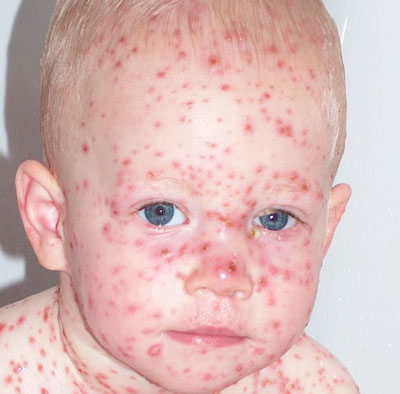 In the past, chickenpox was no big deal. Kids were put in oatmeal baths to avoid scratching and scarring. Although it can make a child feel miserable for a few days, symptoms are often mild and far from life-threatening.

Some people, backed by vaccine-pushing doctors and misinformed parents, still believe immunizing against an illness that has mild symptoms is a must to protect their child. Think about it, most of us had chickenpox as a kid without any long-term issues. For the majority of healthy kids, chickenpox is a rather unpleasant itchy illness and a nuisance for the parents who have to take time off work to look after their sick child.

So why is there such a big push to vaccinate children today? Though chickenpox is highly contagious and may cause serious complications on rare occasions, does that mean we must expose all kids to brain and health damaging chemicals that are far more dangerous than the chickenpox itself?

As a parent, we all want the best for our little one. What better way to push vaccines onto children than to scare their parents with horrific stories, highlighting the few rare cases where things didn’t turn out well?

Creating fear to make sure you vaccinate your kids

Chickenpox is a common childhood disease caused by the varicella zoster virus, which is a member of the herpes virus family and associated with herpes zoster that may cause shingles later in life.

In an article run by the Daily Mail Online, a mother of a kidney recipient has slammed anti-vaxxers because her daughter was rushed to the hospital after being exposed to chickenpox. Though the 11-year-old didn’t get sick and nothing happened to her, the media and her mother managed to cause a commotion that put parents who decide against vaccination in a bad light.

In 2008, the little girl from Atlanta had a kidney transplant when she was only two years old, making her highly vulnerable to all infectious diseases, not only chickenpox. Nine years later, Camille Echols, the 34-year-old mother, issued a plea to parents to educate themselves on vaccines after her daughter Ashely was rushed to the emergency department for injections of immunoglobulin after being exposed to the “life-threatening” illness. Now, she blames anti-vaxxers for causing a situation that left her 11-year old in tears while receiving the potentially “life-saving injections” the Daily Mail Online reported.

A clever play of words combined with a child’s tear to put fear in the hearts of other parents. When did chickenpox enter the list of deadly medical emergencies? At which point exactly was the life of this child being threatened? While Echols was sitting in the emergency room watching her daughter cry, she decided to share what happens when diseases that could be eliminated by vaccines are not, she explained to the Daily Mail Online.

“The people choosing to skip vaccinations put children like my daughter at risk. She has been through so much already. And this was avoidable,” her mother said.
But what about the thousands of children that are permanently damaged, or the parents that lost a child due to the toxic ingredients in vaccines? Even for Ashely, vaccines are dangerous yet her mother blames anti-vaxxers for protecting their children.

“She got one varicella vaccine but couldn’t get the second because she was immunosuppressed and instead of developing immunity, she would have contracted the virus,” her mother said.

If the vaccine isn’t working for kids who receive a transplant, it begs the question why she got the vaccine in the first place. Stories like this where they claim that chickenpox is a life-threatening disease will surely help to increase the sales of the chickenpox jab.