How the mind treats «impossible things that couldn’t be happening» 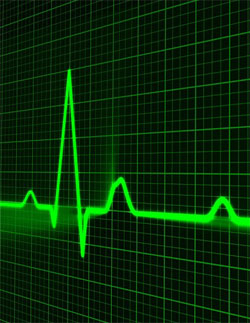 I recently published an article that highlighted the numbers of medically caused deaths in America. When little fragmentary stories about this fact emerge in the mainstream press, they’re one-offs. There is no serious follow-up and no deep investigation. Therefore, the public isn’t aroused.

On May 3, 2016, the Washington Post ran an article detailing deaths from medical errors. This bomb dropped: doctors’ errors account for “about 9.5 percent of all deaths annually in the United States.”

Let that sink in.

Roughly one out of every 10 deaths in the US is caused by medical errors. (Under “errors” you can include a wide range of toxic treatment).

No major newspaper or news network pounds on this factoid day after day. It’s here and then it’s gone. It’s on the level of: “The last seven presidents have been assassinated. And now, here’s the weather.”

Something else is going on, too. I’ll lay it out for you.

Most of the general public, and many reporters, can’t even begin to absorb that medical-death statistic. It bounces off them. They reject it out of hand, misread it, or fail to transport it to the part of their mind where they think about things.

The statistic is virtually invisible to them. “Let’s see, 10% of all deaths in America are caused by the medical system – REJECTED.”

I even had one person tell me ten percent “wasn’t very much”.

I’ve had people change the subject rapidly when I presented them with the statistic.

“Car accidents are terrible. My aunt was in a car crash and she…”

So it isn’t just major media. People are running their own fake news operation on themselves. 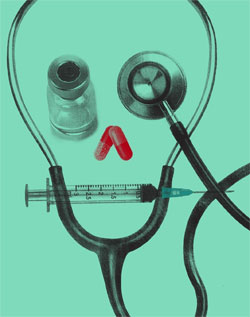 This has been called “cognitive dissonance” or some other fancy name. It’s just the “bounce phenomenon.” A fact bounces off a person. It has no effect.

I’ve dealt with this for more than 30 years as a reporter. I’m in the business of presenting “bounce-able” facts. I’ve seen the full array of reactions, time and time again.

One out of every ten deaths in America is caused by the medical system.

Here is another process that goes on in the mind. It starts this way: „Well, if that were true, then…”

The person starts to think about the boggling fact. He starts to flesh out the implications. And he stops, because the implications are too much. His mental processes and his basic orientation aren’t flexible enough to deal with them.

I’ve been interviewed and watched this happen. The interviewer begins to absorb what I’ve just told him, and he quickly backs away and redirects the conversation, or tries to. I bring him back to the boggling fact. But it’s like trying to drive a faulty car. He just can’t make it. He stalls. His wheels spin, and then he gets out of the car and moves on to something else.

Here is a paraphrase of such an exchange. The interviewer was telling me about the purported effects of a disease he claimed was being caused by a virus. I happened to know the virus had never been isolated from a single human being, so I asked him: “How many deaths would you say occur from the disease, every year in the US?” He puffed up his chest a bit and said, “At least a thousand. It’s terrible.”

I said, “Well, did you know that the medical system is the third leading cause of death in America, behind heart disease and cancer?”

He said, “This virus I’m talking about can spread rapidly…”

Perhaps the most interesting conversation I’ve ever had illustrating the bounce phenomenon occurred at the home of an acquaintance who is a psychologist. I mentioned that every year in the US the medical system kills a minimum of 225,000 people, and then I got part-way into explaining how most people don’t even register the fact when they come across it. 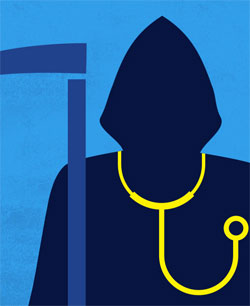 He launched into a major lecture about cognitive dissonance, deploying a few pseudo-technical terms I’d never heard of. I let him go on for a few minutes and then I stopped him. I asked, “Can you remember what I said that started you down this path?”

He scratched his chin, thought about it, and said no.

In his case, the bounce brought on a case of outright amnesia.

Of course, I’ve mentioned medically caused death to doctors. Their comments go something like this: “That couldn’t be true.” “That was just one study.”

Then I say no, there are other confirming studies, and I cite them. At that point the big bounce happens, and they change the subject. Or they look at their watches. Or they walk away.

I’ve found reporters more honest – as long as I’m talking to them off the record, and preferably after a few drinks. One reporter said, “I know. But we can’t write about that. We’d get reamed out.”

I don’t care what journalism schools and editors claim the profession is all about. I know what it’s about. You overturn reality. That’s what you do.

In the process, you reveal there are people who are creating that reality for all of us.

And if that is true, and it is, then each individual is capable of inventing his own reality, a better one.

Along the way, certain facts are going to jump up out of the hopper, that tear conventional thinking and perception to shreds.

Ten percent of all deaths in America are caused by the medical system.

“Wow. That would make it the third leading cause of death. That means the more people who are in the system, the more deaths. The public has to know about this…”

Ah, now we’re on to something.