Most of our political leaders are sponsored by the Illuminati Jewish central banking syndicate. Their pundits and professors obey them unconditionally for the money they receive in return… 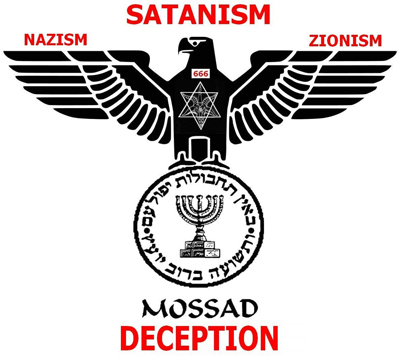 When Winston Churchill was visiting Germany, in 1932, Ernst “Putzi” Hanfstaengl tried to arrange a meeting with Hitler. Hitler apparently declined. It wouldn’t do for two Zionist political actors – future antagonists – to be seen rehearsing together before the show began.

Both Hitler and Churchill were pawns of the Zionist bankers. According to historian Thomas J. O’Keefe, Churchill said in his Memoirs that ex-German Chancellor (1930-1932) Heinrich Brüning revealed the identities of Hitler’s backers in a 1937 letter: “I didn’t, and do not even today for understandable reasons, wish to reveal from October 1928, the two largest regular contributors to the Nazi Party were the general managers of two of the largest Berlin banks, both of Jewish faith and one of them the leader of Zionism in Germany.”

Churchill was funded by a different branch of the same Illuminati Jewish banking syndicate. O’Keefe cites a speech by David Irving on the Focus Group set up by Bernard Waley Cohen, a prominent Zionist banker.

So, 40 times 50,000 pounds – about $2 million in US terms – was given by Bernard Waley Cohen to this secret pressure group of Churchill in July 1936. The purpose was – the tune that Churchill had to play was – fight Germany. Start warning the world about Germany, about Nazi Germany. Churchill, of course, one of our most brilliant orators, a magnificent writer, did precisely that.

For two years, the Focus Group continued to militate, in fact, right through until 1939. And I managed to find the secret files of the Focus, I know the names of all the members. I know all their secrets. I know how much money they were getting, not just from the Focus Group, but from other governments. I use the words ‘other governments’ advisedly because one of my sources of information for my Churchill biography is, in fact, the Chaim Weizmann Papers in the State of Israel.

When Churchill was bankrupted overnight in the American stock market crash of 1937-1938, it was Strakosch who was instrumental in setting up the central banks of South Africa and India, who bought up all Churchill’s debts. When Strakosch died in 1943, the details of his will, published in the London Times, included a bequest of £20,000 to the then Prime Minister, eliminating the entire debt.

Irving dealt with Churchill’s performance as a wartime leader, first as Britain’s First Lord of the Admiralty and then as Prime Minister. The British historian adverted to Churchill’s ‘great military defeat in Norway, which he himself engineered and pioneered’, and mentioned the suspicion of Captain Ralph Edwards, who was on Churchill’s staff at the time, that Churchill had deliberately caused the fiasco to bring down Neville Chamberlain and replace him as prime minister, which subsequently happened.”

“In May 1940, Dunkirk, the biggest Churchill defeat of the lot… Letters between Churchill and the French Prime Minister, Paul Reynaud, revealed the ugly truth that Churchill, himself, gave the secret order to Lord Gort, the British General in command of the British expeditionary force at Dunkirk, ‘Withdraw, fall back’, or as Churchill put it, ‘Advance to the coast’. That was Churchill’s wording.
And you are forbidden to tell any of your neighboring allies that you are pulling out. The French and the Belgians were left in the dark that we were pulling out.”

Of course Hitler quixotically allowed 330,000 British and Allied soldiers to escape at Dunkirk. The Zionist choreographers wanted the Nazis to succeed initially, but not to administer a knockout punch.
The war had to be long and costly both in lucre and in life. Germany had to be completely destroyed and Judeo Communist Russia had to conquer Eastern Europe. Non-Zionist Jews had to be sacrificed so they would dedicate themselves to building the Rothschild fiefdom known as Israel. 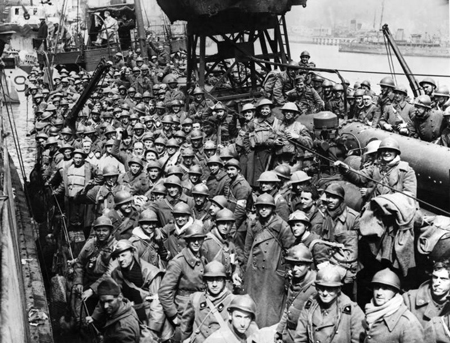 The evacuation of 340,000 Allied soldiers from Dunkirk in 1940 was an ignominious defeat being painted as some kind of victory in a hit movie. The real story is that Hitler let the British army depart because he was a British (i.e. Illuminati Zionist) agent.
If Hitler were really interested in peace with England, he would have taken its army prisoner. That would have forced England to sue for peace. Instead, he allowed Germany to be drawn into a two-front war and be destroyed, which was the goal of his Illuminati Jewish masters.

The “miracle at Dunkirk” is regarded as an extraordinary peace overture to England. We don’t normally associate Hitler with such magnanimity.
In May 1940, the British were on the verge of defeat. The English army was trapped at Dunkirk. Rather than take them prisoners, Hitler halted his generals for three days allowing 340,000 men to escape.
A common explanation is that Hitler didn’t want a world war, and had no stomach for fighting England. According to Pulitzer Prize winning journalist Louis Kilzer, author of Churchill’s Deception (Simon & Schuster, 1994), “Hitler believed the future of Western civilization depended on the cooperation of Germany and her Aryan cousins: England and the United States. His territorial demands were limited to Communist Russia, which he regarded as a proxy for Jewish world ambitions. He was determined to avoid fighting a war on two fronts. ‘The blood of every single Englishman is too valuable to shed’, Hitler said. ‘Our two people belong together racially and traditionally. That is and always has been my aim, even if our generals can’t grasp it’.” (p.213)

According to Kilzer, Hitler was trying to convince the English to make peace. In exchange, he was ready to retreat from Western Europe and from much of Poland.

A more truthful explanation is that Hitler was false opposition. He regarded himself as a British (i.e. Illuminati) agent. It was common knowledge both in England and Germany that far from being Aryan, England was a proxy for the same Jewish bankers Hitler pretended to oppose.

A book by Wolf Meyer-Christian, The Anglo Jewish Alliance published in Nazi Germany in 1940 states: “The unity of the continent is threatened from one direction alone: the English isle. It is not threatened by the English people but by English imperialism: the will to conquer by a relatively small group.
This group is as much English as it is Jewish and Jewish as it is English, and therein lies the problem…
Again, the German and European Jewish problem can only be resolved when… the alliance between the British ruling class and the leaders of world Jewry is dissolved forever. For this alliance is Europe’s deadly enemy.” (pp. 24-25)

In 1941, Friedrich Wilhelm Euler, Nazi Germany’s leading expert on Jewish genealogy, published a lengthy article entitled The Penetration of Jewish Blood into the English Upper Class.
Virtually all of his 148-page article consisted of a catalog of Jewish conversions and subsequent marriages with non-Jews, starting in the fourteenth century. The evidence proved that the English aristocracy had literally sealed a “marriage with Jewry” in terms of its “blood substance”.

This was also common knowledge in England. In 1922, British social critic Hilaire Belloc described the British Empire as a partnership between Jewish finance and the British aristocracy.
“After Waterloo [1815] London became the money market and the clearing house of the world. The interests of the Jew as a financial dealer and the interests of this great commercial polity approximated more and more. One may say that by the last third of the nineteenth century, they had become virtually identical.” (The Jews, 1922).

As said above, if Hitler were really interested in peace with England, he would have taken its army prisoner. That would have forced England to sue for peace. Instead he allowed Germany to be drawn into a two-front war and be destroyed, which was the goal of his Illuminati Jewish masters.
General Guderian later reflected: “What the future of the war would have been like if we had succeeded in taking the British Expeditionary Force prisoners at Dunkirk is now impossible to guess.”