How to Block Microwave Mind-Programming Signals 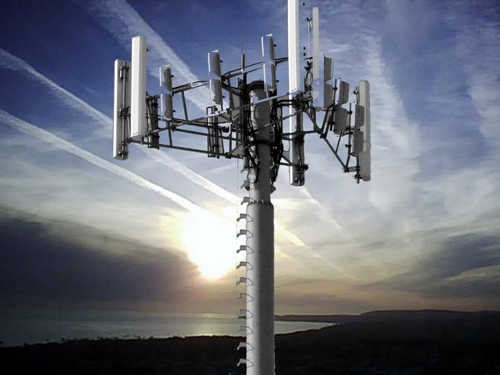 We have all heard jokes about tinfoil hats. Turns out there might be some practical truth to that idea. Aluminum foil really does attenuate (lessen) certain EM radiation if electrically grounded and not touching the skin.
For those who are heavily bombarded by microwave beams from sources like cellphone towers, which is easy to determine if you have an RF signal detector, blocking these waves with grounded metal sheets goes a long way to lessening the radiation.

A large source of dangerous EM radiation comes in the form of microwaves emitted by cell phone towers.
Microwave pollution and intentional targeting can muddle thoughts, induce fatigue, reduce willpower, and maybe even subliminally implant thoughts or entrain emotional states. They may also be used for monitoring purposes. Using a microwave signal strength meter, an independent researcher made several objective observations about these signals:

– They tend to be beamed through the window of a room where one spends the most time, usually the window facing the front street.
– They are specifically directed to target and track a person inside his home.
– The tracking speed is slow, and when the target moves, the signal takes several seconds or minutes to search and find the target at his new location.
– When the target enters an area in his home that the signal cannot reach, the signal goes on a wide search mode, thinking the target has left his home and is traveling about town.
– When the primary window is blocked off, within days the signal finds another window or thin wall to penetrate.
– One can feel the effects of this signal, which may induce a dull headache or pressure in the temples.

It appears cell phone towers are generating these signals by triangulating hotspots on selected tracked targets. This would require that computers perform the calculations necessary to alter the signal of each of three cell phone towers so as to triangulate a hotspot of signal at the target’s location.
When the target moves, new calculations have to be made, which takes several seconds. Maybe something else generates the beams, like satellites.

These signals may consist of microwave carriers with ELF modulation, and perhaps with audio or text encoded messages. Some possibilities:
– The microwaves resonate with DNA, can penetrate flesh and bone, pass through some walls and windows, and are already in use by cell phones.
– These signals entrain brainwaves into a high-beta state, which causes aggression and stress, or an alpha level that induces hypnotic states and muddled thinking.
– Besides the ELF waves that entrain brain states, the carrier may also convey audio messages. They could be something along the lines of “you are angry, you cannot think, you give up, you have no energy, etc.” These audio messages could be modulated into the microwave carrier via frequency modulation, while the ELF brain-entrainment signals could be amplitude modulated.
– There may also be emotional signatures frequency-modulated into the carrier. These can induce anger, frustration, sadness, or essentially any human emotion into susceptible targets
– Standing waves within buildings can cause phase cancellation, turning the EM energy into scalar waves instead. These may have additional psychological, biological, and even paranormal effects.

Who is responsible for all this? Probably shadow factions of the military/intelligence community. If they wish to keep the population docile and keep all dissenters from acting upon their dissenting thoughts, no means are unthinkable to accomplish those ends.

What Can Be Done

There are two things you can do. First, you can learn to better cope with these signals. The more you are in control of your own mind and emotions, and the more observant you are about your own behavior, the less influence these signals have upon your thoughts, feelings, and behavior.
Knowing is half the battle. Second, you can take additional steps to reduce the level of EM radiation in your home, by blocking these signals.

Standard methods of blocking microwave mind programming signals consist of Faraday cages, but proper Faraday cages made from copper mesh are difficult and expensive to build.
Meanwhile, aluminum foil hats actually increase signal exposure by acting as antennas and resonant cavities unless they are grounded, so you can forget about that.

An easy and relatively cost-effective way to block microwaves goes as follows:
1. Obtain these items:
– Several emergency foil blankets (also known as space blankets, emergency camping blankets, or mylar foil blankets). These come in small folded packs, found in the camping section of department stores. Available on Amazon.
– Banana plug to Alligator test leads. These cables will clip onto the foil sheets and plug into the ground hole on your electrical outlet. Available on Amazon.
– Alligator leads, to connect one sheet to another. Available on Amazon.
– Duct tape, packing tape, or masking tape to hang up the sheets.
– RF / MW (radio frequency / microwave) signal detector, optional but highly recommended. Two that work well are the Cornet RF Meters on eBay and 3-Axis EMF Meter (orange ball) on eBay. Detectors are important. They might be called anti-paranoia meters, because these will confirm that you’re not just being paranoid. Their frequency range must go up to 3 GHz minimum, 6 GHz ideal. Anything lower than that will not pick up on the higher frequency microwaves. Avoid the CellSensor detector and anything that’s a gauss meter, since these are only good for low frequency fields under 1000 Hz like from transformers, power lines, and household appliances, not cell tower radiation which is typically in the 900 MHz to 4 GHz (4,000 MHz) range.

2. If you cannot obtain a signal detector, take your best guess at which windows or walls to cover. An ideal choice would be the corner or wall closest to your bed. Any protection is better than no protection. But without a device to measure what’s really there, your subjectivity may get the better of you.

3. Use the signal detector to record the relative signal strength from all windows in the room you wish to protect, preferably the office or bedroom. You can even move a metal pan held a foot away from the detector, around the detector in order to block the beam, thereby indicating what direction the beam is coming from.
Depending on the type of detector, you may also notice peaks and troughs in the signal strength, as you move the detector in a linear direction; these are the nodes and anti-nodes of standing EM waves being detected.

4. Without gaps, cover the walls or windows with emergency foil blankets, using tape to hang up and connect the pieces. It does not matter which side of the blankets faces the wall as far as effectiveness goes, but put the metallic side (which can be scratched off) toward the wall or window so that it doesn’t get rubbed off by stuff in the room brushing up against it.
If covering walls is too much, then just cover the window. If this is too ugly for you, then using this same method you can make a safe room out of a large closet, or put your bed or desk in the corner and cover the half of the walls adjacent to it. Leave some openings for ventilation.

5. Widen the splayed banana plug tip by inserting a knife of thin screwdriver into the gaps, and stick into the ground jack on your electrical outlet. This is the middle one that’s round, not slotted.
It won’t fit in the slots anyway, which carry dangerous electricity. These instructions are written for the USA type outlets; consult references for your country’s outlets otherwise, looking for the ground connection.

6. Then connect the alligator clip end to the bottom edge of a blanket, so that it grips onto both sides of the foil. Then use double-alligator wires to connect one blanket piece to another, so that an electrical pathway is traced between the grounded plug and the last blanket. The more grounded outlets used, the better.

7. Check for incoming radiation, add another blanket where necessary. After an hour or two (or a week or two) check the remaining windows and compare their signal strength to what you recorded previously. If they are now showing intense incoming radiation, the signal has re-oriented and you must cover that wall or window as well. 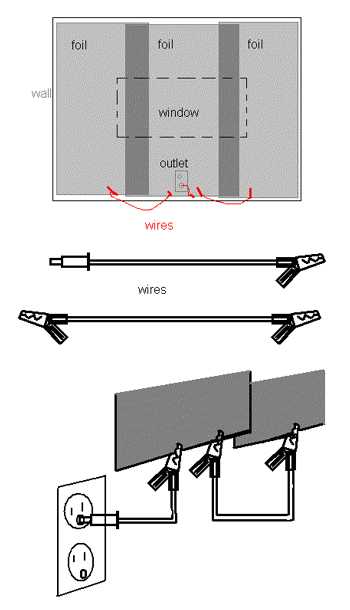 You will feel the difference. As an experiment, tape up only half of a grounded blanket, so that you stand before an uncovered window. Verify the beam is strong. Then tape up the rest so the window is covered.
The pressure in your head may disappear, only to reappear if you pull the blanket down again. If you live in a flat urban area, the field intensities tend to be high. Some places the radiation is surprisingly weak and so no foil blankets are necessary.

Why does this work? Microwaves cannot easily penetrate metal, especially grounded metal such as the electrically grounded foil blankets. When an incoming microwave beam hits the foil, if the foil isn’t grounded then it will “splash around” and reflect in various ways, sort of like a water hose aiming at a dinner plate.
Your meter will detect the energy leaking out around the foil blankets in that case. Radiation will still enter your home but at least not be as directional.

But if the foil is grounded, then the energy is sucked out of the beam and channeled into the ground hole on the outlet and out of the building through a copper rod sunk into the soil (buildings are supposed to have these per regulation). Then the sheet acts as an absorber.

The reason why emergency blankets are recommended over Reynolds aluminum foil is that these blankets are larger, more durable, cheaper, and easier to hang up. But you can use aluminum foil if you wish, and being thicker they will be slightly better at attenuating the frequency.

Though some signal still gets through, and foil does not block pure ELF waves (ones without a higher frequency carrier), this is one step to greatly reducing the level of incoming microwave radiation. To block ELF and especially scalar waves is not easy, so we have no tips regarding those.

For temporary relief, go to the basement, lie on the floor, or move around. These prevent strong hot spots from locking onto you. This may seem paranoid, but test it with a signal detector and you will verify this for yourself.

If one has a choice, avoid spring mattresses. Use instead air mattresses, waterbeds, wooden cots, or futons. Platform beds made of wood are available to support a futon mattress. Springs are like antennas, and focus EM and ELF energy into your body while you sleep.

Get proper sleep and nutrition. This means enough calories, protein, adequate minerals, plenty of clean water, and fresh fruits and vegetables. Being deficient in any of these will cause mental weakness and submissiveness to mind programming signals. Foil shielding may improve sleep, if sleep is being disrupted by such fields.

Question baseless thoughts or emotions you may have, especially negative emotions such as aggression or depression that urge you to act without thinking. Becoming aware of their presence is often enough to deactivate them.

Don’t let the means become an ends. Reducing mind programming signal influences should serve to increase your productivity and efficiency in what you truly desire to do, the goals you choose to follow. Don’t let fear and paranoia become obsessions that displace the importance of following your goals.