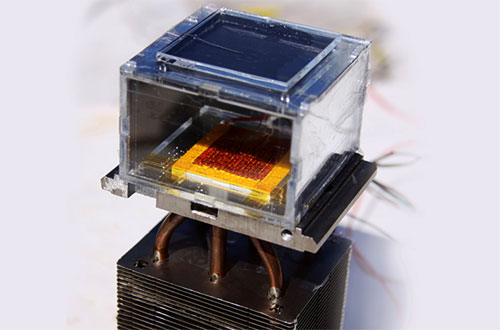 A Massachusetts Institute of Technology (MIT) – University of California (UC) Berkeley invention may offer hope for the two-thirds of the world’s population experiencing water shortages, including the one third living in desert climates.

MIT scientists have invented a water harvester that uses only sunlight to pull water out of the air under desert conditions, using a “metal-organic framework” (MOF) powdered material developed at the UC Berkeley.

Under conditions of 20–30% humidity (a level common in arid areas), the prototype device was able to pull 2.8 litres (3 quarts) of water from the air over a 12-hour period, using one kilogram (2.2 pounds) of MOF.

(Left) A schematic of metal-organic framework (MOF) material. The three large yellow, orange, and green balls are porous spaces for capturing and concentrating water molecules. (Right) As ambient air diffuses through the porous MOF, water molecules preferentially attach to the interior surfaces. Sunlight entering through a window heats up the MOF and drives the bound water toward the condenser, which is at the temperature of the outside air. The vapour condenses as liquid water and drips into a collector. (Credit: UC Berkeley and MIT)

In 2014, a UC Berkeley team led by chemist Omar Yaghi, PhD, synthesized a porous MOF – a combination of zirconium metal and adipic acid – that was able to bind water vapour. He suggested to Evelyn Wang, PhD, a mechanical engineer at MIT, that they join forces to turn the MOF into a water-collecting system.

On April 13, 2017, the system was announced in a paper published in the journal Science, with Yaghi and Wang as co-senior authors.

“We wanted to demonstrate that if you are cut off somewhere in the desert, you could survive because of this device. A person needs about a Coke can of water per day. That is something one could collect in less than an hour with this system.” said Evelyn Wang

The new solar-powered harvester is a major breakthrough in the long-standing challenge of harvesting water from the air at low humidity, according to Yaghi. “There is no other way to do that right now, except by using extra energy. Your electric dehumidifier at home ‘produces’ very expensive water.”