If You Question the Establishment You Are Guilty of Espionage, Says Corporate Media – Because Of Russia 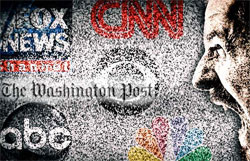 Mainstream, corporate media has launched a dangerous and slanderous campaign to label any news outlet not spewing accepted governmental narrative as professional Russian propagandists – and those unaware they’d apparently been duped by Russia, “useful idiots”.

Ordinarily, the complete dearth of proof this claim has even a shred of truth would cause a reflexive eye roll – but in this case, the American exceptionalist machine behind the supposed analysis calls for FBI and Department of Justice to investigate possible violations of Espionage Act.

Conflating legitimate journalism with espionage because it refutes a narrative acceptable to the establishment is categorically ludicrous.

This irresponsible, criminal violation of ethics devoid of any journalistic integrity came from the Washington Post, which ‘reported’ two “teams of independent researchers” discovered “the Russians” were behind “fake news” articles to help Donald Trump win the election and “undermine faith in American democracy”.
It could be said “you can’t make this up” – but apparently that’s exactly what these so-called ‘expert’ researchers did.

“The flood of ‘fake news’ this election season got support from a sophisticated Russian propaganda campaign that created and spread misleading articles online with the goal of punishing Democrat Hillary Clinton, helping Republican Donald Trump and undermining faith in American democracy, say independent researchers who tracked the operation,” the Post declared.

Russia’s increasingly sophisticated propaganda machinery – including thousands of botnets, teams of paid human ‘trolls’ and networks of websites and social-media accounts – echoed and amplified right-wing sites across the Internet as they portrayed Clinton as a criminal hiding potentially fatal health problems and preparing to hand control of the nation to a shadowy cabal of global financiers. The effort also sought to heighten the appearance of international tensions and promote fear of looming hostilities with nuclear-armed Russia.

However, as has been the highly-suspect tendency thus far in the corporate media’s war on ostensible disinformation, literally no evidence accompanied the Post’s report – nor the analyses provided by these two putatively independent research groups – making the article a prime example of libel. 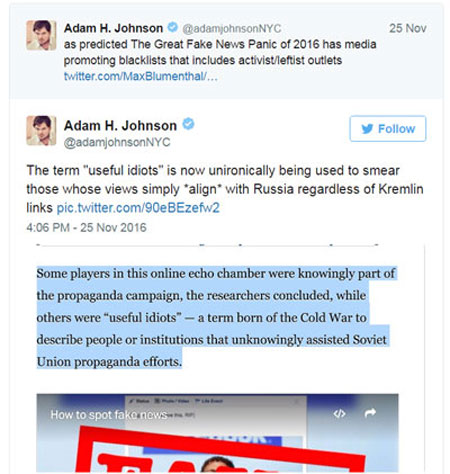 In fact, the credibility of this reporting is so wet tissue paper-flimsy, even the mainstream outlet Fortune refuted the contents in an article appropriately titled, No, Russian Agents Are Not Behind Every Piece of Fake News You See, because “the case starts to come apart at the seams the more you look at it”.

Fortune notes one of the two research groups, the Foreign Policy Institute, is “a conservative think tank funded and staffed by proponents of the Cold War between the U.S. and Russia, which says it has been researching Russian propaganda since 2014.”

PropOrNot, the other group publishing the exhaustive list of even award-winning sites, “tweets and retweets anti-Russian sentiments from a variety of sources, has only existed since August 2016”, according to Fortune. “And an article announcing the launch of the group on its website is dated last month [October 2016].”

None of the supposedly multiple people responsible for the fledgling PropOrNot website are named, even by the Post. Its executive director, whom the Post quoted “on the condition of anonymity to avoid being targeted by Russia’s legions of skilled hackers” – a laughable excuse worthy of its own tinfoil hat – claims, “The way that this propaganda apparatus supported Trump was equivalent to some massive amount of a media buy. It was like Russia was running a super PAC for Trump’s campaign. It worked.”

Once again, the “Russia did it” narrative belies the underlying establishment frustration and inability to come to terms with the loss of democratic election – a loss alternative, independent media undoubtedly assisted, but not for the tiresome reasons corporate outlets repeat ad infinitum. 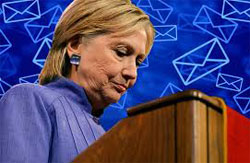 Hillary Clinton did not lose the 2016 presidential election because some shady, Russian-government crafted cabal of non-mainstream outlets plotted her downfall for the benefit of Donald Trump. Indeed, most of the outlets listed – including The Free Thought Project – castigated both Clinton and Trump when pertinent information became available.
No, Hillary Clinton lost because – even faced with as contentious a character as megalomaniacal Trump – the American populace has grown too weary of Washington politics-as-usual, foreign policy-as-usual, and corruption-as-usual.

Independent media did a phenomenal job reporting on revelations published by WikiLeaks, and equally stellar slaying of U.S. government propaganda reported as legitimate news by irresponsible corporate media presstitutes, who some time ago abandoned journalism for establishment acceptance.

Pointing fingers will never make this any less true – and, in actuality, only deepens the shameful dereliction of journalistic duty.

To wit, the Post’s regurgitating this thinly veneered anti-Russian agenda as fact, when literally no investigation was undertaken – no one contacted the outlets on this list to offer their side, for example – is precisely the sort of ‘fake news’ the establishment insists it needs to fight.

Fortune points out: “There’s also little data available on the PropOrNot report, which describes a network of 200 sites who it says are ‘routine peddlers of Russian propaganda’ which have what it calls a ‘combined audience of 15 million Americans’. How is that audience measured? We don’t know. Stories promoted by this network were shared 213 million times, it says. How do we know this? That’s unclear.

Once again, we have literally unverifiable ‘information’ coughed up by unknown entities, who employed unknown methods to produce a blacklist of media sites – which incidentally includes a disparate mishmash from Ron Paul and Chris Hedges, to the Drudge Report and Lew Rockwell – that the public should deem verboten because they said so. That, and because of Russia.”

As The Intercept’s Glenn Greenwald tweeted: 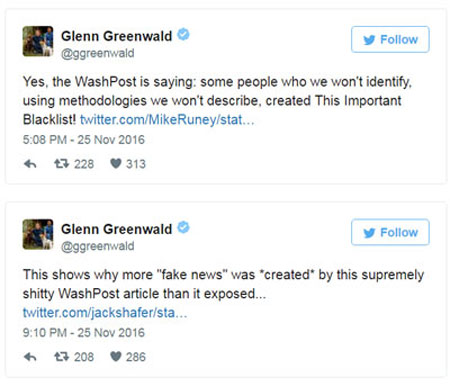 PropOrNot paradoxically claims it “fiercely believe in the rights to freedom of expression and freedom of the press, and have no interest in seeing anyone punished for exercising them.”

Although PropOrNot flatly claims its questionably researched and flagrantly unvetted list shouldn’t be considered McCarthyistic, well, it is.

“So in other words, any and every one who is anything but a liberal drone is now a Russian plant?” Zero Hedge, which also landed a spot on the Everyone the Establishment Dislikes Is a Russian Agent list,asked rhetorically. “McCarthy would be proud.”

Surveillance Self-Defense Against the Trump Administration