Simply by looking at the image at the top of this article, most readers probably identified the clear, unmistakable reference to Monarch programming. And there is much more. But the people at Ikea could not expect anything else by hiring Bea Akerlund. Indeed, she and her husband – influential video director Jonas Akerlund – have been shaping pop culture and infusing it with the elite’s imagery for years. And that is not an overstatement. 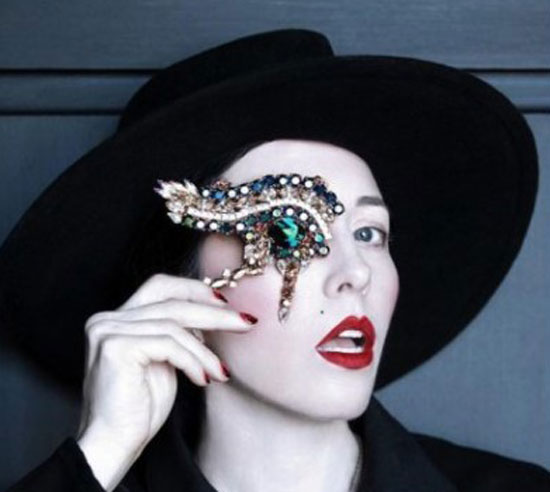 The work of Bea Akerlund is everywhere and has been featured several times in the alternative media. She worked Lady Gaga’s Paparazzi, Britney Spears’ Hold it Against Me and Work B*tch, Beyoncé’s Lemonade and countless others – often with her husband Jonas Akerlund acting as the video director. Bea is also behind Madonna’s very occult 2012 Superbowl performance. 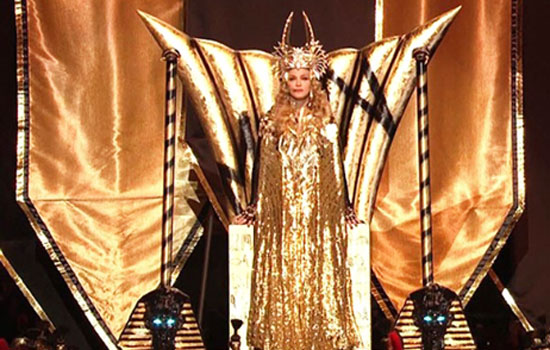 Madonna’s entrance at the 2012 Superbowl celebrated Grand Priestess of the industry and replicated The Chariot tarot card.

Each article in the alternative media provides tons of examples of the Akerlund’s focus on occult-elite, MKULTRA symbolism. However, it is with lesser known acts that the true, unfiltered spirit of the Akerlunds shines through. 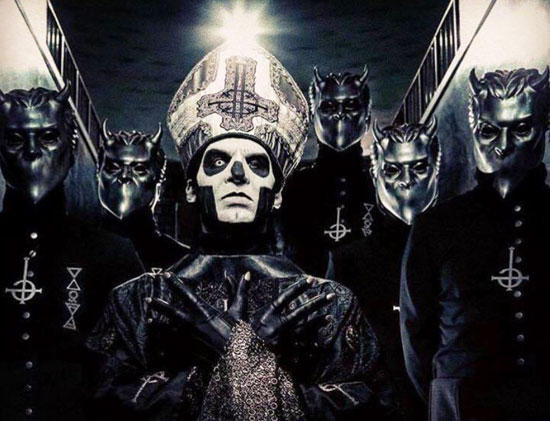 Bea worked a few times with the Swedish band Ghost. As you can see, it is all about explicit Satanism.

The ad campaign promoting the Omeldebar collection mixes hypnotic patterns with circus-fanfare music that screams: “I am losing my mind”. And, right from the beginning, there is no doubt that we’re in Monarch Programming territory.

Bea stands inside a room with dualistic black and white stripes – an important part of MK programming. She wears a leopard-print dress which is associated Sex Kitten programming and used to identify Beta slaves.
The ad then references another Monarch programming staple: Alice in Wonderland. 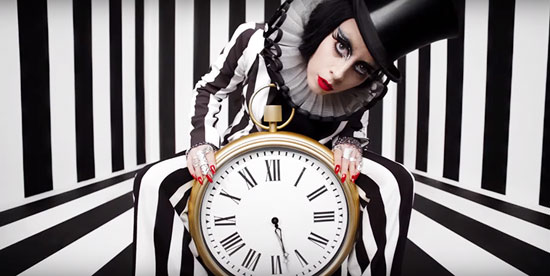 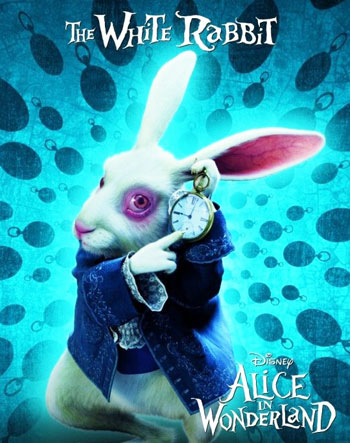 The White Rabbit on an Alice in Wonderland poster.

In Alice in Wonderland, Alice follows the white rabbit through the looking glass into a non-sensical, confusing world where anything can happen. In Monarch programming, Wonderland represents the slave’s dissociated state which is fully controlled by the handler.

The next scene confirms that this is all about Monarch programming and nothing else. 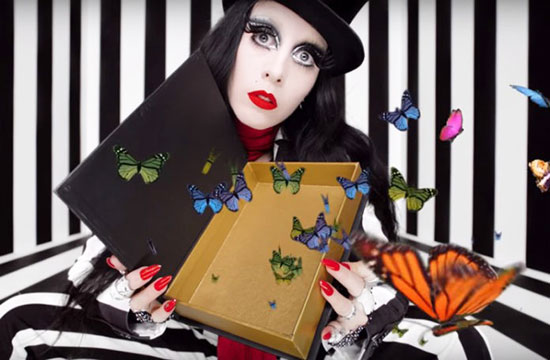 Bea opens a box and Monarch butterflies fly out of it. This cannot be more about Monarch programming.

Then, things go deeper into the murky world of MK. 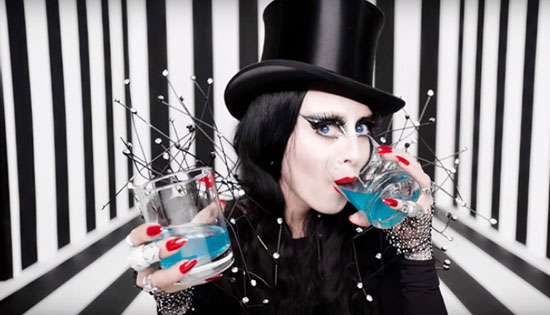 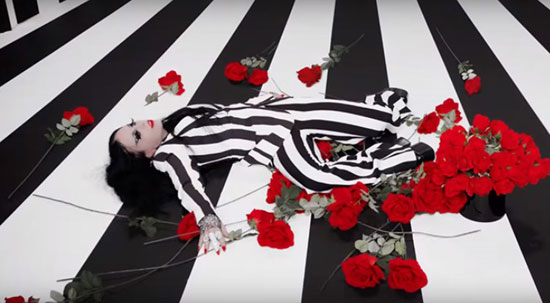 In the next shot, she lays on the ground, lifeless. Is this a reference to the drugging of slaves during trauma and programming?


The above screenshot is significant for another reason: it is a recreation of paintings made by an actual Monarch mind control survivor: Kim Noble. 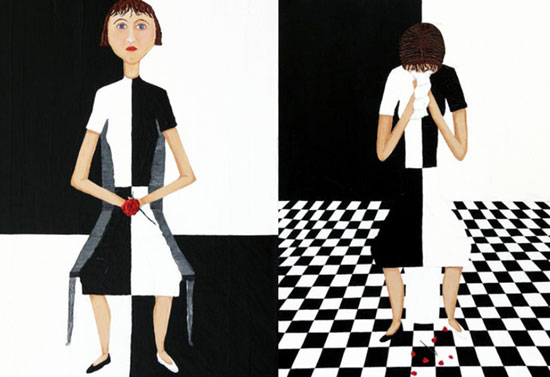 Nobles’ paintings Waiting Rose and Crying Rose portray a slave wearing dualistic clothing inside a room with a dualistic pattern.

In the first painting, the girl holds a rose in her hands. In the second, the girl is crying and the rose is on the ground, destroyed. This can represent the slave after being “deflowered” by her handler. 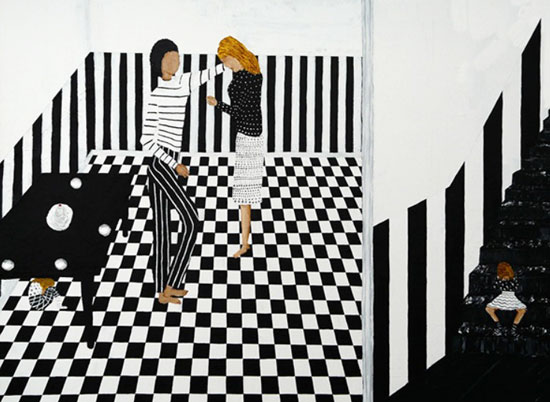 Under The Table – another painting by Noble that focuses on dualistic patterns and references to abuse by a faceless handler.

Yes, you are still reading an article about an Ikea commercial. Did you expect things to get so dark? Well, this is the world we live in now. This is what is being promoted all over mass media now. 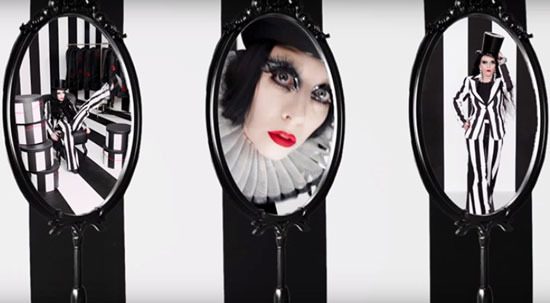 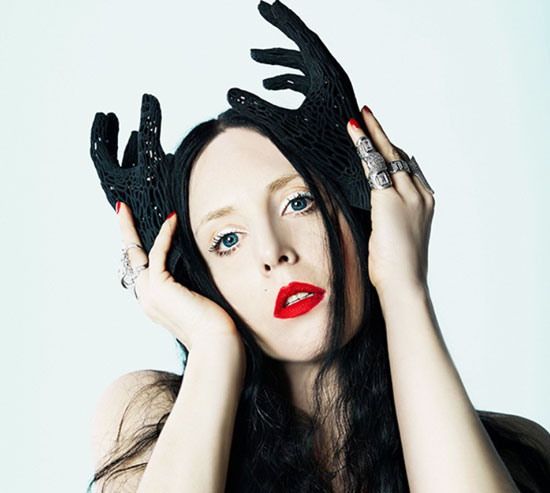 Bea does devil horns with the hand things she sells. So much creativity.

The fact that Bea and Jonas Akerlund are given lucrative contracts by the world’s largest companies should come as a no surprise. They are the elite’s favorite image makers. Everything they do is permeated with the elite’s sick obsessions: mind control, ritual abuse, Satanism mixed with “style” and “glamour”.

They’ve shaped the images of the world’s most influential stars such as Lady Gaga, Beyoncé, Katy Perry, Britney Spears and countless others. They’re a major reason why pop culture is now a pool of homogeneity where all “artists” end up displaying the same symbolism. Personal style and visual imagery used to be a way for artists to express their individuality, their rebellious nature and their unique world outlook. Now, “style” and “fashion” are a uniform indicating submission to the elite’s agenda. And, now, they’re selling that uniform to you.

Ex-Canadian Defense Minister: US Has Technology for Shooting Down UFOs