Ex-Canadian Defense Minister: US Has Technology for Shooting Down UFOs

Paul Hellyer, a whistleblower and alien conspiracy theorist, says that the US not only traded technology with aliens for years, but even possesses technology capable of shooting down extraterrestrial spaceships. 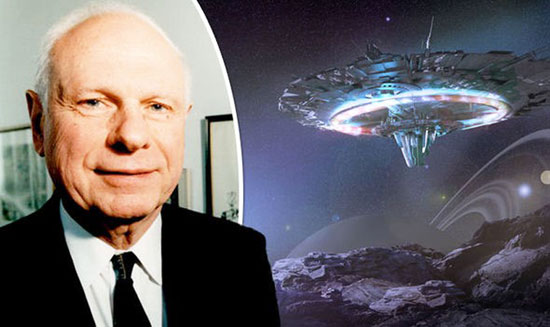 The United States has developed technology capable of downing alien spaceships, says Hellyer, a 94-year old Canadian engineer, politician, writer, commentator and alien conspiracy theorist.
“I do believe they have developed two or three kinds of weapons that are capable of disabling and bringing down UFOs”, he told the Daily Star.

According to Hellyer, the United States has been exchanging technology and even salvaging technology from the advanced lifeforms.
“That is the primary purpose of the anti-ballistic missile shield, the weapons are ones that can be aimed in either direction to control the situation on Earth but equally, if not more important, to shoot down UFOs”, he told the Daily Star.

What makes this claim particularly noteworthy is the fact that Hellyer was once minister of national defense of Canada from 1963 to 1967 and minister of transport from 1967 to 1969.

In 2014, Hellyer told RT that there are at least four different alien species that have visited Earth for thousands of years. Some of them are actually interacting with the US military at an Air Force base in Nevada. According to Hellyer, the US military have been exchanging technology with “Tall Whites”, as he describes the alien race, since the 1960s.

According to the Daily Star, he cited former US Air Force serviceman Charles James Hall, who has written about his alleged encounters with aliens at a Nevada base, as having told Hellyer they had a hangar for a “mother ship that came into the side of a mountain on the nights of a full moon”.

However, despite having weapons capable of shooting down UFOs, there is no need to do that, as the aliens the US plans to shoot at are actually friendly and are more concerned about the way humans treat their planet.
“They are friendly, most observers believe, so why would we shoot at friends?” Hellyer asked.

It’s also possible that the US has not shot any UFO yet because, as Hellyer said in 2013 in another interview for RT, that would spark an “interstellar war”.
On the other hand, if the alien world turned out to have oil…