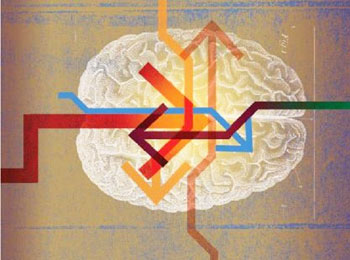 In a lab in Charlottesville, Virginia an experiment is underway. A mouse is swimming in a pool of water, looking for a place to rest. He’s done this same task 12 times already and with the help of his experimenter, through visual clues and training he was able to find the platform in the center of the pool previously. But one day later, he’s swimming again, for the thirteenth time and he’s having trouble finding it, just like on his first day of swimming. What seems to be the problem? The mouse now has no T-cells.

University of Virginia’s Jonathan Kipnis says: “Mice without functional T cells do not perform cognitive tasks as well as wild-type mice do.” He was the first to see and demonstrate a relation between the immune system and cognitive function back in 2004 while he was part of Michal Schwartz’s lab at the Weizmann Institute in Rehovot, Israel. Later, he was able to learn that the pro-cognitive effect of T cells’ is facilitated by the cytokine interleukin-4 (IL-4), which prevents macrophages from generating proinflammatory signals that impede a protein important for learning and memory.

Mr. Kipnis’ work is in line with the new trend of research which is shedding new light on how researchers understand the bond between the central nervous system and the immune system. It was not so long ago that scientists believed that the brain and spinal cord were not linked to the immune system in any way, unless something terribly wrong happened. They were aware that MS (Multiple sclerosis) is caused by T cells that crack through the selective border called the blood-brain barrier (BBB), enter the central nervous system and attack the myelin sheath covering neurons. Even microglia, specialized macrophage-like immune cells that scientists had recognized as normal CNS (central nervous system) residents since the 1960s, were mainly studied in the context of disease. 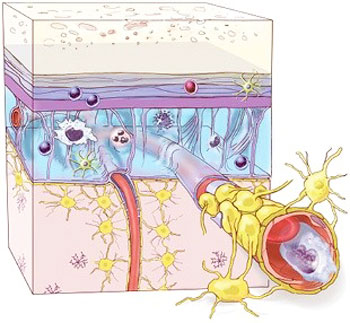 However, in the past twenty years, scientists have determined that our immune system, the entirety of it, is an integral part of a functioning central nervous system, having a major role in functions like cognition, injury repair, neurodegenerative disease, and sensory systems. Microglia pervade the CNS, including the white and gray matter that constitute the organ’s parenchyma. Other immune cells, including T cells, monocytes, and mast cells, reside in the brain and spinal cord’s outer membranes, known as the meninges, and circulate in cerebrospinal fluid (CSF).

Serge Rivest, a neuroscientist at Québec’s Centre Hospitalier de l’Université Laval talks about the link between the brain and immune system:
“Ten or 15 years ago, it was all bad. These days researchers are focused on understanding the good in addition to the bad and the ugly.”

IMMUNITY IN THE BRAIN

Until recently, the central nervous system was thought to be cordoned off from the peripheral immune system, but researchers now know that diverse immune cells—possibly by the millions—circulate in the cerebral spinal fluid and live in the brain’s outer membranes even in healthy individuals.

Even back in the 80ties researchers were aware that immune cells penetrated the CNS after an injury, but this activity was seen as something that needed to be obstructed not stimulated. As a matter of fact, for decades, brain injury was treated with corticosteroids (immune cells suppressors). But it didn’t make any sense for Schwartz was that tissues as vital as the brain and spinal cord wouldn’t take advantage of the immune system’s ability to protect against pathogens and repair damaged tissues. That’s why towards the mid-1990s, she started a research to find a positive neurological role of the immune system.

Her team first nicked the spinal cords in rats, and then injected macrophages at the injury site. This action restored the animals’ motor function. As with other tissues, like the liver or muscles, the macrophages eased the healing process. But, at the same time, other researchers’ work revealed that if they eliminated macrophages in rats and mice the recovery from spinal cord injury was improved, so undoubtedly this led to Schwartz’s work, as she says, being “met with a high degree of skepticism.”

But this didn’t discourage her, on the contrary, it inspired more research into the topic, and others started discovering more ways in which the immune cells promote CNS repair after injury. For example, macrophages can have a damaging effect on neurons by secreting cytokines, proteases, or reactive oxygen species, but experiments showed that in rat and mouse models of spinal cord injury, they also produce transforming growth factor-beta (TGFβ), which promotes wound healing and interleukin 10 (IL-10) which helps resolve inflammation. So, it was towards the end of 2000s, when researchers first recognized that various subtypes of macrophages can have a positive effect on neuronal growth in rodents, some were even essential for recovery. Opinions started to shift on the clinical side as well, after the Corticosteroid Randomization After Significant Head Injury (CRASH) study in 2004 revealed that instead of helping brain injury patients recover corticosteroids actually increased the risk of disability and death.

In a more recent research it was discovered that macrophages and other innate immune system components aren’t the only ones that can improve CNS health, the cellular drivers of adaptive immunity play a positive role as well. Schwartz and her team demonstrated in 2013, in a mice experiment, that the lining of each of the brain’s four ventricles harbors memory T cells whose receptors bind proteins found in the CNS. Although these T cells are specific for CNS proteins, they don’t cause autoimmune disease. Schwartz contends that their specificity allows them to respond to local CNS damage. 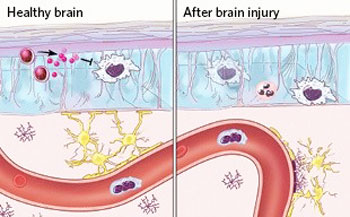 They were also able to show that T cells present in this lining, called the choroid plexus, secrete cytokines such as interferon gamma (IFNγ), which allows selective passage of CD4+ T cells and monocytes from the blood into CSF within the ventricles. In a model of spinal cord bruising, mice deficient for the IFNγ receptor had reduced immune cell trafficking across the choroid plexus and poor recovery of limb movement. And last year, Kipnis’s team reported that IL-4 produced by CD4+ T cells in the CNS signals neurons to regrow axons after spinal cord or optic nerve injury.

IN SICKNESS AND IN HEALTH

The immune system is a critical part of a healthy central nervous system (CNS), as well as the CNS’s response to injury.

Dorian McGavern, an immunologist at the National Institute of Neurological Disorders and Stroke in Bethesda, Maryland, wanted to gain a better understanding about how different immune cells contribute to injury repair so he started tracking CNS injury responses in real time. With the help of two-photon microscopy to image cells below the surface of brain tissue in living animals, with his colleagues, he was able to see that just minutes after injury, microglia clear up debris in the parenchyma. “They’ll look around the environment, and basically start street-sweeping and picking up all the dead material,” McGavern says. Meanwhile, other immune cells remain confined to the meninges and to the so-called perivascular spaces between larger cerebral blood vessels and their sheaths of pia mater, the innermost meningeal membrane.

McGavern says: “When we watch the anatomy [after injury], we see that the microglia will stay in the brain parenchyma, and the neutrophils and macrophages will come to the lining of the brain and the perivascular spaces.”

They also experimented by preventing macrophages from entering the CNS by obstructing the receptors that respond to nearby cell damage which showed that the mice were in worse condition within the first 24 hours after injury. “In every case, we have created more injury and more [neural] cell death.” They also discovered that microglia strengthen the BBB, which is composed of endothelial cells, pericytes, and astrocytes. Microglia fill in spaces left by astrocytes killed or damaged during injury. “Without a robust barrier unwanted immune cells may flood the parenchyma and do more harm than good” McGavern says.