In the course of two weeks since the alleged chemical attack in Syria’s Khan Shaykhun, no one has asked for antidotes, the town is living its life, an the impact zone has not been identified, the Russian Defense Ministry’s spokesman said. 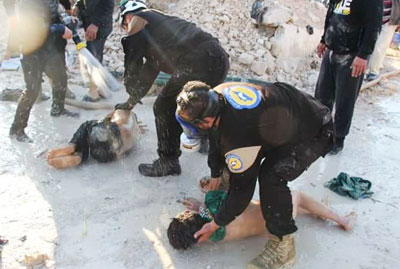 “The impact zone in Khan Shaykhun, from where locals had to be evacuated, has not been identified. The town is living its life. Neither locals nor pseudo-rescuers have even asked for medicines, antidotes, decontaminants,” Maj. Gen. Igor Konashenkov said.

“It is clear that, as in Iraq and Libya, there are simply no plans to carry out a qualified investigation in Khan Shaykhun by the current ‘schemers’ of the chemical attack,” he added.

Two White Helmets volunteer group videos remain the only evidence of the incident.

He pointed out that US, UK and European TV-channels have not shown yet even a single “hero rescuer” or “an affected person” except for the ones in the videos.

The spokesman said that the number of unbiased experts who question the mainstream media coverage of the incident is growing.

“Having knowledge and practical experience, these experts cannot explain how White Helmets could work in an impacted zone for such a long time without gas masks and special protective clothes, and remain alive. These doubts multiply by zero the allegations spread by Western politicians and diplomats who were quick to appoint the ‘culprit’ without fact-checking and investigation,” he said.

The Russian Foreign Ministry has said that the discredited White Helmets and the Syrian Observatory for Human Rights (SOHR) cannot serve as credible sources of information, while President Assad accused them of being affiliated with al-Qaeda terrorists.

The White Helmets styles itself as a volunteer non-governmental organization aimed at protecting the civilian population in war-torn Syria, yet a number of videos emerged revealing that rescue operations were staged with the “victims” wearing make-up and given instructions what to say. The rescue workers were allegedly seen on some videos with arms and in military uniform.

On April 4, a chemical weapons incident in Syria’s Idlib province claimed the lives of some 80 people and inflicted harm on an additional 200 civilians. The Syrian National Coalition of Revolutionary and Opposition Forces, as well as a number of Western states, accused the Syrian government troops of carrying out the attack, while Damascus refuted these allegations, with a Syrian army source telling Sputnik that the army did not possess chemical weapons.

The Russian Defense Ministry said on April 5 that the airstrike near Khan Shaykhun by the Syrian air force hit a terrorist warehouse that stored chemical weapons slated for delivery to Iraq, and called on the UN Security Council to launch a proper investigation into the incident.

Russian President Vladimir Putin said April 6 that groundless accusations in the chemical weapons incident in Syria’s Idlib were unacceptable before the investigation into the matter had been carried out.

However, the incident was used as pretext for a US missile strike against the Ash Sha’irat airbase carried out late on April 6. US President Donald Trump characterized the strike as a response to the alleged use of chemical weapons by the Syrian government troops while Russian Foreign Minister Sergei Lavrov said it was a violation of the international law. Iranian Supreme Leader Ayatollah Ali Khamenei described the US missile strike against the Syrian airfield as a strategic mistake.

In an exclusive interview with Fox Business on April 12, US President Donald Trump blamed the current situation in Syria on Moscow’s support for country’s Assad, calling the Syrian leader “an animal.”

Earlier this year, Syrian President Bashar Assad said that the country’s government had never used weapons of mass destruction, including chemical weapons, against the Syrian people. Besides, under a Russian-US deal after the east Ghouta sarin gas incident in 2013, Damascus joined the Convention on the Prohibition of Chemical Weapons and agreed to destroy its stockpile under Organization for the Prohibition of Chemical Weapons (OPCW) oversight. In January 2016, the OPCW announced that all chemical weapons in Syria had been destroyed.