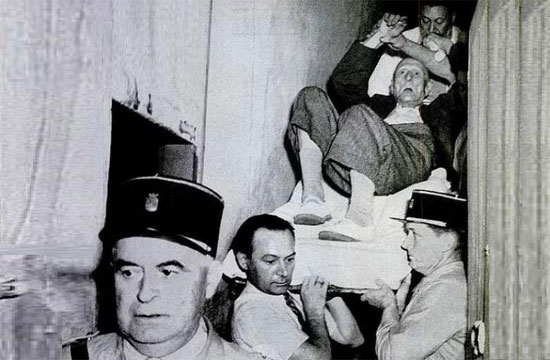 In 1951, a French village suddenly became plagued with hallucinations and mass insanity. For decades, it was assumed that local bread had been poisoned with psychedelic mold, however, it has recently been discovered that instead, the CIA had contaminated the village’s food with LSD.

The discovery was found by writer H.P Albarelli Jr., who published a book on the incident. According to him, the incident was a part of the CIA’s secret mind-control experiments that were conducted by use of drug-grade LSD.

The village had long referred to the incident as the mystery of Le Pain Maudit (Cursed Bread) and it has continued to haunt the village for quite some time. Beginning on August 16, 1951, villagers suddenly began to have strange and horrific hallucinations of snakes, dragons, and fire. Dozens were placed in asylums and hundreds of others were left with various signs and symptoms of madness.

One man, Leon Armunier, who was working that day explained that, “It was terrible. I had the sensation of shrinking and shrinking, and the fire and the serpents coiling around my arms,” he remembers. It was then that he fell off of his bike and was escorted quickly to a hospital in Avignon. Once he arrived, they placed him in a straight jacket and put him into a room with teenagers that were chained down to their beds. “Some of my friends tried to get out of the window. They were thrashing wildly… screaming, and the sound of the metal beds and the jumping up and down… the noise was terrible. I’d prefer to die rather than go through that again.”

Another man attempted to drown himself, due to his beliefs that he was being eaten by snakes. A young adolescent boy tried to murder his grandmother, while another man who believed that he was a plane jumped off a building leading his legs to be broken.

However, it was later decided that a local baker had unfortunately contaminated his bread flour with ergot, which is a hallucinogenic mold that could cause similar symptoms. Now, over five decades later, H.P. Albarelli Jr. has investigated the matter for his book. According to him, the incident had little to do with contaminated bread and more to do with a top-secret mind control experiment conducted by the CIA. His findings are based on a CIA document entitled “Pont-Saint-Esprit and F. Olson Files. France Operation file, inclusion Olson. Intel files. Hand carries to Belin-tell him to see to it that these are buried.”

F. Olson, according to the BBC, was Frank Olson, or a CIA scientist that had led the research for the agency that was looking into LSD. David Belin worked for the Rockefeller Commission that had been created by the White House in 1975 to look into the various abusive accounts carried out by the CIA.

Furthermore, it is indisputable that the CIA has conducted a variety of LSD involved mind control experiments throughout the world involving Britain, and Korea, while the Cold War tensions were steadily rising. Albarelli explains in his book A Terrible Mistake: The Murder of Frank Olson and the CIA’s Secret Cold War Experiments that he had spoken to the former coworkers of Frank Olson who had told him that the Pont-Saint-Esprit incident was just a part of a variety of mind control experiments that had been carried out by the CIA.

However, what he could not find in his research, was whether or not French authorities were aware of the true nature of the incident. Included in a variety of news reports are requests from French intelligence agencies demanding information from the CIA regarding the statements included in the book. Many others, including those who were affected by the incident, have also requested answers. Charles Granjoh explained to a French magazine that he “almost kicked the bucket,ˮ continuing, he stated, “I’d like to know why.ˮ