Is A Real Civil War Possible in USA? 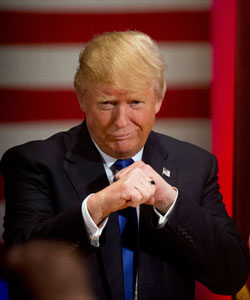 The Trump victory is very good news for the US – relative to a win for Hillary, which would have been an unmitigated disaster.
Will Trump winning mean a real change in direction for the US? Unlikely. Don’t mistake Trump for a libertarian. He has all kinds of stupid notions – torture as official policy, killing families of accused terrorists, and putting on import duties. He has no grasp of economics. He’s an authoritarian. His cabinet choices, so far, are all neocons and Deep State hangers-on. He’s likely to treat the US as if it were his 100% owned corporation.

On the bright side, he has real business experience – although of the kind that sees government as a partner. He’ll try, and be able if he does, to pull up any agencies by the roots. He’ll mainly be able to set the tone, as did Reagan. But still, something is better than nothing.

That’s an accurate description of reality. But, in truth, it’s a little unfair to the Republicans. The creatures who control the Republican Party are one thing – and they were massively repudiated by the victory of Trump. Good riddance. But the people who gravitate towards the GOP are something else. To them, the GOP mostly represents a cultural club they belong to.

Rank and file Republicans don’t have any cohesive philosophy binding them together. They’re just sympathetic to “traditional” values. They like the picture postcard version of America. The 1950’s style Father Knows Best family. The world of American Graffiti. A house in the suburbs, or a small, neat farm. Thanksgiving dinners with relatives. The exchange of Christmas cards. Going to church on Sunday. The husband having a job that allows him to support the wife and kids. Chevrolets and Fords. A relatively small, non-predatory government. A friendly neighborhood cop. A basically decent and stable society, which doesn’t tolerate crime, or overly outlandish behavior, where social norms are understood and observed.

You get the picture. It’s a cultural thing, not an ideological or political construct. Unfortunately, it’s no longer a reality. It’s more and more just an ideal, about as dated as a Norman Rockwell painting on the defunct Saturday Evening Post.

The Democrats are quite different in outlook. They see themselves as hip and sophisticated, and see traditional values as “square”. They’re for globalism, not American nationalism. Forget the clean-cut Mouseketeers; the fat and loathsome Lena Dunham is the new role model. Political correctness rules. White men are automatically despised. Black is beautiful. Women are better than men. The very idea of America is in disrepute, and held in contempt. Multiculturalism overrules home-grown values. Etc. Etc.

You’ll notice that there was very little discussion about policy in this election. It was almost all ad hominem attacks, mostly pushing emotional hot buttons, not intellectual points. It’s all about a culture clash. It’s a non-violent civil war. These two groups no longer have very much in common. And they don’t just disagree, they hate each other.

Is a real civil war possible? Unlikely. The electorate is too degraded to actually get off their couches to fight, apart from the fact few know how to use a gun anymore. Besides, 25% of the US is on antidepressants or other psychoactive drugs; they’re too passive to want radical change. Almost half the country is on some form of the dole; they fear having their doggy dishes taken away. More than half the country is obese; fat people tend to avoid street fights. The median age in the US is 38; old people don’t usually get in fights. Anyway, everybody lives on their electronic devices, not the real world. 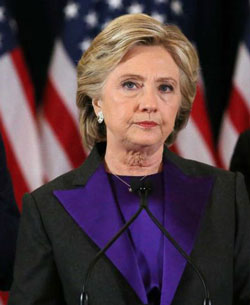 You’ll notice that voting for Trump and Hillary broke along cultural lines. The Republicans won the rural areas (which are dropping in population); the Democrats won the cities (which are growing). The Reps are white (and becoming no more than a plurality); the Dems have most of the so-called “people of color”, who used to be called “colored people” (and are becoming a majority). The Reps did better with males; the Dems better with females, who tend to see the world in softer and gentler shades. The Reps are favored by native-born Americans; the Dems are favored by immigrants, who often have very different values. The Reps represent the diminishing middle-class; the Dems represent the growing underclass. The Reps did better with older people, who are on their way out; the Dems did better with younger people, indoctrinated by academia and the media, who are on their way up.

None of this looks good for the future of traditional American culture. In fact, Hillary won the popular vote. That means, demographics being what they are, the Republicans are in more trouble next time. With current immigration and birth patterns, the constituency of the Democrats should gain about 2% every four-year election cycle in the future. Even more important, as we leave the eye of the storm that started in 2007, and go into the trailing edge of the economic hurricane, the Trump administration will be blamed. There will, therefore, be a radical reaction away from what it’s believed to represent in 2020.

It used to be the Reps and the Dems differentiated mostly on ideological grounds. Now it’s much more on cultural grounds. Let’s identify the elephant in the room, and spell out the real nature of the Democratic Party.

The Democratic party is a cesspool filled with leftist social engineers, academics, busy-body pundits, the “elite”, cultural Marxists, race baiters, racial “minorities” who see race as their main identity, radical feminists and LBGT types, entitled underachievers, statists, the soft-headed, the envy-driven, the stupid, professional losers, haters of free markets, and people who simply hate the idea of America. One can’t imagine anyone of good will, or even common decency, being a member of today’s Democratic Party. It needs to be flushed. But it will only get stronger in the near future, for many reasons.

But it’s an honest party – they generally say what they believe, even if it’s repulsive to anyone who values things like liberty. Interestingly, there are no Dinos – unless they’re Stalinists or Maoists who think the others aren’t going far enough. The party has absolutely no redeeming values.

A real battle for the soul of the country is shaping up. But it won’t be heroic, so much as sordid. The knaves versus the fools. The Dems are the evil party, but the Reps are just the stupid party.

Why? Trump and the Trumpers have no ideology except a vision of a vanished world. They’re understandably angry, but don’t know what to do about it. They have no real program, except to say the Dems have gone too far. No coherent philosophy, just a nebulous belief that the Democrats are wrong. They’re justifiably fed up with the Establishment that gave them non-entities like Dole, McCain, and Romney.

Why did Trump win? Two reasons.
First, “Cultural Americans” know that their culture is dying, and their standard of living is declining. They sensed – correctly – that this would be their “last hurrah”. Trump is likely the last white male president. Unless a rabid statist like Tim Kaine is elected in 2020, with promises of a new and more radical New Deal. Or ongoing wars tilt the odds towards a general, most of whom are still white males.

Second, don’t forget that Trump wasn’t the only protest candidate in the primaries. There was Bernie. His supporters know that Hillary and the Dem insiders stole it from him, and they’re still very unhappy. Many abstained from voting for Hillary because of the theft. A few probably voted for Trump out of spite. Or because they wanted to burn the house down. Nobody says this.

Perversely, they’ll get their wish. The Greater Depression will deepen under Trump, even if he makes the right moves. Which will play into the election of someone from the Democrat cesspool in 2020. So maybe the Trump victory isn’t such a good thing after all.

Iran raps US overt military support for terrorists